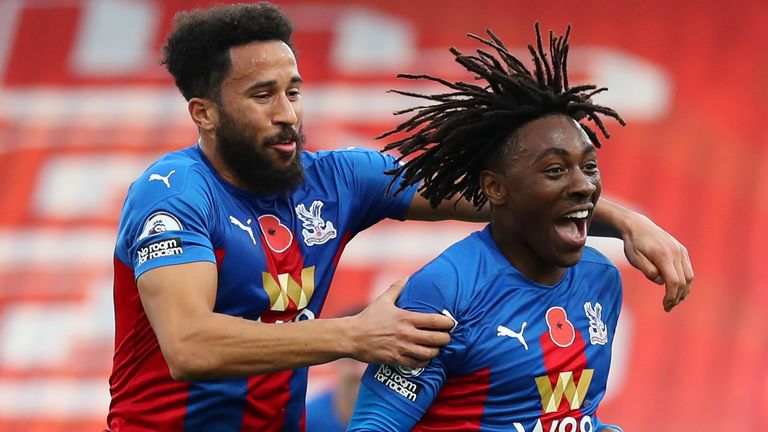 Crystal Palace moved up to sixth in the Premier League as Ebere Eze inspired them to a fine 4-1 win over Leeds United at Selhurst Park.

It was a case of deja-vu for Leeds, on the wrong end of a 4-1 defeat having lost by the same scoreline to Leicester last Monday despite dominating possession. Bielsa’s side were ultimately well beaten by a much-improved Palace, although they were justifiably aggrieved at a Patrick Bamford ‘goal’ being disallowed at 1-0.

Scott Dann’s first goal since December 2017 gave Palace an early lead (12), as the centre-back rose to head beyond Illan Meslier from Eze’s corner. Eze, making only his fourth league start since his £19.5m switch from QPR last summer, then produced a brilliant free-kick to extend Palace’s lead (22).

That came after Bamford had seen an equaliser ruled out for offside by VAR, but the Leeds striker thrashed in his seventh Premier League goal of the season to reduce the arrears (27). Helder Costa inadvertently stabbed Patrick Van Aanholt’s cross past Meslier at his near post prior to the break (42) before Jordan Ayew sealed the victory with a cool finish from Wilfried Zaha’s pass (70).

The result leaves Leeds in 14th place ahead of the remaining weekend fixtures, while Palace are sandwiched between Everton and Wolves on 13 points. Man of the match: Eberechi Eze.

This was billed as the battle of the oldest managers in the division, Roy Hodgson and Marcelo Bielsa, both of whom guided their clubs to 10 points from seven games respectively.

Both have coached across the globe over the last 40 years, with spells in several European leagues and on the international scene, but this was the first time they went toe-to-toe on the touchline – and the encounter didn’t disappoint. Palace went ahead after 12 minutes through an unlikely source in Dann. Eze floated a corner in from the left and the stand-in captain was able to guide a header past Meslier in the Leeds goal.

It was just reward for a bright start by Hodgson’s men. Leeds then thought they had levelled five minutes later, but Bamford’s fine flicked finish over Vicente Guaita was ruled out for offside by video assistant referee Mike Dean.

Crystal Palace make three changes for the visit of Leeds with James McArthur, Ebere Eze and Jordan Ayew recalled to the starting XI. Eagles captain Luka Milivojevic was sent off at Wolves and serves the first of a three-match ban while Jeffrey Schlupp and Michy Batshuayi drop to the bench for Roy Hodgson’s men.

Leeds, who also lost last time out to Leicester, have Ezgjan Alioski and Pascal Struijk back in the team with Marcelo Bielsa leaving Pablo Hernandez and Jamie Shackleton out of the matchday squad. Raphinha and Jack Jenkins take up their positions on the bench for the clash between the two oldest managers in the division.

It looked like the striker was onside – and Palace took full advantage of the reprieve as Eze doubled Palace’s lead with 22 minutes on the clock to continue his fine afternoon.

Mateusz Klich went down but the hosts carried on and won a free-kick on the edge of the visitors’ area. Eze took responsibility and curled his shot into the top corner for his first Palace goal. 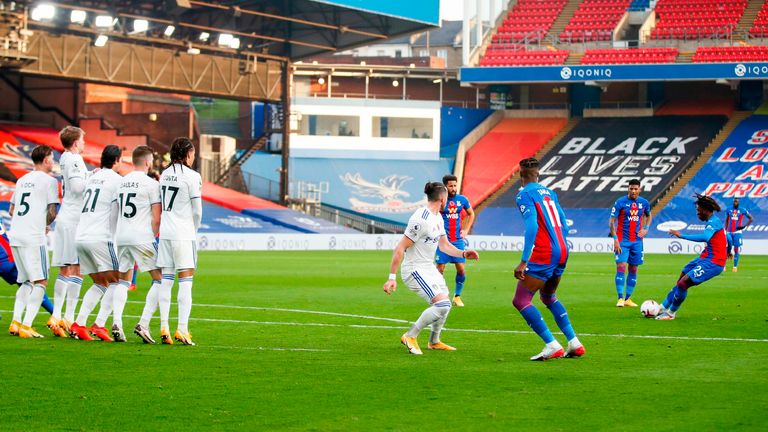 The drama didn’t end there in the opening period as Bamford pulled a goal back for Leeds in the 27th minute. Klich headed down for the one-time Palace loanee and he controlled with his chest before firing past Guaita.

It was Bamford’s seventh goal of the campaign and got the visitors back in the contest with more than an hour left to play.

His side ought to have halved the deficit when Pascal Struijk failed to connect well with Jack Harrison’s corner six minutes into the restart, before the lively Eze flashed another swerving shot just wide of Meslier’s left-hand post. With little sign of a comeback being staged, Tyler Roberts was introduced by Bielsa, as Guaita was called into action to tip Ezgjan Alioski’s low drive around the post.

Leeds were then thankful to Alioski tracking back to deny Wilfried Zaha a clean strike at goal as the game continued to resemble a basketball match in the final third.

Leeds were pressing and pushing to set up a tense finish, but they were punished with Palace finding a fourth through their out-ball as Wilfried Zaha unselfishly picked out Ayew for a composed finish underneath Meslier. It was the 17th goal Leeds have conceded already this term, undermining their bright return to the top flight. Crystal Palace boss Roy Hodgson: “The most important thing in football is to ensure your team score one more than the opposition, but it’s always nice to score four.”

On Bamford’s disallowed goal: “There’s decisions every week where there are decisions that are contested, but unfortunately you’re speaking to the wrong man if you want sympathy for tight calls as we’ve suffered so badly in the last two or three games through offside goals. We’ve also suffered from a VAR call that has seen us lose our captain for three games.

“VAR was something that was talked about for a long time, but what it’s done is replaced is the trial by television. It’s now just trial by the referee’s television. Every goal scored has been carefully analysed in the past by pundits, and referees have been accused of getting things wrong. Now, it is referees in Stockley Park doing the same thing.” Leeds boss Marcelo Bielsa: “The defeat is fair, but the difference is exaggerated. The goals that Palace scored arrived at a time when we deserved to score ourselves. I never like to discuss the decisions of the referees. I don’t want to comment on it [Bamford’s disallowed goal].

“The performance in the last game wasn’t satisfactory, as we left a lot of space for criticism but this game had other characteristics, both individually and collectively – in all aspects.

“The opposing left-back [Patrick Van Aanholt] was dangerous, while the other full-back didn’t really win his duel. We had a lot of activity on both wings, but when we attacked, their full-backs were well protected in reduced spaces. They had more space in which to attack.

“All defeats are complicated, and when there are two defeats in a row, it increases how complex things are. In all games, if we concede four goals and only score one, it’s going to be a hard reality.”

Man of the match – Eberechi Eze This was the fifth time Eze both scored and assisted in a single league game and the first time since a goal and assist against Preston in March 2020.

He has been used rather sparingly by Hodgson so far, but having learned from senior members around him, the Crystal Palace midfielder now looks ready to have a significant impact in SE25.

It wasn’t just his superb goal and assist. The 22-year-old made more tackles (5) and interceptions (4) than any of his team-mates, and produced more crosses (4). “I’ve been impressed by Palace as they’re a good side. I’m enjoying the front three in particular in Zaha, Ayew and Eze, whose getting better every time I see him. They look solid in the middle of the park.

“Palace are lively up front and the way Leeds play, they were always going to give up chances which Palace took. They’re looking the part.”

On Bamford’s disallowed goal: “It’s a scandalous decision. I know referees make mistakes, and they did before VAR, but they’re now getting the opportunity to look at things and are still getting things wrong. Not only would it have got Leeds back into the game, but it was a wonderfully worked goal.

“It was a shame as it was a very good game to watch. The one thing we’ll be talking about again is VAR as Leeds and Bamford have been cheated out of a very good goal.”