Derby’s unbeaten run under Wayne Rooney continued but they are still searching for a first home win of the season after Stoke held them to a 0-0 draw at Pride Park.

County dominated for most of the game but lacked quality in the final third and have now scored only eight goals in the Championship.

The closest they came was when Colin Kazim-Richards was denied by a first-half goal-line clearance by James Chester, although Matt Clarke saw a second-half header tipped over.

Stoke, who were again without a number of key players, created little and did not force David Marshall into a save in the 90 minutes. 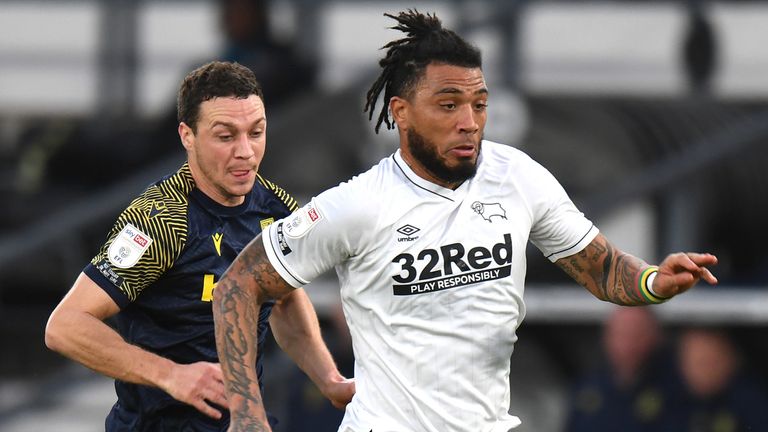 Derby are now unbeaten in five since Rooney became interim manager but they remain in the bottom three.

The Rams started positively with Tom Lawrence testing Josef Bursik with a dipping shot in the eighth minute.

Kazim-Richards got in behind Stoke but was offside as Derby continued to threaten and the striker had a great chance to open the scoring in the 22nd minute.

Lee Buchanan played a great ball from deep in his own half to put Kazim-Richards in but after he went round Bursik, his shot was cleared off the line by Chester.

Stoke were struggling to get out of their own half but Derby were forced into a change when Lawrence limped off in the 33rd minute with an ankle injury.

The visitors at last posed a threat in the 36th minute when Nathan Collins curled in a cross that Steven Fletcher was unable to control on the edge of the six-yard box.

But Derby were dominating possession and Kazim-Richards played in Lawrence’s replacement Morgan Whittaker in the 42nd minute but his deflected shot was easily saved.

Stoke had to improve in the second half and they did, forcing Derby back and getting crosses into the box.

Derby thought they should have had a penalty in the 65th minute when Buchanan went over but referee Andy Woolmer baffled everyone by awarding a drop ball to Stoke.

It seemed to inspire Derby who twice went close, first through Clarke from a Martyn Waghorn free-kick and then Kamil Jozwiak who had a shot blocked.

The Polish winger then had a shot deflected over as Derby reasserted themselves and Bursik made a superb save in the 82nd minute to turn over a Clarke header.

Derby brought on Jordan Ibe for his first appearance since joining the club in September but despite five minutes of stoppage time, could not get that elusive win.

Bellerin explains what Martinelli does that impresses Arsenal team-mates