Borussia Dortmund left enraged by decision to rule out Jude Bellingham goal for a foul on Ederson, with referee blowing his whistle BEFORE he scored so VAR could not overrule it – as England midfielder insists: ‘I won the ball fairly’

Jude Bellingham revealed his confusion at the decision to stop play instead of allowing him to score a crucial goal for Borussia Dortmund last night.

Bellingham had robbed Manchester City goalkeeper Ederson of possession and strode towards goal to net before half-time of the Champions League quarter-final first leg.

But Romanian referee Ovidiu Hategan blew for a foul before Bellingham tapped into an empty net and the move could therefore not be reviewed by VAR. 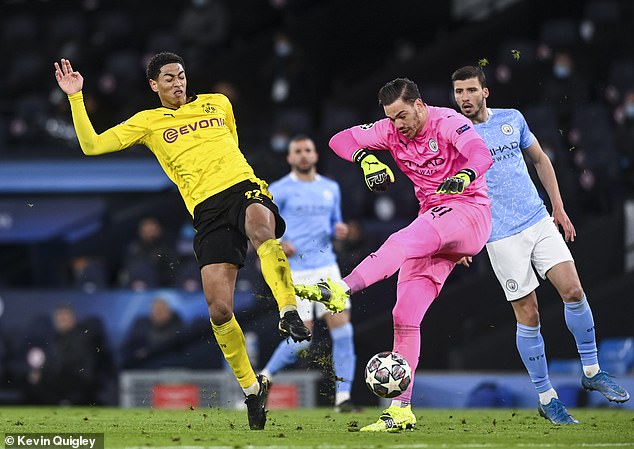 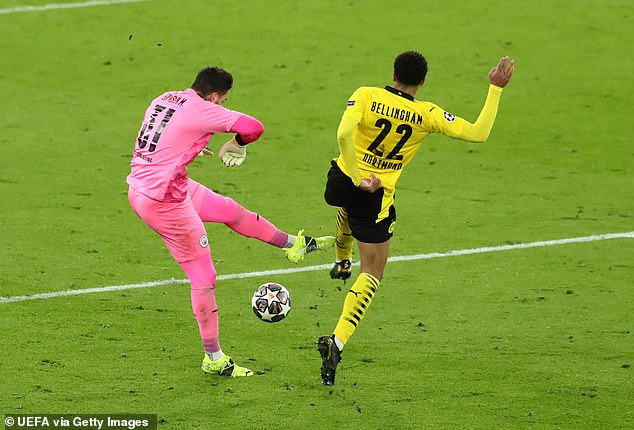 Jude Bellingham and Borussia Dortmund were denied a clear equaliser.

Manchester City goalkeeper Ederson tried to be clever in flicking the ball up before clearing it, but Bellingham got to it first. He stole possession – fairly – then had an entirely empty goal to score into.

Romanian referee Ovidiu Hategan had an unblocked view but felt there had been a foul and so blew his whistle. Replays showed this wasn’t the case.

Unfortunately for Bellingham, VAR couldn’t come to his rescue, because the whistle was blown before the ball crossed the line.

Remember how Lewis Dunk’s goal in the Premier League for Brighton didn’t stand because the whistle was blown before it went in? That was what happened here, too. It prevented VAR from being able to intervene.

‘I definitely think I won the ball fairly,’ Bellingham said. ‘All I got told is that I’d got booked and it was a free-kick. I had my studs up apparently.

‘They’ve got so many cameras and TVs watching but didn’t wait for me to then check it. You’ve got to get on to it.’

During a mature interview on BT Sport, the 17-year-old England international joked he suffered a cut to his knee spending the night chasing Kevin De Bruyne, who scored the opener.

Marco Reus equalised but Phil Foden’s late winner gives City a slender one-goal advantage ahead of next week’s second leg out in Germany.

‘We frustrated them well when they had the ball,’ Bellingham added.

‘They found it hard to break us down. Our goal is a brilliant bit of play. We’re disappointed to concede so late but we’ll try to use that away goal next week.

‘City are brilliant, one of the best teams in the world – if not the best. It’s frustrating but we’ll move on.’

Former Citizens players Owen Hargreaves and Joleon Lescott also spoke frankly about their frustration with the decision on BT Sport at half-time.

Hargreaves said: ‘The ref blows his whistle too early. Bellingham gets to the ball first, he wins it, if anything Ederson fouls him!

‘When you’re a player you know if you won the ball and he knew.’

‘He (the referee) had two big calls in the game, he got them both wrong. Dortmund will be furious.’ 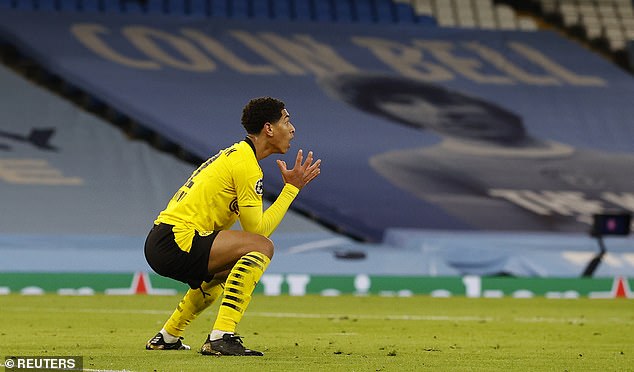 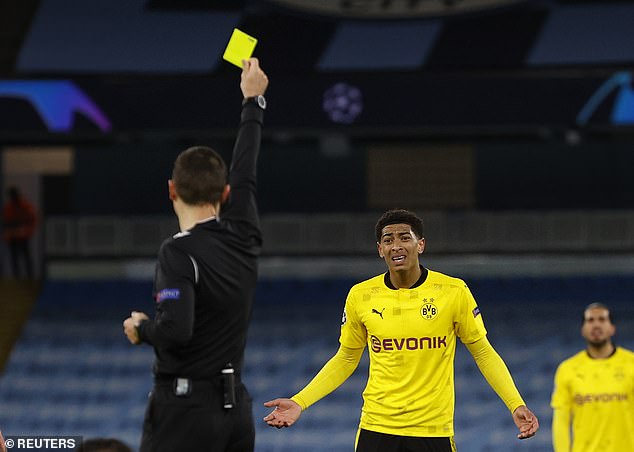 The official, bizarrely, gave the 17-year-old midfielder a yellow card for his role in the incident

Lescott added: ‘Even the decision to give Rodri a penalty, you can tell the referee is a bit overwhelmed.’

Bellingham’s Dortmund team-mate Jadon Sancho, who will miss both ties against Pep Guardiola’s side due to injury, tweeted his perplexed response during the match.

Former Birmingham player Bellingham later posted a picture showing him with a toe on the ball, followed by an eyes emoji and a full stop.

City boss Pep Guardiola, who watched his side squander a number of presentable opportunities, promised his side will not sit back on the lead next week.

‘The first half we weren’t clever with the ball,’ Guardiola said. ‘The second half was much better. We have to analyse this game and we’re going there to score goals and to win it.’