Match report as Adrian Sporle fires in from 14 yards after 61 minutes to keep the points at Tannadice; Dons extend a dismal record to one win in 10 and one goal in 10 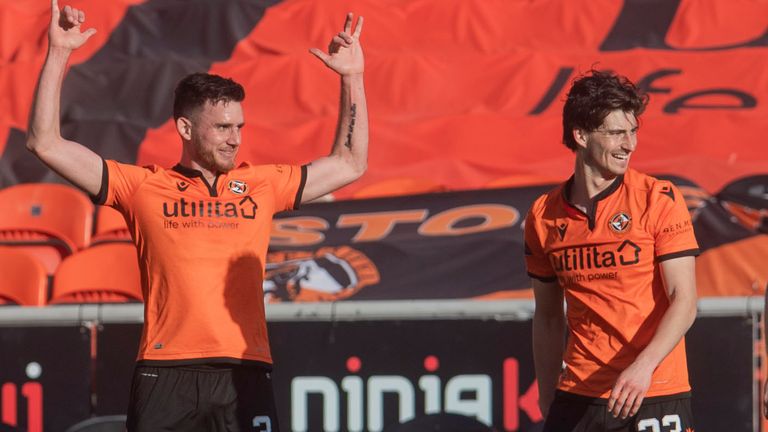 It was an open and relatively enterprising encounter but as the second half wore on, it looked like both sides could be on their way to the third goalless draw of the season.

However, in the 61st minute, Argentinian defender Sporle, back in the side for Nicky Clark, fired in from 14 yards to keep the points at Tannadice, although Micky Mellon’s side will play their post-split games in the bottom half of the Scottish Premiership after finishing eighth.

Pittodrie youth coach Paul Sheerin, along with Barry Robson and Neil Simpson, was in temporary charge of the visitors following the recent departure of Derek McInnes and assistant Tony Docherty but fared little better as the fourth-placed Dons extended a dismal record to one win in 10 and one goal in 10.

The home players chose not to take a knee pre-kick-off to stand in solidarity with Rangers midfielder Glen Kamara, who claimed to have been racially abused by Slavia Prague’s Ondrej Kudela during their Europa League clash at Ibrox on Thursday night, with the Tayside club confirming the stance in a statement.

Amid a lively start from both sides, it was the Dons who first came close to taking the lead. 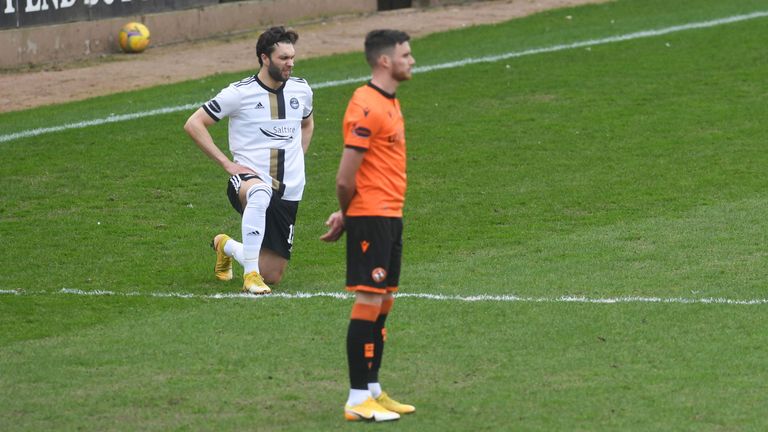 Connor McLennan, back in the side along with Dean Campbell and 20-year-old defender Jack MacKenzie, who was making his debut, sent in a cross from the right which found Campbell.

His goal-bound shot was blocked by Terrors defender Ryan Edwards, the ball spinning and clipping the outside of the post for a corner, which ultimately came to nothing.

Then, in the 19th minute, after United captain Mark Reynolds lost possession in his own half, Campbell tested ‘keeper Ben Siegrist with a long-range drive, before United’s Jeando Fuchs fired a drive over the bar. 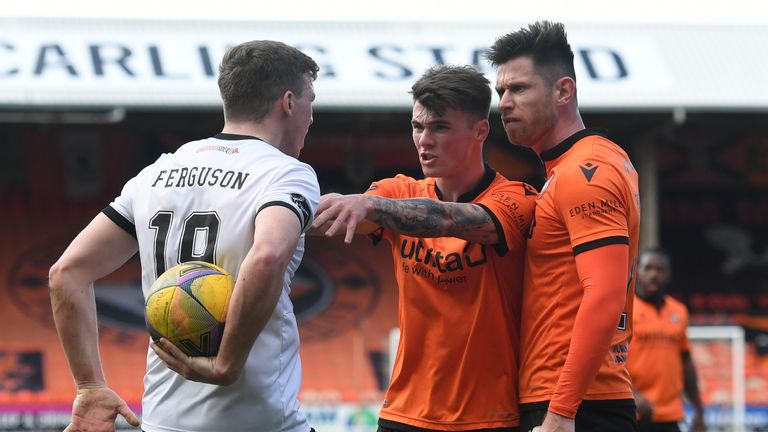 There was a moment of Aberdeen panic in the 37th minute when Joe Lewis’ slack clearance landed at the feet of United’s Calum Butcher who quickly fed Lawrence Shankland.

As the Dons ‘keeper found himself in no-man’s land, he was beaten by the United striker’s chip but defender Ash Taylor was handily placed on the line to clear.

Just before the hour mark, there was a penalty shout for United when an overhit corner struck Campbell inside the Aberdeen box but referee Greg Aitken pointed only for another corner, which again came to nothing

Then came United’s goal after Fuchs did well to keep the ball alive down at the corner flag under pressure from MacKenzie.

Shankland got involved in the move before cutting the ball back for Sporle to direct the ball past Lewis and into the far corner of the net for his third goal in three appearances.

Aberdeen tried all they knew to get back in the game. Campbell, Jonny Hayes and Flo Kamberi were replaced by Fraser Hornby, Callum Hendry and Matty Kennedy but to no avail and the whole club may have to return to the drawing board.

Dundee United are next in Scottish Cup third-round action on Saturday April 3 with a home tie against Partick Thistle or Cowdenbeath at 3pm. Aberdeen turn their attention to the same competition on the same date with a trip to either Dumbarton or Huntly.

Football: Manchester City must do better next season, says Guardiola