Elche 0-2 Barcelona: No Messi, no problem! Catalan giants move up to third in LaLiga with goals from Frenkie de Jong and Riqui Puig sealing win at Elche without suspended captain

Riqui Puig scored his first goal for Barcelona and made a point to his skeptical coach Ronald Koeman.

Barcelona beat strugglers Elche 2-0 to go back to third and it was the youngster’s late goal that will be most talked about.

Expectation has always been high around the 21-year-old but Koeman has never bought into the hype. He wanted him to go out on loan in the summer and had given him just 22 league minutes going into this game. 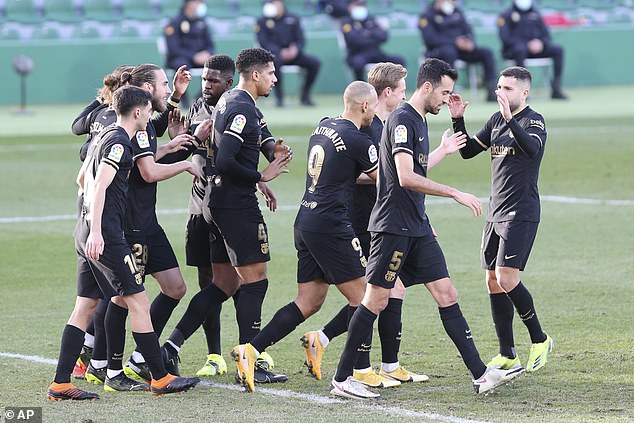 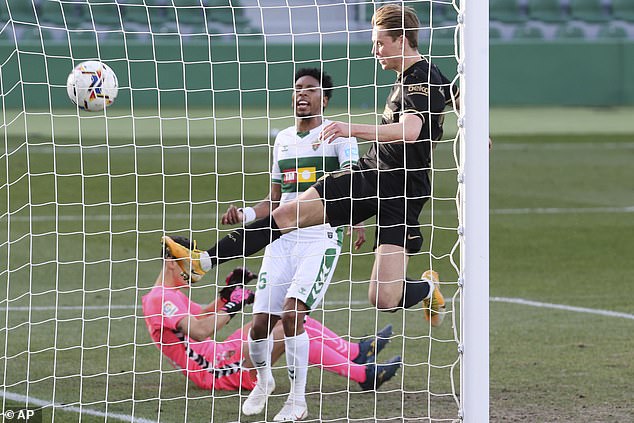 When he put him on with just three minutes left, it hardly felt like and opportunity but the midfielder took it heading in the second goal from Frenkie de Jong’s cross.

‘This is a difficult season for me because I’m not playing much but as my dad says, we just have to keep going, working and learning,’ said Puig.

‘We want the midfielders to get forward and score goals,’ said Koeman. ‘Riqui is not the biggest but he did well to get the header in very little time.’

Barcelona took the lead on 39 minutes with a goal that seemed Antoine Griezmann’s at first sight, then Diego Gonzalez’ and was finally given to Frenkie de Jong. He has never scored an easier one.

Martin Braithwaite did the hard work down the right receiving Pedri’s pass and crossing. Griezmann was poised to finish but Diego Gonzalez diverted it past his own keeper. De Jong followed the ball in and with only half of it over the line he got the final touch. 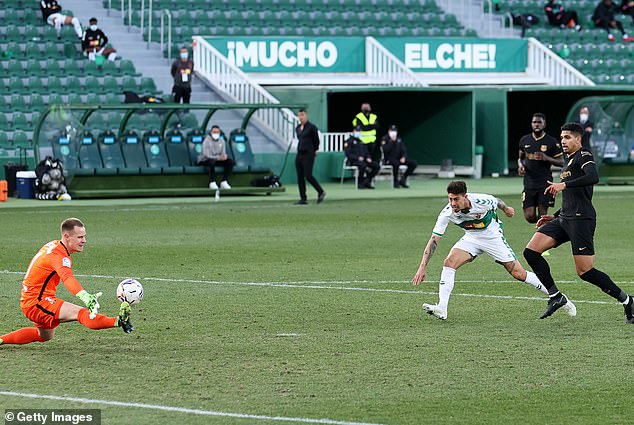 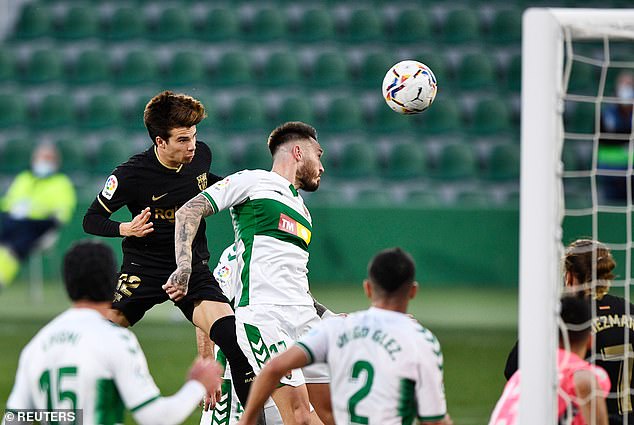 ‘I touched the ball before it crossed the line,’ said De Jong. ‘Since the new year we’ve been better. I can play better than this but I’m happy to have scored today.’

Barca were on top but they still needed Marc-Andre ter Stegen to keep them in front.

A breakdown in communication between Oscar Minguez and Ronald Araujo after Samuel Umtiti had played a high-risk ball across the pitch putting both under pressure. Emiliano Rigoni dashed between them but Ter Stegen spread himself and with an outstretched right boot blocked the forward’s shot.

Barcelona responded well and Pedri set-up Ousmane Dembele but Edu Badia got down well to his right to save. Pedri then set-up Griezmann but this time the Frenchman failed to test the Elche keeper.

Elche have not won since October and Barcelona took off Dembele sensing they had the victory despite the narrow margin. Pedri was still Barca’s best player and when he was brought down there were screams of ‘card!’ from the visitor’s bench desperate to protect a player who is fast emerging as their most important – especially in the absence of the suspended Lionel Messi. 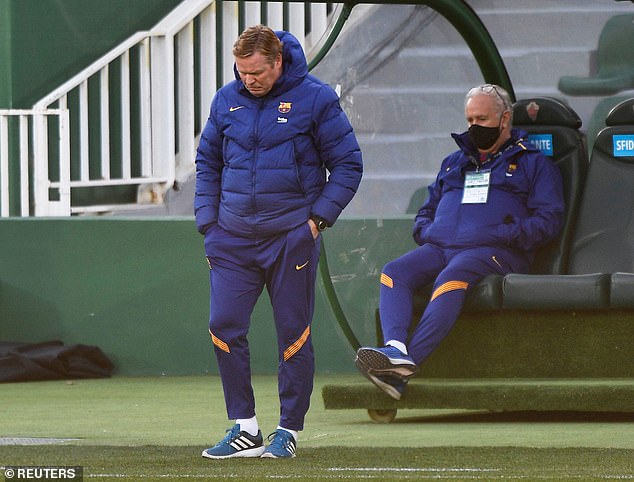 Ronald Koeman’s side have moved up to third in LaLiga, but are still seven points off the top

When 18-year-old Pedro was born Elche striker Nino was already scoring goals for Elche. The 40-year-old came on with eight minutes left to salvage something for the home side. But it was Barcelona who had their next chance with Francisco Trincao cutting inside from the right only for Badia to save his shot.

The Portugal winger has been underwhelming since arriving at the club in the summer but he was impressive today and he had the next chance when Pedri crossed and his header was saved by Badia.

Pedri was replaced by Puig with three minutes left but that was all he needed to make his mark. De Jong went down the right and clipped the ball back from the byline and he climbed high to nod it home.

It was Barca’s fourth straight away win and on a day in which Pedri, De Jong and Puig had all suggested Barcelona’s next generation midfielder is very much alive and well.