England train in Black History Month shirts ahead of their Euro 2020 qualifiers, as Gareth Southgate’s men threaten to walk off the pitch if subjected to racist abuse

England players have been wearing Black History Month shirts in training for their upcoming Euro 2020 matches against Bulgaria and the Czech Republic.

Their match in Sofia on Monday will see part of the Stadion Vasil Levski closed after Bulgaria fans were found guilty of racist behaviour against Kosovo and the Czech Republic earlier this year.

In the UK, Black History Month runs throughout October, and England’s footballers have been raising awareness with their choice of training kit. 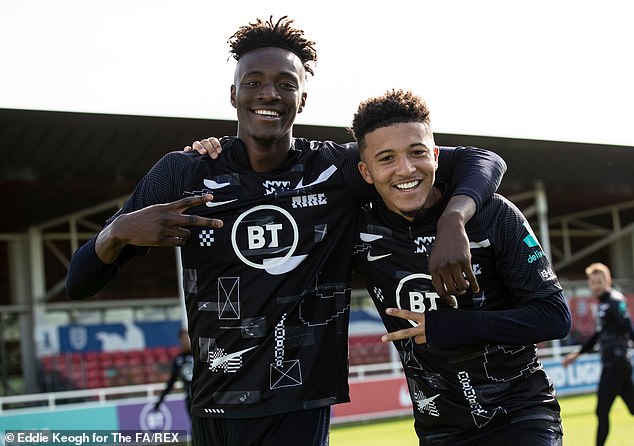 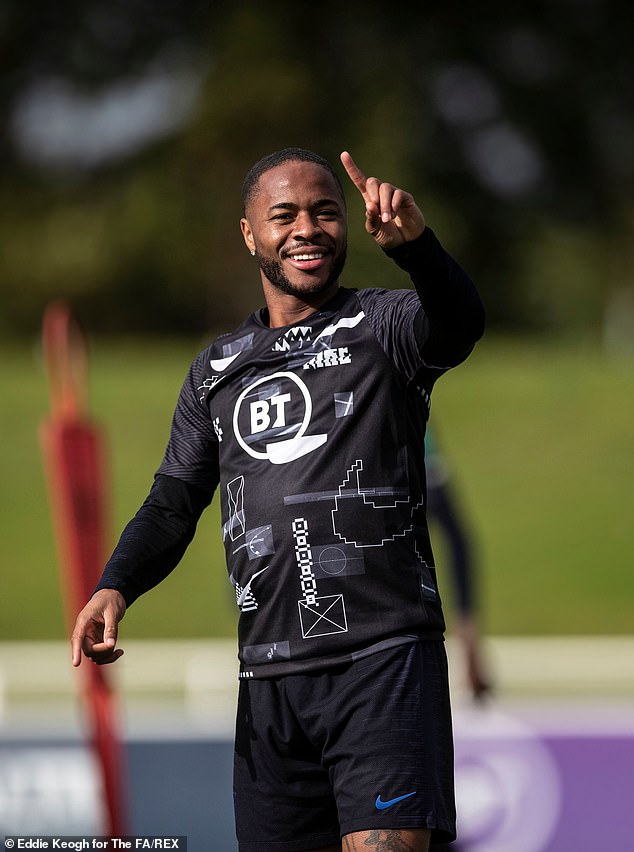 There have been multiple cases of racist abuse from fans in 2019, as players look for an end 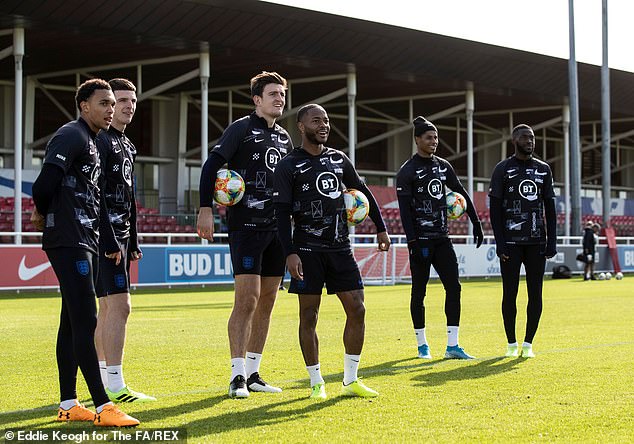 Striker Tammy Abraham has said that England’s players are ready to walk off the pitch if any of the players are not happy during the match.

Black England players were racially abused in Montenegro in March, but completed the game, winning 5-1.

A now iconic image saw Raheem Sterling cupping his ear to the crowd’s chants after scoring a goal. Multiple high profile instances of racist behaviour have come to light across Europe in recent months.

UEFA have a three-step protocol if racial abuse is apparent in a stadium: players must inform the referee; if taunts continue the stadium announcer will demand supporters stop; if chants continue the referee can lead the players off the pitch before deciding whether the match should restart. 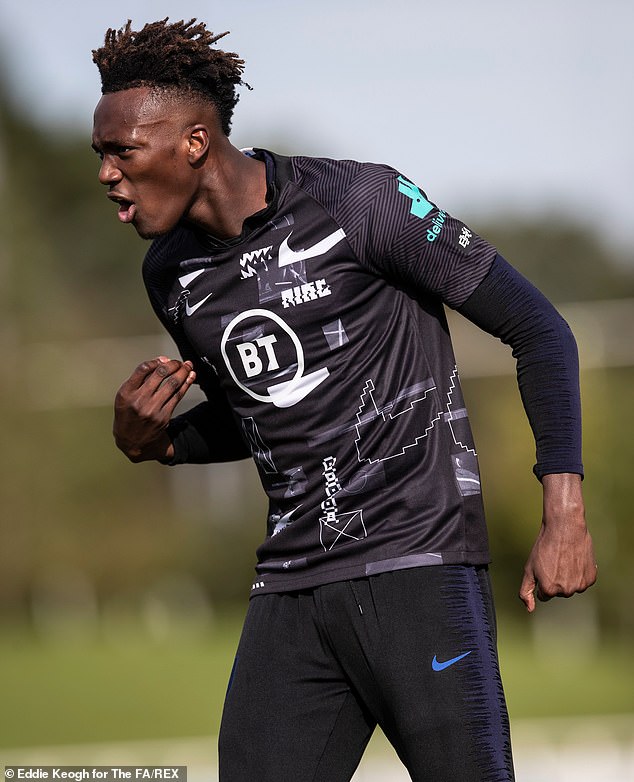 However, Abraham claimed that England were willing to take matters into their own hands if anyone felt uncomfortable.

‘We’ve had several meetings about it,’ said Abraham. ‘We’ve touched base on how to deal with the situation.

‘Harry Kane even said that if it happens and we’re not happy with it, we speak to the player and if he’s not happy, we all come off the pitch together.

‘We did speak about the three-step protocol. Harry Kane did ask the question about instead of going through the three steps, if we decide that we want to stop the game — no matter what the score is — if we’re not happy with it, as a team we’ll decide whether or not to stay on the pitch.’ 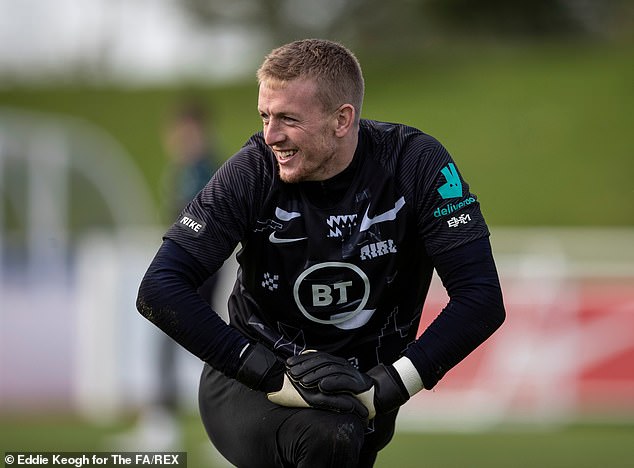 UEFA has a three step method for dealing with racism, but England are ready to bypass it 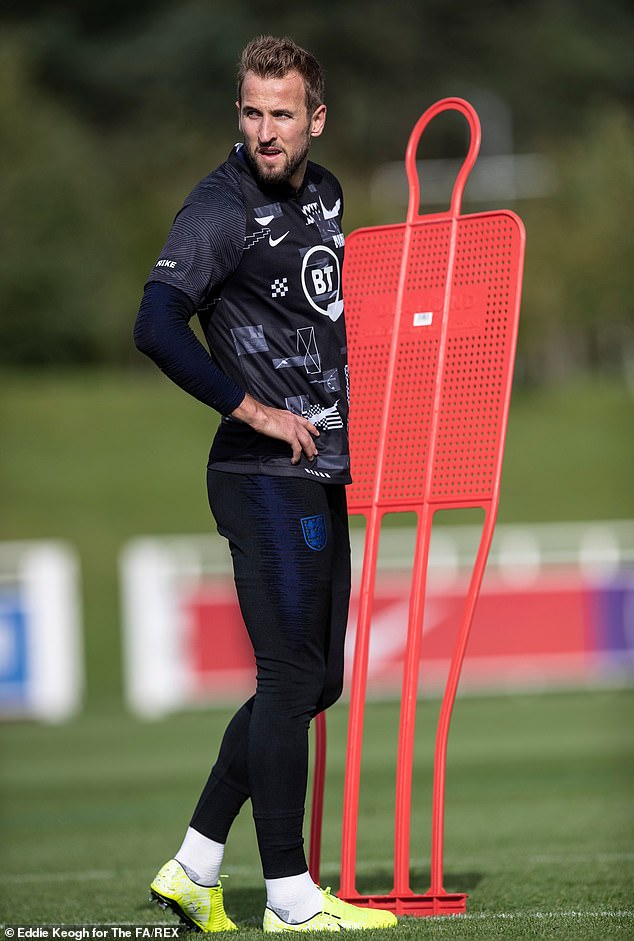 Asked if he believes players would follow through with a pitch walk-off, Abraham replied: ‘I do. Watching the gaffer speaking yesterday, he was quite keen on putting a stop to it.

‘No one wants (racism) in football. It’s not just affecting one person, it’s affecting the team. It’s a team decision if we decide in the end that we don’t want to play this game anymore because of what’s going on. We’ll come off as a team.

Intrepid non-league fans give their accounts of surreal Saturday