Eric Maxim Choupo-Moting has revealed his refusal to allow Paris Saint-Germain to succumb to another disastrous Champions League exit spurred him on to become the club’s unlikely quarter-final hero.

The former Stoke City forward was a late substitute at the Estadio da Luz with his side trailing Atalanta to Mario Pasalic’s opener when he was involved in Marquinhos’ 90th-minute equaliser, before netting the winner three minutes into stoppage time to secure a dramatic 2-1 win in Lisbon.

The win set up a last four showdown with either RB Leipzig or Atletico Madrid and kept alive their hopes of winning the title for the first time.

It capped an unlikely rise to prominence for the man who scored just five Premier League goals in 30 appearances for Stoke in the 2017/18 season – but the Cameroon international was confident he would make a decisive impact. Choupo-Moting said: “When I came on, I thought to myself, ‘We can’t lose, we can’t go home like that.’ I was confident in myself, confident in the team and then the rest is the history of Paris. We had a good feeling in the team. We’re enjoying good moments on and off the pitch.

“It was a crazy game, a tough game and opponents. I think we showed till the last moment that we believed in ourselves. It wasn’t easy because we had some good occasions that unfortunately we couldn’t score.

“We’ve already won four titles this season but the most important is this one. We really believe in ourselves and we did it today. Everybody knows we have top quality individuals, but we wanted to show it also as a team. It’s a big step today against a very good opponent. Respect to Atalanta, but I’m very happy we did it.” It has been some week for Paris Saint-Germain head coach Thomas Tuchel, who sat on an ice cooler for much of the game, restricted in his movement due to a protective boot.

The 46-year-old sprained his left ankle with a fracture of his fifth metatarsal playing sport last Thursday, which saw him added to a list of PSG injuries ahead of their last-eight encounter in the Portuguese capital.

After witnessing his side’s remarkable comeback, he said: “Imagine what I would have done [with my celebration] if I had two legs! Maybe today would be the day you would see me sprint for 40 metres. But it’s the club’s birthday today, exactly 50 years, so we will not forget this birthday.”

Including two domestic cup finals, this was PSG’s third competitive match in almost five months, and Tuchel admitted it was tough to get his side up to speed as they were frustrated for large periods on Wednesday.

“It was very difficult to prepare the team,” he added once the celebrations had subsided. “There was no rhythm because there were no games, but I could feel in the last days that the determination, enthusiasm and effort of the group, the quality of the training and the mix between love and hard work, was exceptional.

“For me, it was a deserved win, but if you score so late it was also luck – but I’m the first one to admit you need luck.”

There were just two minutes and 29 seconds between PSG’s equalising and winning goals, but for long periods it appeared like this would be the latest disastrous exit at the quarter-final stage for the Parisians. Back in 2017, they led 4-0 following their first leg with Barcelona only to be famously defeated 6-1 at the Nou Camp, while last season they were beaten 3-1 at home to Manchester United to bow out on away goals after winning 2-0 at Old Trafford.

But Tuchel felt his side had already turned a corner prior to Wednesday’s dramatic comeback that went some way to making up for those previous collapses.

He said: “I had the feeling that we closed it [the mental block in the Champions League] with the second match against Dortmund.

“It was this famous ‘we cannot reach the quarter-finals’ thing and suddenly we had a bad first game and a lot of bad news before the second leg, but we turned it around with no spectators.

“We are very happy to be part of it [this moment in the club’s history]. People from outside don’t realise how hard it is to reach all these goals, even if it seems easy with a good team and a big squad. But it’s a big effort and it’s a very big step for all of us.”

Gasperini: We were so close, really close It was a crushing end for Atalanta, who stood on the brink of a semi-final having lost their opening three group stage matches in their first Champions League season.

Their head coach Gian Piero Gasperini said: “I can only thank my players. We were so close, really close. The details make a difference in the Champions League. Some set pieces, a few moments, situations – the details that determine who progresses and who doesn’t.

“The introduction of Mbappe was decisive. There was not long to go and it seemed we had done it but when you play against some of the strongest in the world at a technical and athletic level then it becomes tough.” 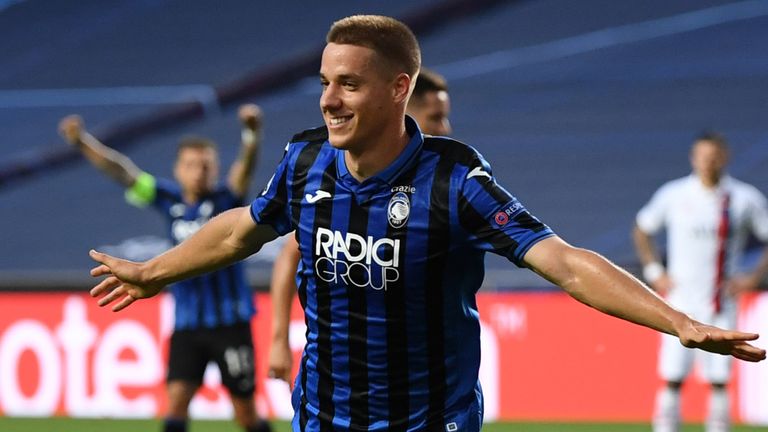 Atalanta’s adventure could hardly have come to a more heartbreaking conclusion but midfielder Marten de Roon admitted he and his team-mates will soon be able to look back on the campaign with pride.

He said: “At this moment, it’s quite painful. Tomorrow, I will be proud of our team and club, but at this moment, I feel disappointment.

“We played a good first half where we made if difficult for Paris, we put them under some pressure and had some minor chances.

“In the second half, we sat a little deeper. You have to defend with 11 men and we did it so well until this unfortunate moment in the last minute.”

PSG advance to face either RB Leipzig or Atletico Madrid at the Estadio Jose Alvalade in Lisbon on Tuesday.