Erik ten Hag says Anthony Martial is vital to Manchester United’s hopes of finishing in the top four but has to find a way of staying injury-free for the rest of the season.

Although Martial has resurrected his Old Trafford career under Ten Hag after a spell on loan at Sevilla, the Frenchman has only played six times this campaign due to hamstring, Achilles and back problems.

Martial made only his second start in Thursday’s night’s Carabao Cup tie against Aston Villa and scored in United’s 4-2 win, but is yet to complete 90 minutes. 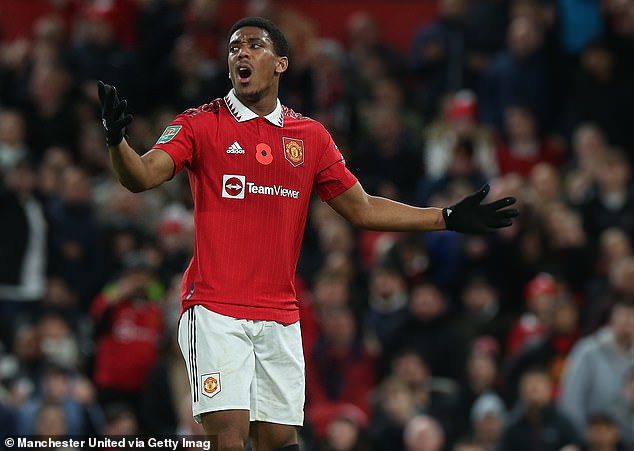 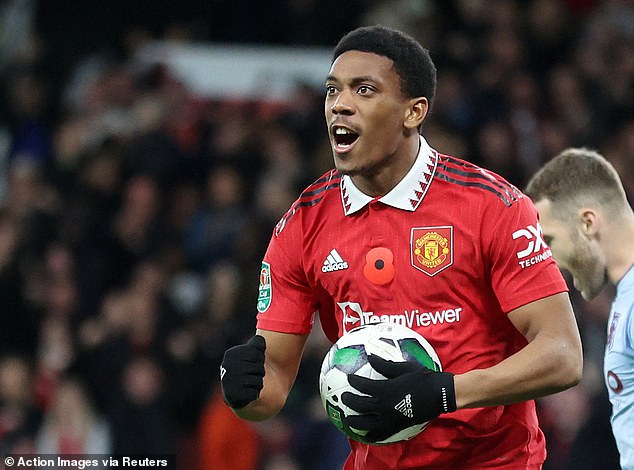 Ten Hag has been forced to start Cristiano Ronaldo in attack more than he expected, with top scorer Marcus Rashford also playing a central role on occasions.

Ten Hag believes that Martial is the preferred choice to lead United’s attack but the club have to work with the 26-year-old to keep him fit.

‘Of course, we analyse that as well and he’s analysing that: what can we do to change that?’ said the United boss. ‘We took some measures to do that, so it’s always when you often have injuries and illness, there is a reason.

‘Sometimes it’s also bad luck. He was really in a good way and then in the last 10 minutes against Atletico Madrid (in a pre-season friendly in Oslo) he got an injury and that really threw him back.

‘I’m so happy he’s back now and that we can manage him and that he stays fit because he is an important part of the squad. He plays very well in a lot of aspects of football, I’m happy with that, except his availability.

‘But we also have others and we have played with Marcus Rashford as the No 9. We also have Cristiano Ronaldo, so we have more options there. 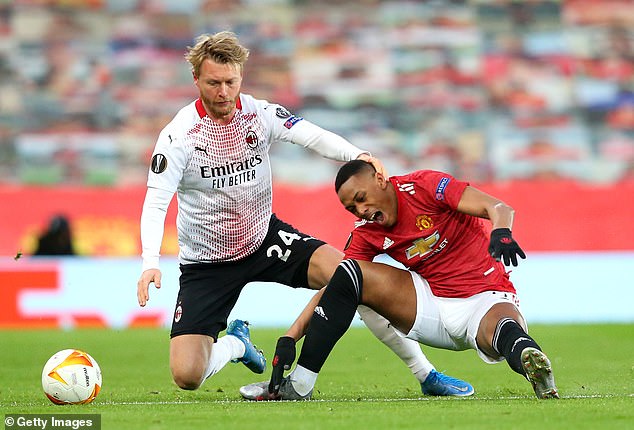 But he has only played six times this campaign due to hamstring, Achilles and back problems

‘It’s quite clear in my way of playing, I like the type that Anthony Martial is because he can hold the ball, he’s a target, he can link up, he can also run behind, he has speed, he can finish and he’s a good presser.’

Ten Hag believes that keeping Martial fit and sharpening up United’s attack will be crucial in the bid to qualify for the Champions League this season.

‘Definitely, yeah,’ he added. ‘In the front line, the availability of the players is a concern for us. We had so many games, like Newcastle United, Marcus Rashford ill.

‘We had to play some other games where we have to improvise to construct a proper offensive line. If you can’t do that, then it’s really difficult to get into the first four.

‘The front line is a concern. I think we really made progress in football, pressing, playing out from the back and also attacking, but we have to improve the final third of our game.

‘You need numbers available and we have to cover so many games that you need rotation, otherwise you don’t keep the players fresh. We need players who are available and at the highest level in the front line.’ 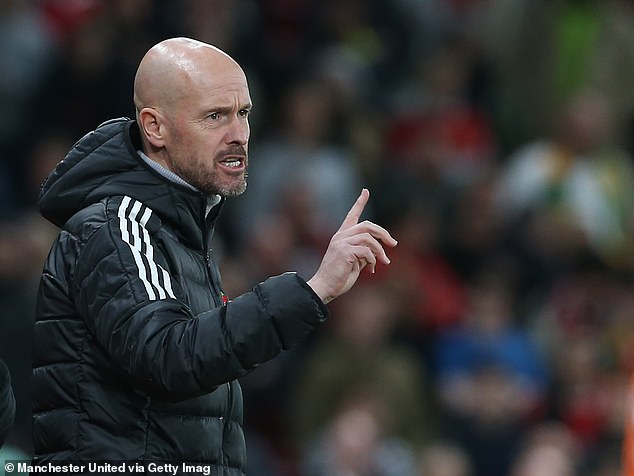 Asked if he was referring to his current squad or possibly a new signing in the January transfer window, Ten Hag replied: ‘Both.

‘But first look in our squad. We are happy, we have spoken a lot about (Alejandro) Garnacho and can he stay on this development path, can he keep on this line?

‘That would be a good contribution to this squad because we need him and we need others.’

Ronaldo and Antony missed the cup win over Villa through illness and injury respectively, but Ten Hag hasn’t ruled them out of Sunday’s trip to Fulham before they go to the World Cup.

‘I can’t guarantee that now, he (Ronaldo) was ill,’ said the Dutchman. ‘He can recover from that. It’s not a serious illness that takes days or weeks. I think it is possible that he is available for Sunday and that he will be in the squad.’

On Antony, he added: ‘We will work on that but I can’t confirm that he will be in the squad for Sunday. But he made progress in the last days and we will see if he will be available for the team on Sunday.’