Ernie Merrick's tirade against a referee communicating languages other than English in the A-League is not the first time he has launched such a complaint at the Spanish-speaking official.

The Scotland-born coach will likely escape punishment despite criticising referee Jonathan Barreiro for speaking Spanish to players from Latin America and Spain during the 1-1 draw at home to Perth Glory. 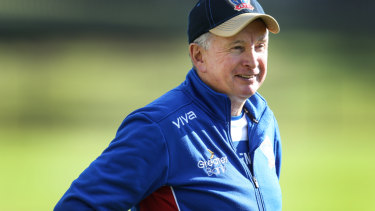 Having been infuriated with a decision from Barreiro to deny the Jets a penalty last weekend, Merrick took aim at the referee for not speaking English to all players. Barreiro is said to have explained decisions in Spanish to Perth Glory's Spanish duo Diego Costa and Juande, their Uruguayan striker Bruno Fornaroli and Newcastle's  Panamanian forward, Abdiel Arroyo.

I don't think that's appropriate. This is an English-speaking country, everyone speaks English.

After that outburst in the post-match press conference, Merrick doubled down on Tuesday, suggesting officials should only speak in English while officiating in Australia.

"I don't think that's appropriate. This is an English-speaking country, everyone speaks English apart from Arroyo," he said. "I think he should speak English, so we all know the instructions or details he is giving to Spanish players. He speaks in Spanish to players,  which means it's a confidential conversation."

Head of the A-League, Greg O'Rourke, was not surprised to hear Merrick's second tirade on Tuesday, and suggested the Jets boss had a longstanding issue with Barreiro communicating in Spanish to native speakers of the language during games.

The A-League has no issue with officials speaking languages other than English during games and applauded Barreiro's game management by communicating in such a way that players could understand decisions more clearly and quickly.

"It's a longstanding difference of opinion between Ernie and the league," O'Rourke said.  "It goes back to when the referee in question was fourth official and spoke Spanish to Gui Amor when he was the coach at Adelaide. Ernie objects to it," O'Rourke told The Herald.

"The referees and I find no problem with the use of bilingual conversations if the intent is to improve communications with players who have English as a second language. It is just good player management. He used Spanish on the weekend with players on both teams."

Communicating to players in different languages is common practice in Europe, South America and in international tournaments where officials are often multi-lingual. Despite the A-League's strict guidelines against criticism of officials, FFA sources suggested Merrick won't be sanctioned for his outburst.