The look on Lewis Dunk’s face said everything. Of all the moments and all the places to make a mistake, why here and why now?

With Brighton trying to find a way back into the game, Dunk inexplicably rolled into a pass without looking into an area of danger.

He knew immediately that danger loomed; he also knew that someone hoping to impress the England head coach should not be guilty of such an error. 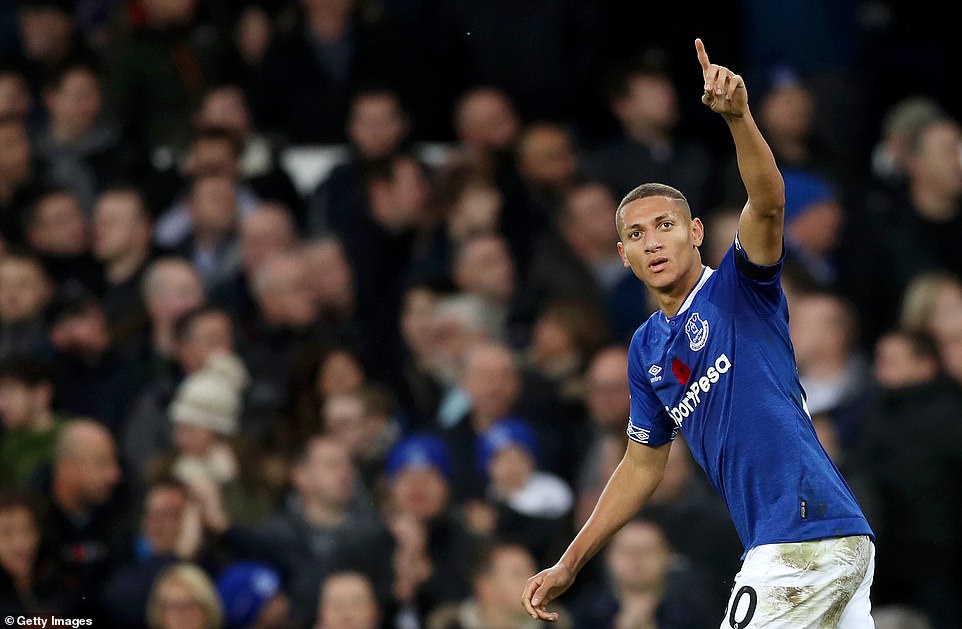 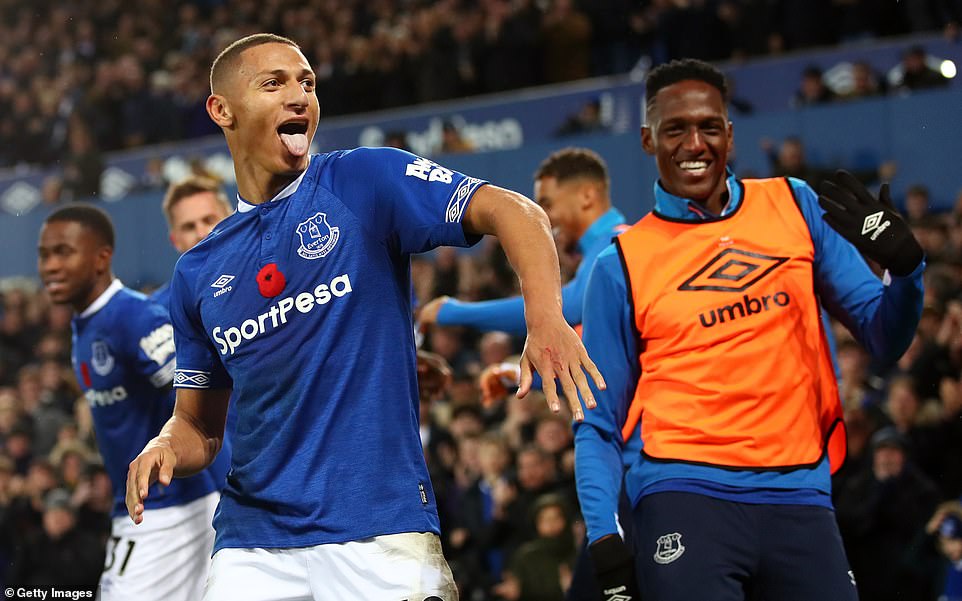 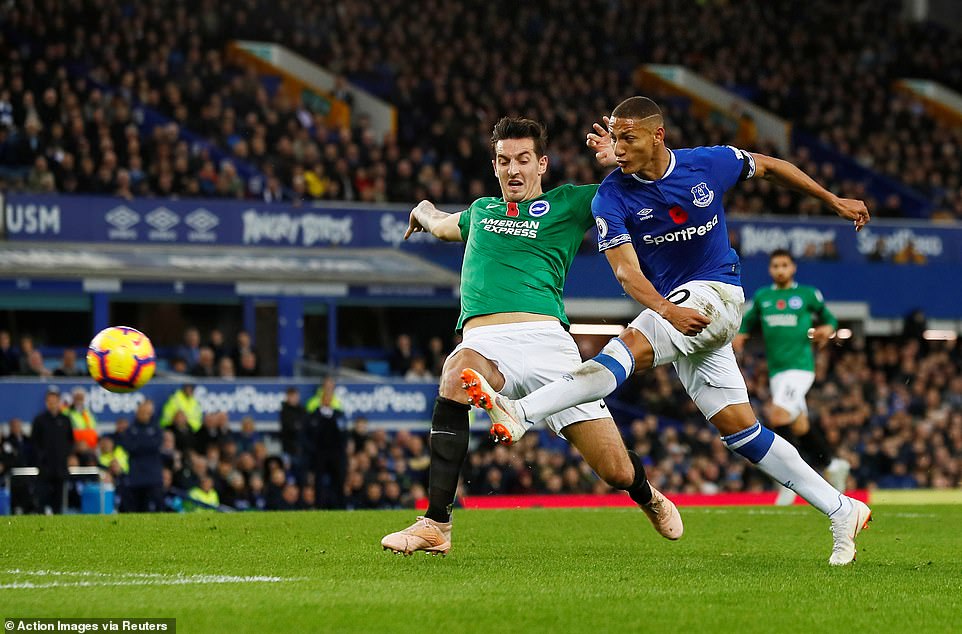 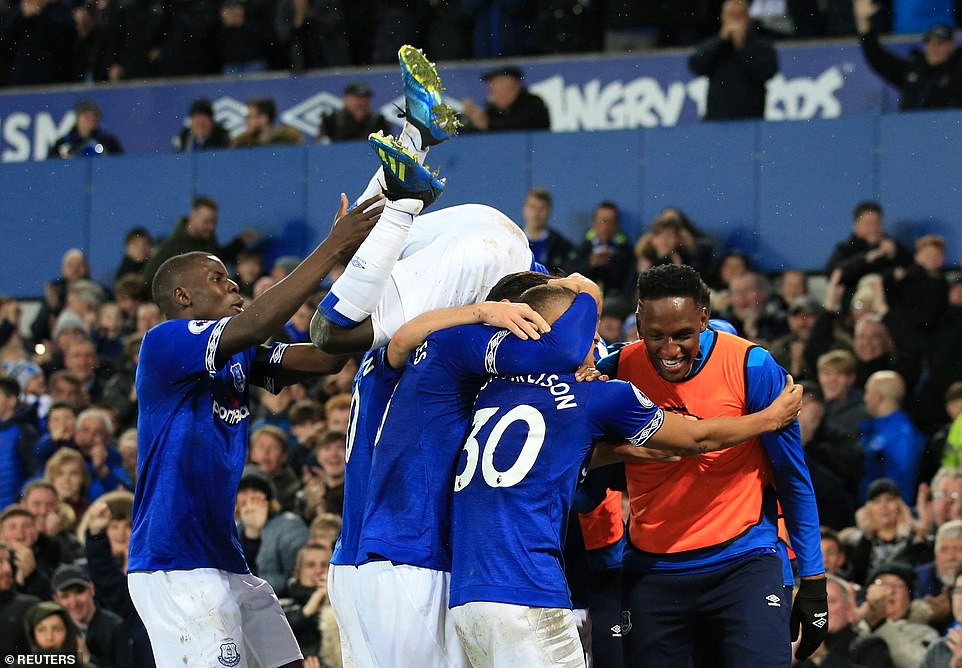 He then capped off the win with his second, Everton’s third, and he was mobbed by team-mates in the corner as fans cheered 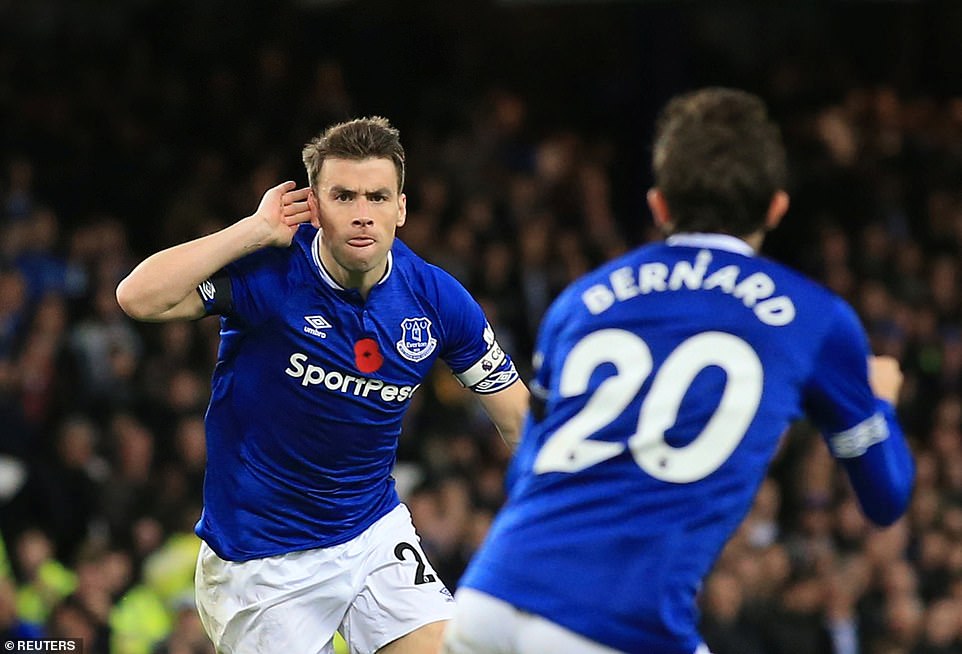 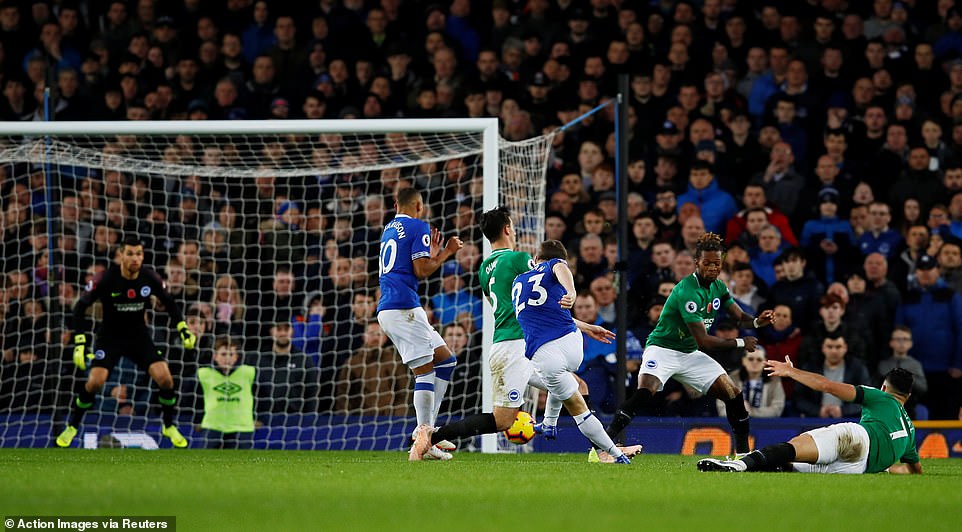 One man’s misery, however, is another man’s medicine and as soon as the ball had left Dunk’s foot, Richarlison was away, going through gears like a big cat on the scent of prey.

Once he locked onto the target, there was only going to be one outcome.

Richarlison is quickly establishing himself as the new darling of Goodison Park and here the bond strengthened further. Off he went, slaloming around Shane Duffy and dummying Brighton goalkeeper Mat Ryan to score his second of the afternoon and secure three points for Everton.

It was a super goal and wholly in keeping with the way Marco Silva’s side attacked all afternoon. If they play with this kind of verve from this point on, match days at this old stadium will become fun once more. Everton might have their faults but when it clicks they know how to play. 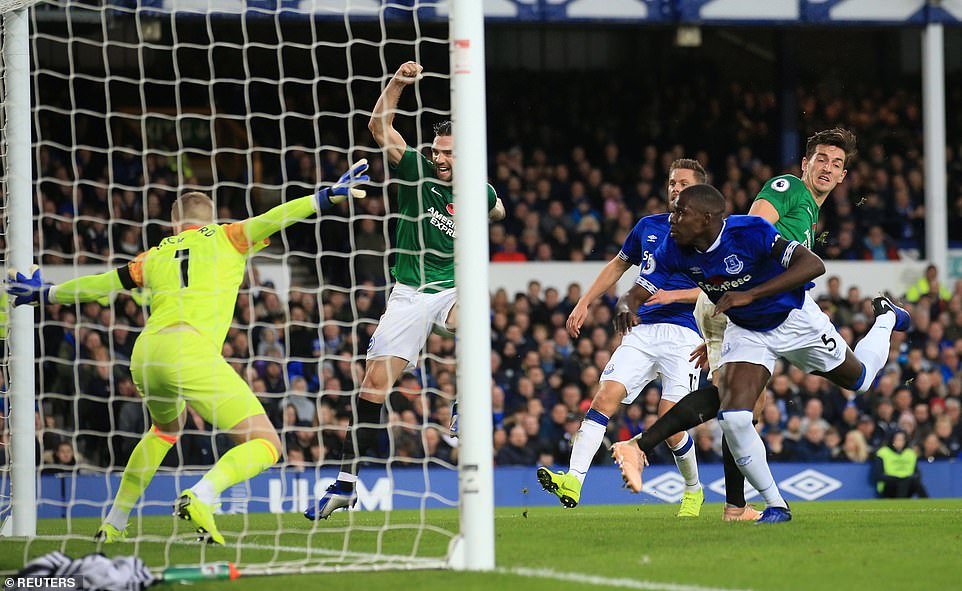 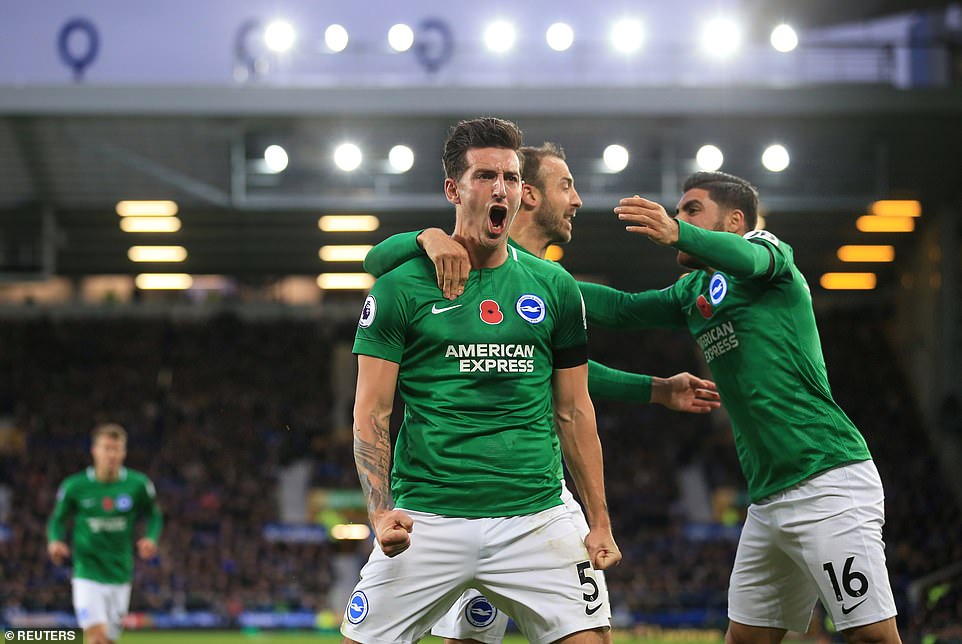 Everton dominated the opening exchanges and could have been two goals up within the first 10 minutes but Gylfi Sigurdsson’s range was completely out, as he scuffed one opportunity inside the penalty area then fired into the side-netting after good work by Lucas Digne.

The way they started gave you the impression that it was game they would dominate and with Michael Keane catching the eye in the heart of the defence – timely given that Southgate was in the stands – Brighton struggled to go the early pace.

It came as no surprise, then, that Everton broke the deadlock with a fine goal. From a Brighton corner, Sigurdsson scuttled up field, exchanged passes with Bernard on the left flank, before threading a ball into Richarlison and the Brazilian did the rest, fizzing a drive past Mat Ryan.

Such was the home crowd’s appreciation for the strike – Richarlison’s fifth of the campaign – there was an extra round of applause as it was replayed on the giant screen in the corner of the stadium. If that was sublime, though, the cheap way they squandered their advantage was ridiculous. 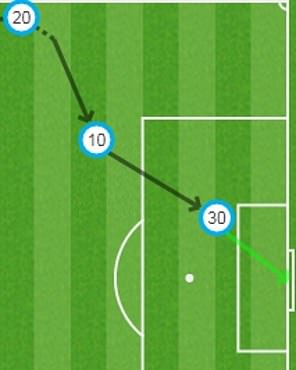 Richarlison’s opening goal came after a well-worked move down the left wing. Find out more stats in our dedicated MATCH ZONE right here. 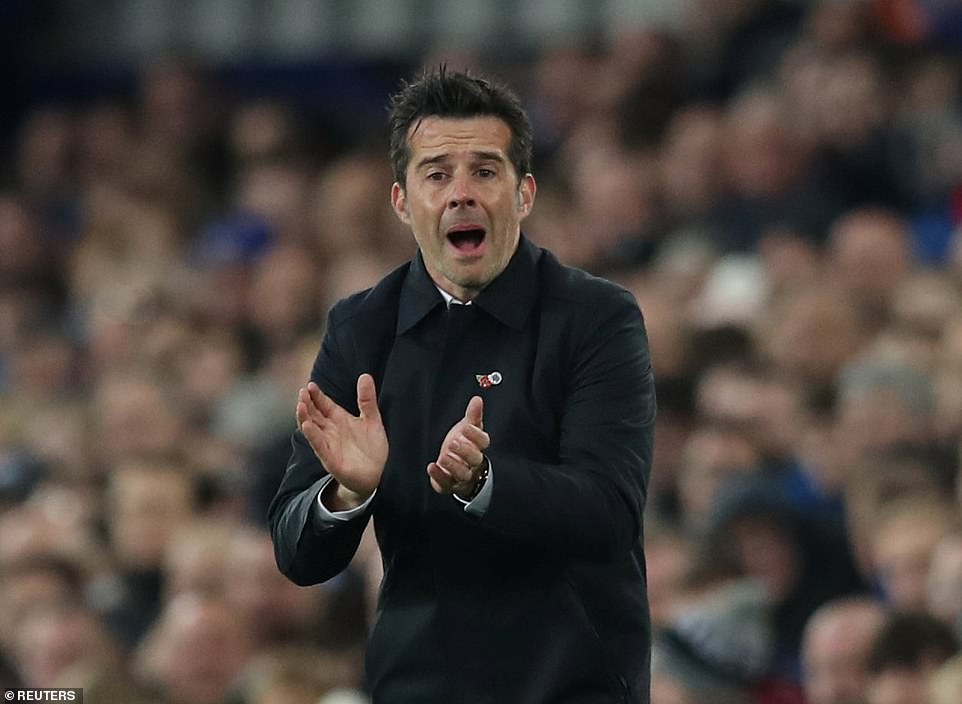 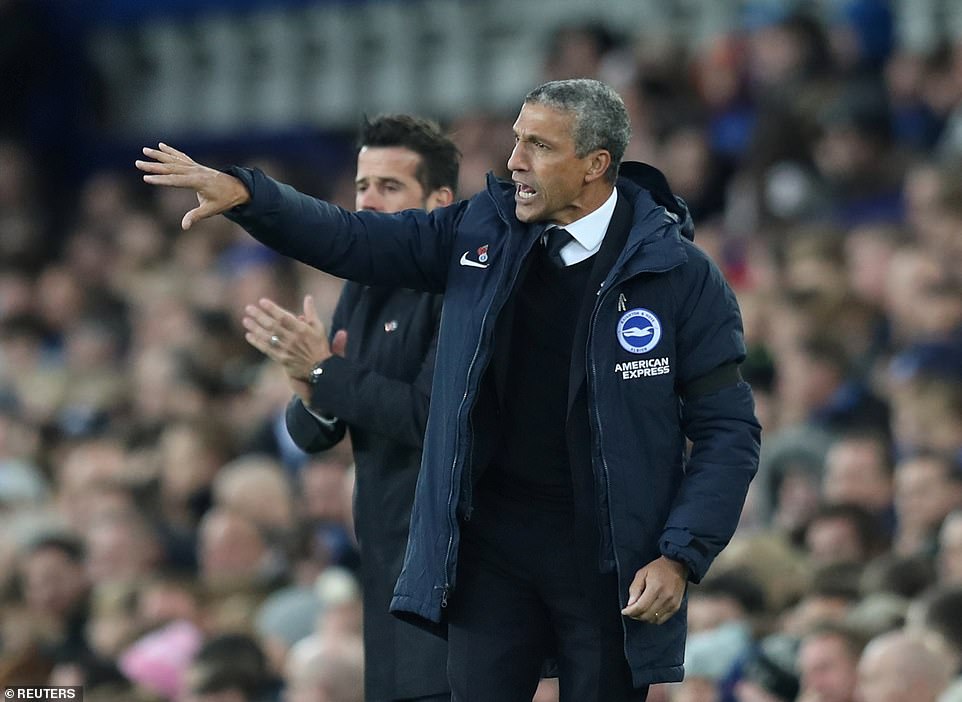 Chris Hughton, who has been nominated for October’s Manager of the Month award, remained unhappy despite Dunk’s goal 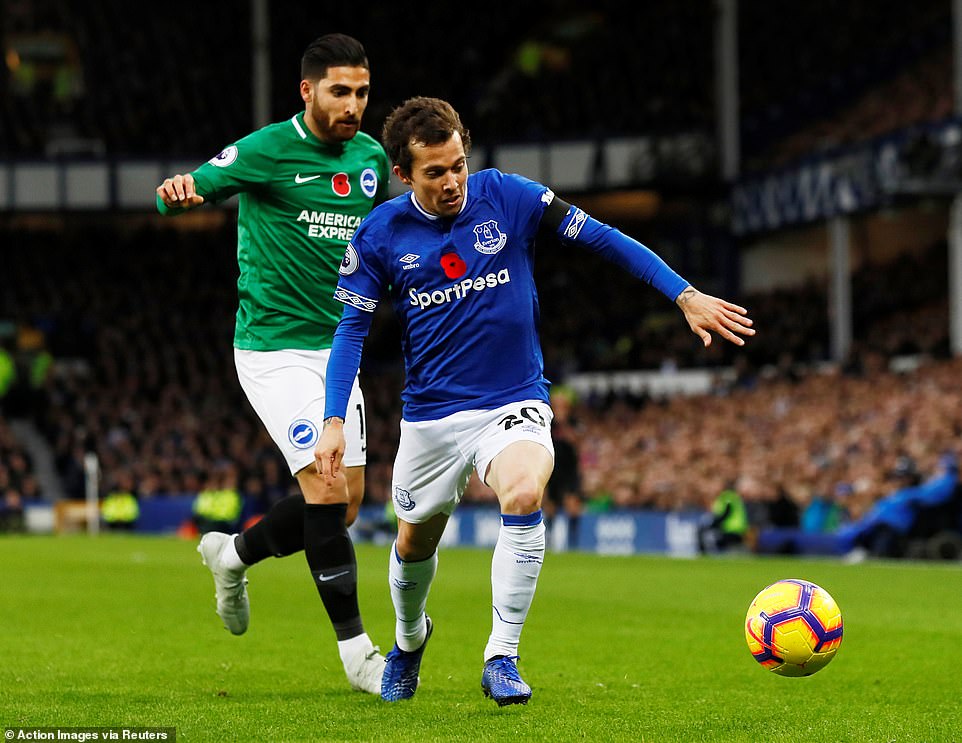 Another Brighton corner caused the problem. Everton were too slow to react as a short pass was ushered to Solly March and his hanging cross in the area enabled Dunk to outjump Kurt Zouma and plant a header past the exposed Jordan Pickford.

Conceding such avoidable goals will be the thing that holds Everton’s progress back – they have only kept two clean sheets so far – but the one aspect they have in their favour is they always look like scoring now and so it proved in the early stages of the second period.

Silva’s words during the interval must have been sharp as Everton hurtled out of the blocks; Idrissa Gueye struck the base of the post with fierce left foot shot in the 47th minute and Theo Walcott failed to get on the end of Bernard’s cutback from the follow up. 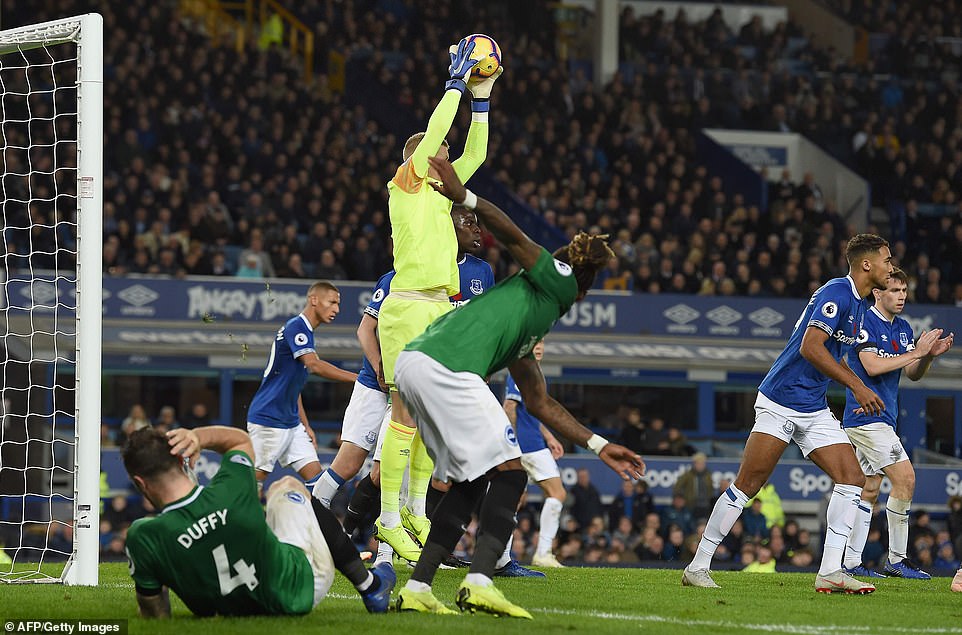 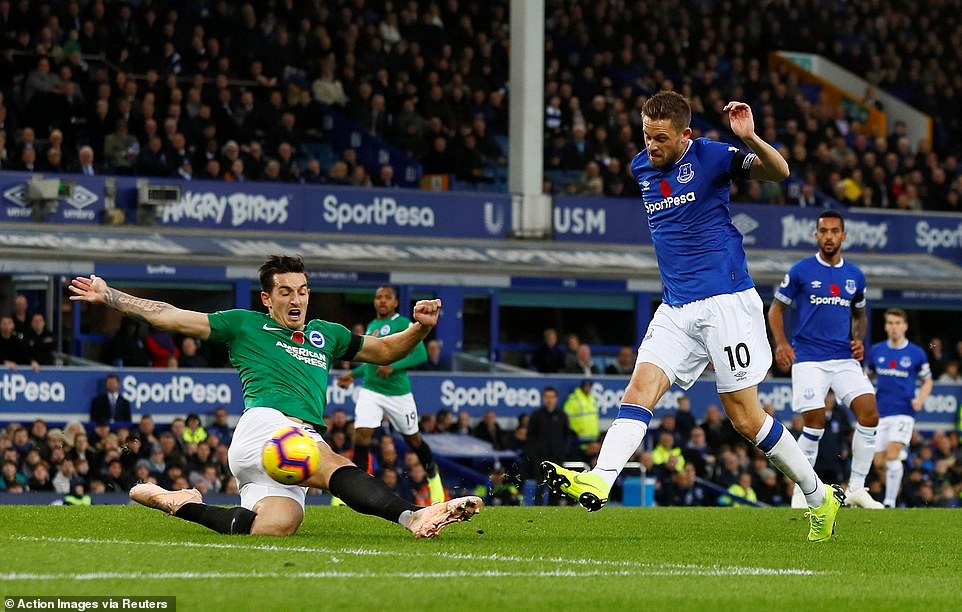 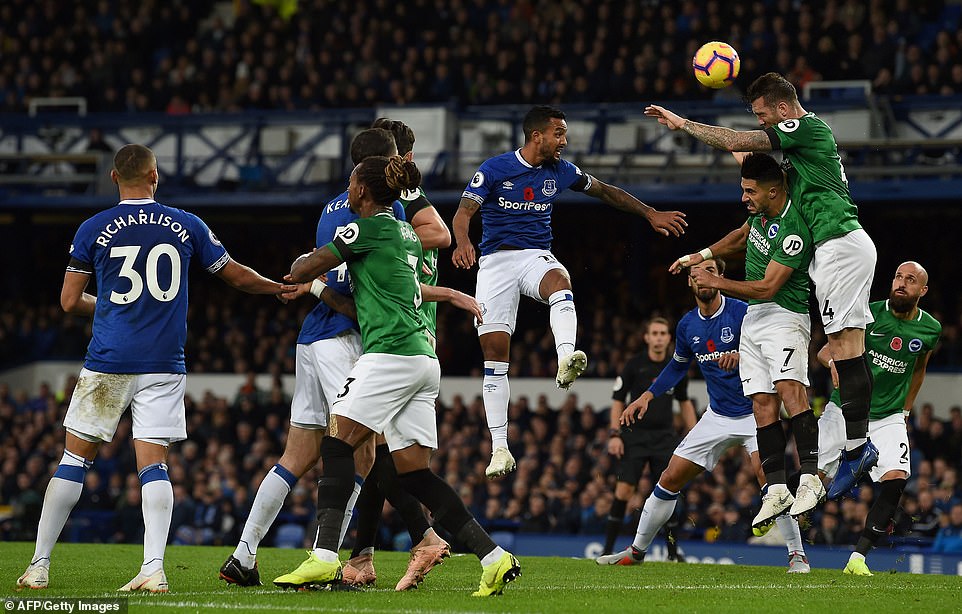 No matter; three minutes later and they had the lead once more. Coleman’s strike raced past Ryan from 25 yards but the captain will be well aware of the role Andre Gomes played, as the Portuguese’s constant harrying of Beram Kayal carved out the opening.

Coleman had come in for criticism following his performance at Manchester United last Sunday and there was a fair slice of attitude in his celebration, as raced towards the Gwladys Street stand with his hand cupped behind his ear.

However aggrieved Coleman felt, his goal broke Brighton’s resistance and they were seen off once and for all when Richarlison, with a littler assistance from the hapless Dunk, provided the grand finale. 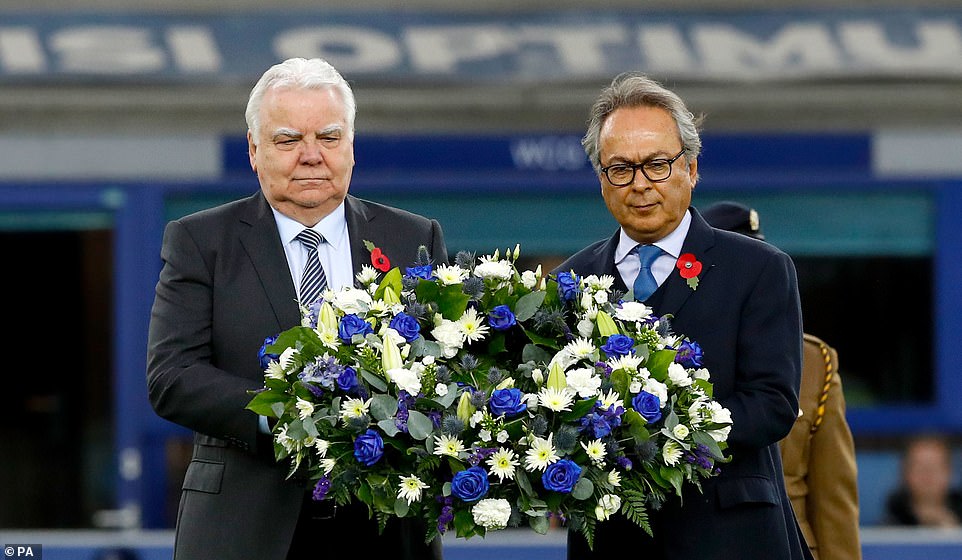 Prior to kick-off, Everton chairman Bill Kenwright (L) and owner Farhad Moshiri laid a wreath for the Leicester helicopter crash 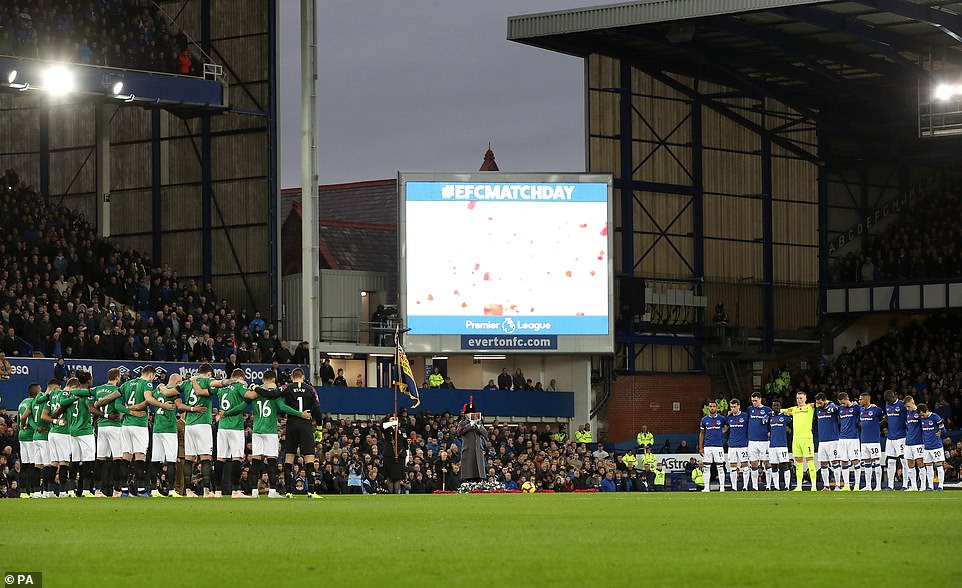