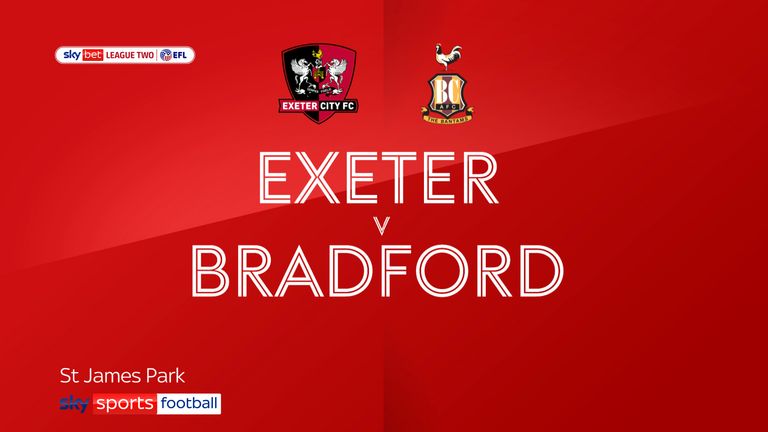 Exeter came from behind to overcome Bradford with an entertaining 3-2 win in Sky Bet League Two at St James Park.

The Grecians made a promising start to the game with Jack Sparkes seeing a header blocked on the line, but Bradford went in front after 17 minutes when they countered quickly.

Callum Cooke saw his shot blocked on the line and debutant Charles Vernam was free to tap in the rebound.

Exeter were struggling to test the Bradford goalkeeper, but they managed to draw level in the 42nd minute when Pierce Sweeney headed in at the back post from an in-swinging Sparkes corner.

Bradford went back in front just before half-time, though, when an awful mix-up in the Grecians defence saw Sparkes and goalkeeper Jokull Andresson leave the ball for each other and another Bantams debutant, Olly Crankshaw, nipped in to roll the ball into an empty net.

Bradford started the second half well with Cooke firing into the side netting, but Ryan Bowman pulled Exeter level on the hour mark with a close-range header from a pinpoint Robbie Willmott cross.

Exeter then won a penalty after 79 minutes when Bowman was taken out by goalkeeper Sam Hornby and Matt Jay rolled it down the middle to earn the Grecians the points.