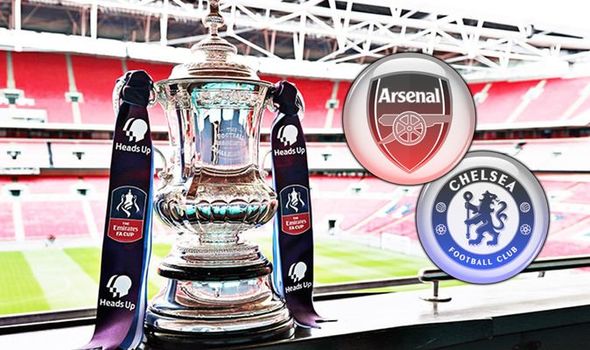 The FA Cup reaches a conclusion today as Arsenal and Chelsea clash at Wembley. But lifting the trophy is not the only thing at stake in the final.

The London rivals each picked up £1.8million for their victories in the FA Cup semi-finals.

The Gunners stunned holders Manchester City as the Blues got the better of Manchester United, with both losing clubs earning £900,000 for their efforts.

In addition to the trophy, today’s FA Cup winners will receive £3.6m in prize money.

The competition’s runners-up will be sent home with £1.8m.

ALSO SEE: What channel is Arsenal vs Chelsea on? TV, live stream for FA Cup

Normally, between the third and sixth rounds, 45 per cent of gate receipts goes to each club, with 10 per cent going into a central pot.

However, this year’s final will played behind closed doors due to the coronavirus pandemic.

Arsenal and Chelsea will also receive a broadcasting fee as the showpiece will be televised live around the world.

Speaking in 2016, Andy Clilverd, commercial director at Stadia Solutions, which specialises in the digital hoardings that run along the sides of the pitch, said: “Getting advertising access to the TV games remains very important.

“Advertisers don’t believe the magic of the cup has worn off – we have not seen a slackening off in rates.”

According to the Telegraph, prize money could be cut next season as the FA deals with the financial crisis caused by the coronavirus pandemic.

The reports claims the FA’s losses could be worth £300m.

The FA’s chief executive, Mark Bullingham, said: “The high level of uncertainty in our landscape means that we have had to plan for a whole range of potential scenarios.

“As a not-for-profit organisation, this will hit us hard.

“Therefore, over recent months, we have forensically analysed the budget of every division within The FA in order to identify the most suitable areas to make costs savings.

“And the situation has worsened to a point where we now need to reduce the size of The FA in order to deal with the financial impact of the crisis.”

How Leeds can bag transfer target for NOTHING this summer