Nearly a full year into the COVID-19 pandemic, Australians might be starting to take the presence of fans at sporting events for granted. Graham Dorrans certainly isn't.

The Western Sydney Wanderers star is finding it hard to watch football back home – not just because of the time difference but because grandstands across the English Premier League and Scottish Premiership are completely empty, and the game's natural soundtrack stripped bare. 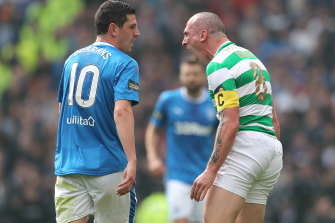 "Fans make football," he said. "It's not easy when they're not at the games."

On Saturday afternoon, when Dorrans walks out onto Stadium Australia, his friends, family and former teammates will be deeply envious.

He'll be confronted with the biggest crowd he will have seen since landing in Sydney a couple of months ago. Large sections of the public might still be tentative about mass gatherings or even taking public transport, but the early word on ticket sales suggests between 15,000 to 20,000 punters could be on hand for the derby double-header between the Wanderers and Sydney FC in the A-League and W-League.

It won't be anywhere close to the best atmosphere Dorrans has experienced – after all, the 33-year-old once captained Rangers in an Old Firm derby, although he never managed to taste victory over Celtic in three attempts. 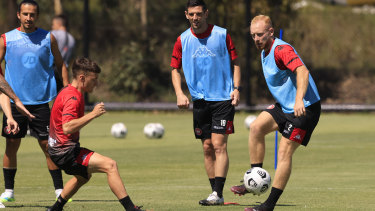 Graham Dorrans trains with the Wanderers before Christmas.Credit:Getty

Saturday will still be special, for different reasons.

"Back home, they're really struggling at the minute, a little bit more than here," Dorrans said. "I know they're having a small outbreak [in Sydney] but I don't think it's anything compared to what it's like back home. There's been another lockdown – everything closed down, all shopping centres, restaurants … families are stuck in the house which is difficult.

"I've had messages and phonecalls from my mates, they're very jealous that we can get out and about and fans can get into the games – they all follow football and have been disappointed the whole season.

"It's obviously reduced capacity but it's great to have people back at the grounds. When you're pushing for a goal in the last 10 minutes or you're defending for your life in the last 10 minutes, you want to have the fans behind you either way. It gives you an extra five, 10 per cent maybe if they're on your side."

Dorrans' new teammates have given him a hint of what to expect in the Sydney derby – "there's a bit about it, they've said" – but his own experiences should mean he is well-equipped to handle the occasion.

Last season was a tough one for the Wanderers but the derby provided them with some rare joy. They were the only team Sydney FC failed to beat, twice getting the better of the eventual champions despite being outplayed in both matches – a trend they'll be very keen to continue under new coach Carl Robinson.

Dorrans insists he'll be treating it like he would any other game, but in the past he's found that much easier said than done.

"It's hard doing it for an Old Firm derby, especially for myself," he said. "I grew up going and watching it as a fan. Playing in it was totally different. It's incredible. I captained Rangers as well, which was a huge honour for me.

"When you're walking out of the stadium you can literally not hear a thing that anyone's saying to you. Your teammates are shouting instructions and there's nothing you can hear.

"I switched my phone off for the week … you get mates and everyone calling you all week so I just switched it off and focused on football.

"It's disappointing the results never went for us, it's not been a great fixture for me. But hopefully I can get a victory in the derby at the weekend."

FA Cup on TV: Which FA Cup fourth round fixtures are live on TV this weekend?