Social media trolls have been slammed by Football Australia and the players’ union for directing “disturbing” and “abhorrent” abuse towards Matildas players – including the sharing of revealing images of two players without their consent.

Professional Footballers Australia has reported one case of image-based abuse to the eSafety Commissioner’s office, while Football Australia has also alerted Twitter and the police. 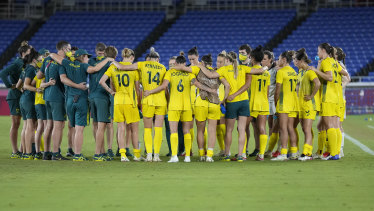 The Matildas broke their silence over Lisa De Vanna’s allegations earlier this week, prompting a backlash on social media.Credit:AP

The Herald has seen the image in question of a Matildas player, which was first posted by an anonymous account and has since been shared widely, and appears to have been accidentally sent to their public Instagram story rather than in private to another user.

A second photo of another Matildas player has purportedly been exchanged privately among several accounts. The Herald has chosen not to name either player.

“We know the impact that social media abuse can have on people,” PFA co-chief executive Beau Busch said.

“We have been in constant contact with current and former players and the impact of targeted and coordinated abuse is taking an enormous toll on them.

“These bullies and trolls lack any semblance of humanity and have sought to deliberately target current and former players with abhorrent and vile abuse through a coordinated and relentless campaign.

“This garbage has no place in society and we will continue to refer matters that are criminal in nature to the police and work with the authorities to ensure the perpetrators are held accountable.”

A spokesperson for Football Australia said: “Many people from within our football community have approached us concerned about the disturbing activities of some social media accounts that are engaging in inappropriate social media posts.

“We are closely monitoring the activities of these accounts, including for potentially defamatory comments, and have reported and will continue to report activities of concern to the relevant authorities.”

The targeted abuse comes after Matildas players broke their silence earlier this week over allegations raised by retired striker Lisa De Vanna, who told News Corp she had been bullied, sexually harassed and ostracised during her 20-year career.

The Matildas made a collective statement on Monday in which they acknowledged the “seriousness” of De Vanna’s allegations and expressed empathy for her not feeling as if she could have come forward earlier, while also defending the current environment and culture of the team as safe, inclusive and professional.

Captain Sam Kerr and 14 other players also provided individual statements supporting the group statement, many of which described the team as a “safe haven” for them.

However, it triggered a significant backlash among those who believe they did not show enough support towards De Vanna – who last played for the Matildas at the 2019 Women’s World Cup and recently retired from professional football – while others dismissed the move as an orchestrated attempt at brand protection.

Former Matilda Moya Dodd last week warned of how “old stereotypes of predatory lesbians” had been resurrected in some reporting and on social media since De Vanna’s revelations first came to light.

Sources close to the Matildas have indicated that many players have been highly distressed by the events of the past week and in particular, the targeted nature of some of the social media abuse they have received.

They are due to fly into Australia early next week for a pair of friendly matches against Brazil at Commbank Stadium in Sydney.

For many of them, it will be their first trip home since the onset of the pandemic, but they will not be able to mix with family, friends or fans because they will be subject to strict protocols approved by the NSW government that will allow them to bypass hotel quarantine.