Hargreaves is a fan of both players and says they will add to the quality “ball players” Lampard already has.

However, he still thinks the Chelsea team are a long way off matching the Blues’ Premier League title-winning teams of the past.

“I think Timo Werner’s a fabulous player and Ziyech, I love him off the right-hand side,” Hargreaves said on BT Sport.

“But still when I think back to those great Chelsea teams, I think back to [Petr] Cech in goal, John Terry, [Claude] Makelele, [Didier] Drogba, the spine. Frank doesn’t have that yet. 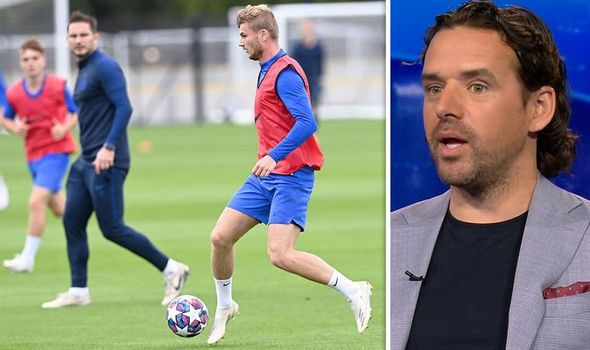 “He’s got great ball players, he has them now and he’s going to get even better ones.

“But when I think about the leaders that [Lampard] had in his teams, those [Manchester] United teams, I don’t think they are there [at Chelsea].

“So [Lampard] might spend a lot of money on these really good players but I think Frank probably wants to see somebody emerge a bit like JT [Terry] and a bit like him.

“That’s going to be difficult. I think United need that, I think Chelsea need that, Arsenal need that.”

Following the arrivals of Werner and Ziyech, Chelsea remain active in the transfer market.

And transfer expert Ian McGarry says Lampard is willing to sell a number of his first-team squad to raise funds.

McGarry said on the Transfer Window podcast: “You would have heard us speak on numerous occasions about Frank Lampard’s desire to ramp up his defence and therefore the purchases of Ziyech and of Timo Werner, and the potential arrival of Kai Havertz, do not fulfil the particular roles of augmenting the defence.

“It’s our information that Lampard is willing to sell up to four of possibly five of his current defensive players including Kurt Zouma, Andreas Christensen, Emerson and Marcos Alonso.”