Teagan Micah – Melbourne City's new No.1 goalkeeper and a player touted as the Matildas' next No.1 – is making a habit of creeping up on Australian soccer fans, but evidence suggests we probably should have stopped being surprised by her long ago.

The 23-year-old, in her latest eye-opening effort, played a blinder in her Melbourne City debut, winning player of the match with seven saves in a 0-0 draw against Brisbane Roar.

Such an outstanding performance should not have been unexpected in hindsight; Micah has been quietly dominating around the world since 2015, but for whatever reason never really got to do it in the W-League. 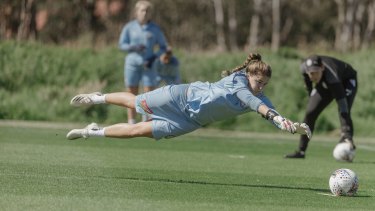 Melbourne City goalkeeper Teagan Micah could be the next Matildas No.1.

For example, Micah made Norway's Toppserien team of the year in December despite missing the final six games of the season for Arna-Bjornar through injury.

Adding to that achievement is that Micah, who is "very outgoing and not at all shy", was relatively isolated and uncomfortable in Norway because of pandemic lockdowns.

And while she struggled for W-League games from 2016 to 2019, Micah went and played 84 times for the UCLA Bruins in the US college system, finishing her career there ranked second in saves (248), third in clean sheets (36) and third in wins (62).

Her Matildas high points have also been from left field. She was first picked in a squad from relative obscurity by former coach Alen Stajcic at the 2017 Tournament of Nations in the US, replacing the injured Lydia Williams. Then she made the 2019 World Cup squad off the back of US college form, which is a rarity. Many thought there were others ahead of her for that squad, including the likes of Melbourne Victory keeper Casey Dumont who had an outstanding W-League campaign that season.

"It surprised a lot of people because I hadn't played W-League in four years," Micah said. "Maybe they were saying, 'Who's Teagan Micah?'

"I thought I'd be too out of sight, out of mind in the US. There was stigma that it would make it harder to play Matildas.

"I was like, 'Bugger it, if I don't like it I will come home.' And I went and it was the best thing and I learnt if you're good enough you get picked."

Now she's back with a psychology degree and plenty of on-field experience thanks to taking a chance in the US college system, which is an unusual place for an Australian national team aspirant to go.

"I wasn't really happy where I was in terms of loving the game when I was younger in 2015," Micah said. "Some teammates from WSW encouraged me to go over there.

"I'm glad I did. Hopefully more go to there and do it, get your degree and play." 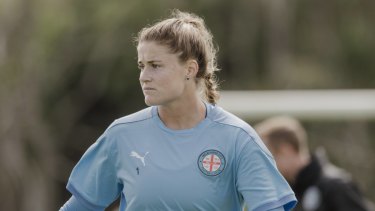 Teagan Micah encourages others to develop their game in the US college system.

Matildas insiders and her City coach Rado Vidosic think Micah could make it to the No.1 spot by the 2023 Women's World Cup in Australia and New Zealand, when current No.1 Williams will be 35.

"If she continues like this she will not only maintain her position as a Matilda but she will push for the number one spot [by 2023]," Vidosic said.

Micah dreams of such a day.

"Every day we start our 'keepers film session there's a picture of the W-League trophy and in the top corner the Olympics [logo] and the 2023 World Cup," she said.

"It's short-term goals that will get you there though. You can't always be thinking seven months [Olympics] or two years [World Cup] down the track."