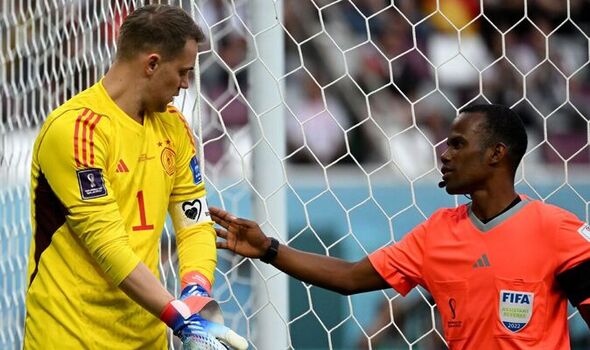 Germany captain Manuel Neuer had his armband checked by the assistant referee before the World Cup clash with Japan. Skippers from seven European nations were told they faced ‘sporting sanctions’ – including yellow cards and suspensions – if they were a pro-LGBTQ+ ‘OneLove’ armband.

Harry Kane and Gareth Bale, England and Wales captains respectively, instead wore FIFA-sanctioned armbands that included vague anti-discrimnation messaging for their opening games. Both were warned they could be yellow-carded before kick-off and potentially face a suspension for subsequent matches at the tournament.

Some rumours suggested that Germany goalkeeper Neuer would defy FIFA by wearing the ‘OneLove’ armband, which features the words alongside a rainbow-coloured heart. But the shot-stopper instead took to the field against Japan wearing a similar FIFA-sanctioned accessory to the ones worn by Kane and Bale.

Images have since shown Neuer having his armband checked by one of the assistant referees ahead of the game. The 36-year-old can be seen standing next to his goal when he is approached by the official, who seems to ask to see the armband.