‘What you see here now, this is my wife. It feels like we’ve got her back’: Middlesbrough coach Graeme Lee’s wife, Gemma, was given 12 months to live after terminal brain cancer diagnosis but one year on a trial drug has given the young family hope

Sitting here in the kitchen of their family home in Middlesbrough, Graeme Lee and his wife, Gemma, have hope.

Their children, Grayson, eight, and Hadley, five, play in nearby rooms, protected from the gravity of the conversation. Gemma, 40, has terminal brain cancer.

We journey through the past two years, from warning signs to diagnosis, treatment and near death. To now, 12 months on from the day they were told she had 12 months to live. That, then, is why there is hope. 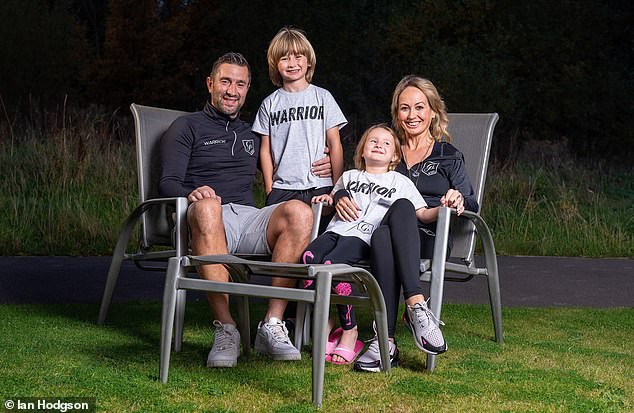 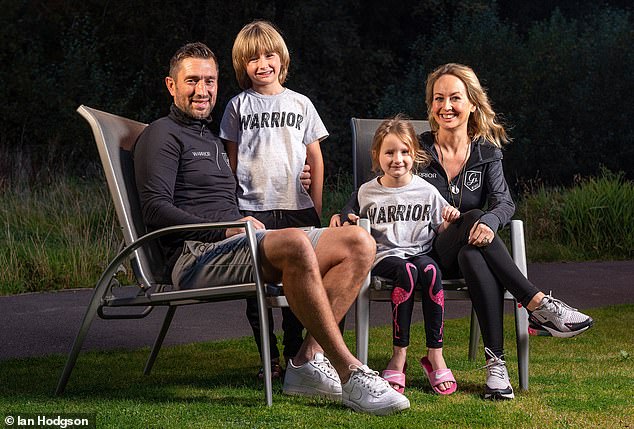 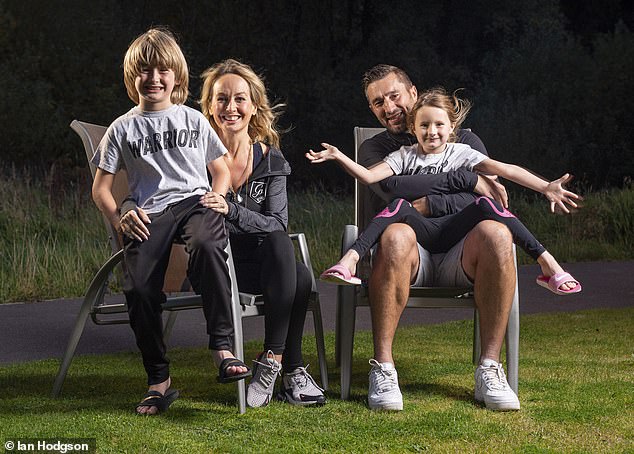 In January of this year, Graeme – Middlesbrough’s Under-23s manager after nearly 500 Football League appearances for the likes of Sheffield Wednesday, Doncaster and Hartlepool – took a flight to Germany. He was there to collect a trial drug.

Ever since, talk has been of life, not death. There is laughter, too.

‘I had one consultation then went to the chemist and stuffed my suitcase full of these drugs – I was like Pablo Escobar,’ he says.

Gemma remains terminally ill. Her brain tumour is grade four, as severe as it gets. Not that you would know, certainly not by her appearance or outlook.

And that is because the drug – ONC201, at a cost of £5,000 per month and supported in part by fundraisers at several of Graeme’s former clubs – has done something. They don’t know what, that is often the way with brain tumours. But the evidence is in Gemma herself. She is alive.

‘I’m still terminally ill, no one has told me otherwise,’ she says. ‘But after the most recent scans I’ve been classed as ‘stable’, meaning the cancer hasn’t got any worse. We’re living between scans, every three months. But, for me, stable is progress. It has pressed pause, given us more time.’

Graeme counters: ‘It has pressed play, you mean’.

Listen to what they have been through and you know exactly what he means. Life was on pause, rather, during nine months of intensive chemotherapy and radiotherapy. 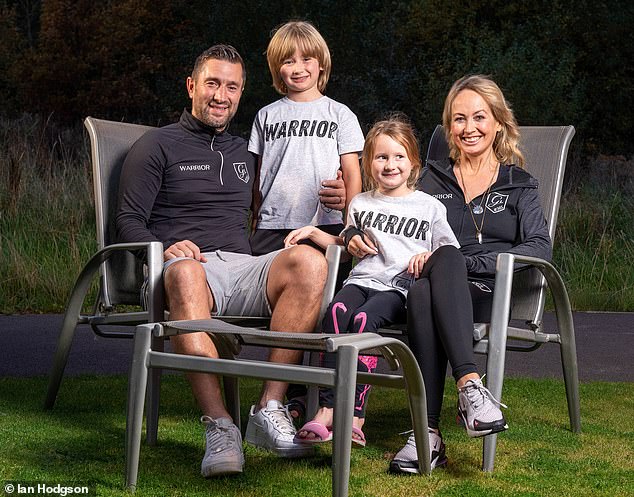 ‘I had to try that for my kids and husband, I wanted to live as long as possible. I knew I was going to die, but after a while I thought the chemo was killing me faster than the actual tumour. It wasn’t working. There was a moment when I thought, “This is it, I won’t survive this”.

‘It’s hard, everyone around you wants you to do the chemo, wants you to live. But I didn’t want the children to have a lasting memory of me being ill. I thought, “If I come off it, I can have a good few months and make some happy memories”. Then, whatever happens, it happens.

‘Going through chemo was making it agonising for everyone. In the end, my decision was easy.’

Graeme was given permanent leave by Middlesbrough. The 42-year-old spent every spare minute researching alternative treatments. There were hours of phone calls to hospitals in America.

‘I don’t think Gemma would be here now if we’d stuck to the chemo. It works for some people, of course, but it didn’t for us. We got a second opinion from a doctor in London a year ago. The first thing he said was to get off the drugs that were making her so ill. That’s all we needed, someone to tell us that was okay.

‘He’d also heard good things about the trial drug we were researching. It made our mind up – we were going for it. It felt like our only hope.’ 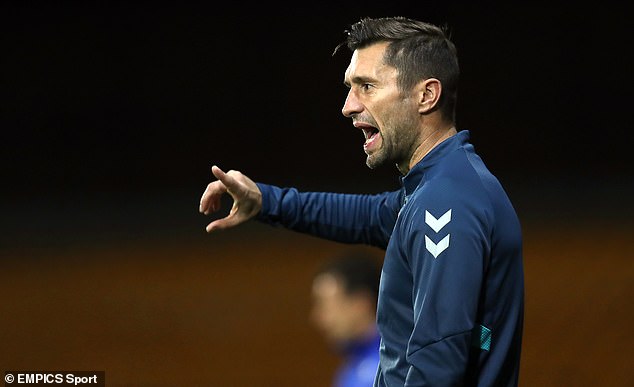 Graeme walks to the fridge and retrieves the small sleeve of tablets they call ‘life’, comfortingly housed amid the everyday surrounds of milk, cheese slices and orange juice. There is cannabis oil, too.

‘From what I’ve read, from people who have survived in the long term, you need to throw a cocktail at the cancer and you need to keep adding to it,’ says Gemma. ‘So while something is working, be that the drug or cannabis oil, I’ll keep doing it.

‘But brain cancer research and treatment needs better funding. There needs to be more noise about this. I want to push for future patients, not just myself.’

In the meantime, the family will also take strength from a drug that cannot be measured in milligrams or pence. ‘Human spirit is immeasurable,’ Gemma says. ‘No one knows what we’re truly capable of. For my children, I will try everything to think myself better. I might sound nuts, deluded, but I really believe I will survive this.

‘We’ve been told the tumour will never go away. But, you know what, it appeared out of nowhere, so it can disappear too. I’ve got to think like that, it’s the only way.’ 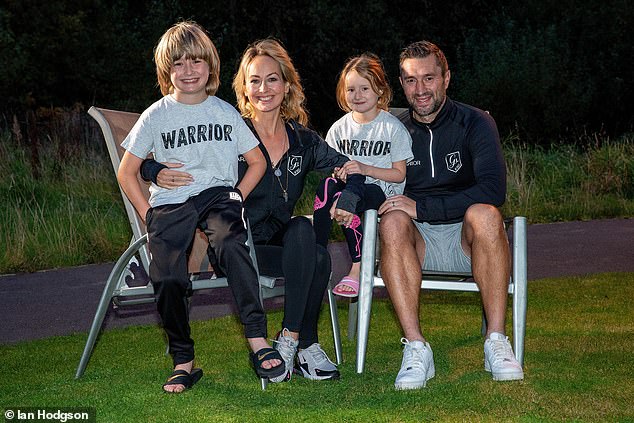 Graeme suspected his wife had a serious problem when he got a phone call at Boro’s training ground in December, 2018. It was to tell him no one had picked up their daughter from school.

He telephoned Gemma, over and over. Finally, she answered. Sleeping for 18 hours a day – and unable to explain why – not even an alarm could wake her on this afternoon.

‘I was on my knees crying when I realised,’ she says. What followed was a series of scans and consultations at the James Cook Hospital in Middlesbrough.

Graeme remembers the day in January of last year when they learned of the tumour’s severity.

‘Myself, Gemma and her mam walked into a room and there were six staff – doctors, surgeons, nurses, professors. They didn’t have to say anything, we knew. They just said they’d chuck the kitchen sink at it and see how it went.’ 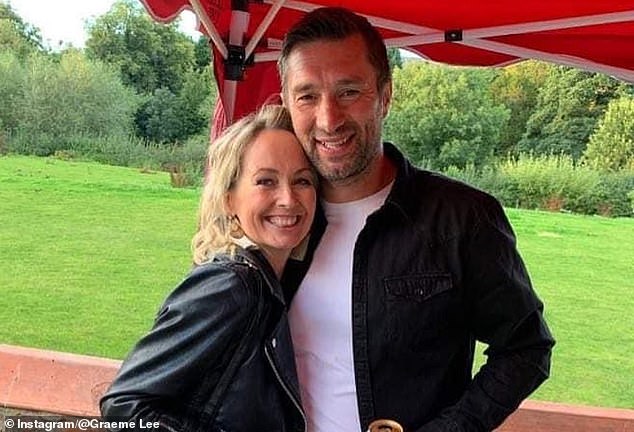 It did not go well. Just over a year ago, a Macmillan nurse arrived at the family home to arrange a visit to the local hospice.

‘It felt like I was being written off,’ says Gemma. ‘The nurse was here to talk about palliative care. I said, “I’m not going”. I knew that if I went to the hospice then it would be accepting I was going to die.

‘We spoke about doing a memory box for the kids. I was crying my eyes out, the thought of them opening it. I wanted to do it, but I knew it wasn’t time. So I wrote a blog, “Don’t Count Me Out”. In hindsight, it motivated me.’

The couple have never used the word ‘die’ in front of the children. When Hadley comes into the kitchen for first a packet of Quavers and then a drink of juice, Gemma is careful to keep our conversation upbeat. But the inescapable truth is that the thought of the children losing their mother is the couple’s worst fear.

‘We had a fundraiser and when Gemma was doing a speech, Grayson was crying in the corner,’ says Graeme. ‘That’s when it hits you. But the school have been brilliant. He’s had a play therapist and a teacher who takes him off just to throw a ball around and stuff. It has helped, we can see that.’ 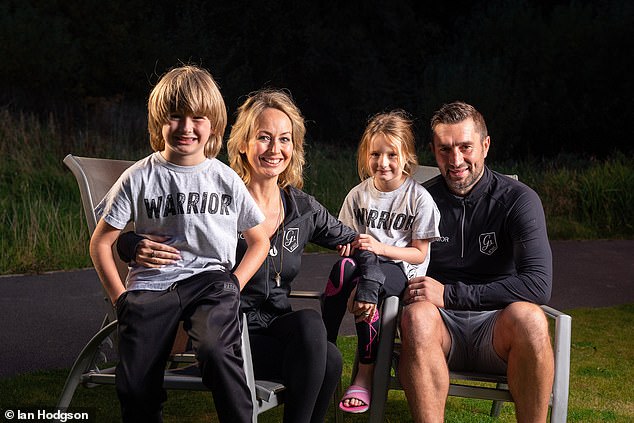 They have never used the word ‘die’ in front of the children, choosing instead to remain upbeat 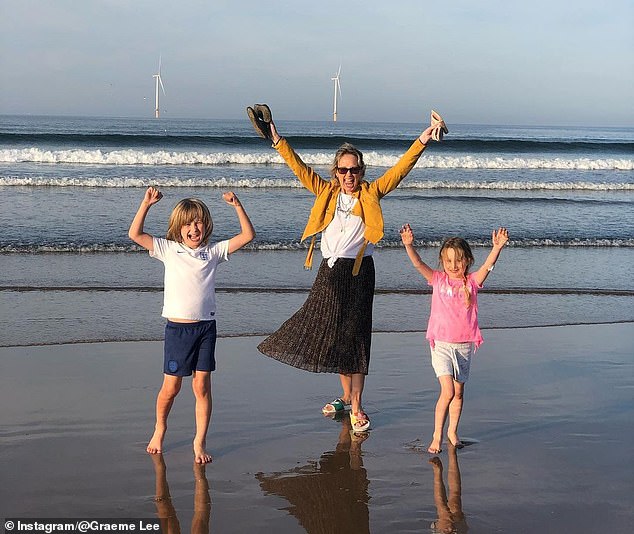 In September, the family enjoyed a lovely day on the beach as they continue to make memories

Football, too, has been a source of great comfort. On Sundays, former centre-half Graeme manages Boro Rangers and his assistant is Jonathan Woodgate. Both of their boys play in the team. ‘We should at least have an organised defence,’ he smiles.

There was also a recent trip to Doncaster’s Keepmoat Stadium, the club for whom Graeme scored the winning goal in the Football League Trophy Final of 2007 at Cardiff’s Millennium Stadium.

His former team-mate and Doncaster legend James Coppinger had the idea of £10 from every home shirt sold being donated towards Gemma’s treatment, and the club agreed.

‘I was lost for words,’ says Graeme. ‘We’ve been so lucky with the support we’ve had. From day one someone set up a GoFundMe page. You don’t know why at the time, but it’s life-saving now. 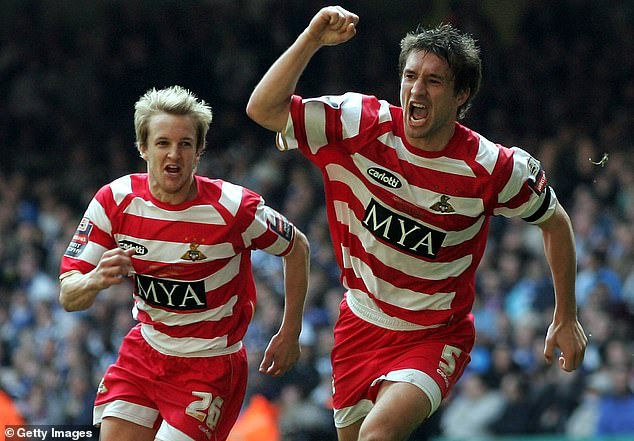 ‘It’s not just the funds, it’s every text message, phone call, it makes you stronger. Because there are times when you really need that.

‘I remember going to a funeral and I was stood there thinking, “I could not do this”. I’d look at Gemma during the treatment, she was so ill, and I’d think, “What do I do with the kids, just me?”.

‘Some days I’d ring the academy manager and just couldn’t get my words out. But the club have been fantastic in that respect.

‘I’ve had other moments with the girls in the academy office, when I’ve had to stop myself from speaking, especially when the news was so bad. I was there one day looking at a picture of Gemma, and just said, “That’s not my wife. She’s not there”.

‘So this, what you see here now, this is my wife. It feels like we’ve got her back.’ 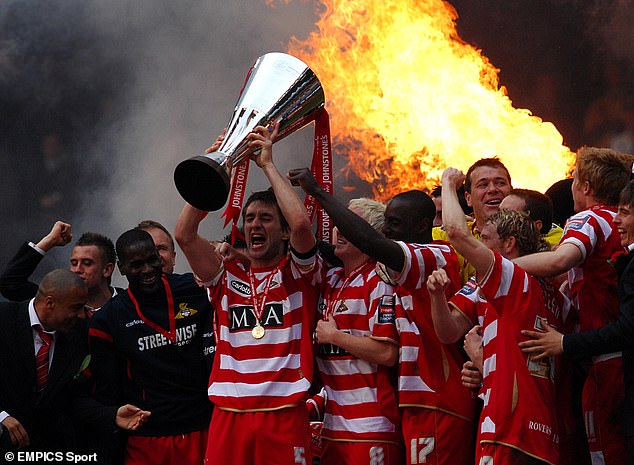 The couple met 22 years ago at Middlesbrough’s Millennium nightclub.

‘He was a young footballer and a bit full of himself,’ says Gemma. ‘At a student night. He should have been at home in bed.’

‘I was injured,’ protests Graeme.

They laugh at some of the subsequent memories, such as Graeme’s time at Notts County, where Sven-Goran Eriksson was director of football. 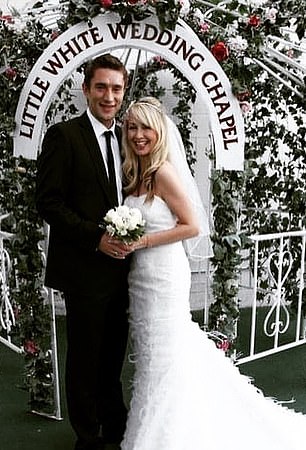 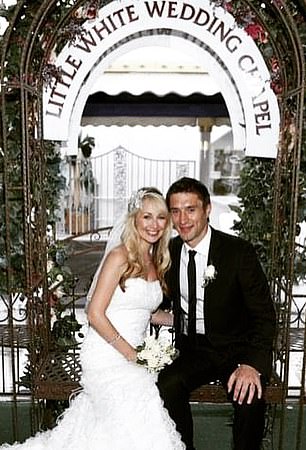 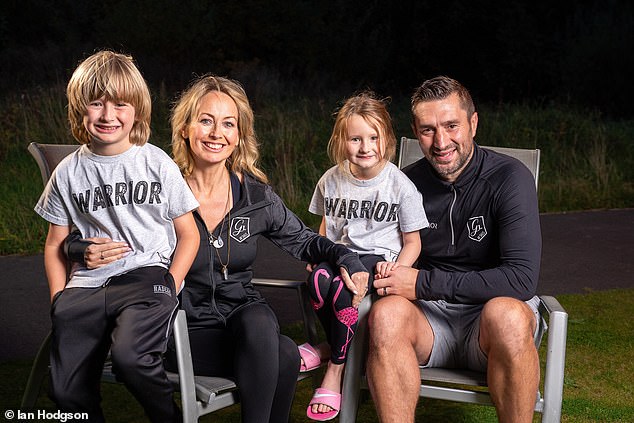 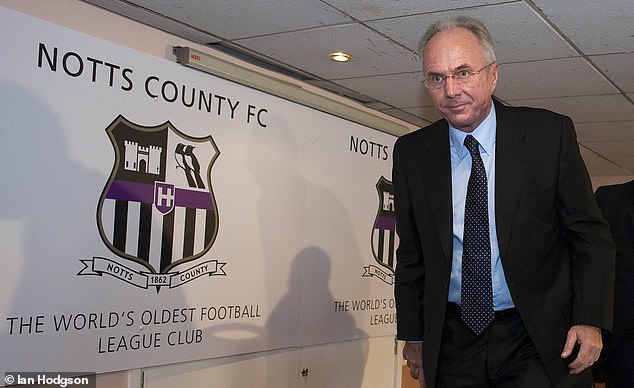 He says: ‘We’d always joke about Sven. “How does he get women?”. He then walked past all the wives after one game and said, “Hello, ladies”. That was it, they were giggling like schoolgirls!

‘But he was a good man. We won the league. It was exciting times.’

Gemma remembers: ‘There was talk of an Arab takeover. They put free food and drinks in the players’ lounge. The next week we were told the Arabs didn’t exist. It was like, “Get your own drinks, there’s water in the tap!”.

‘But I was there every week, supporting him, putting up with his moods. So he certainly owes me lots of care and attention.’ 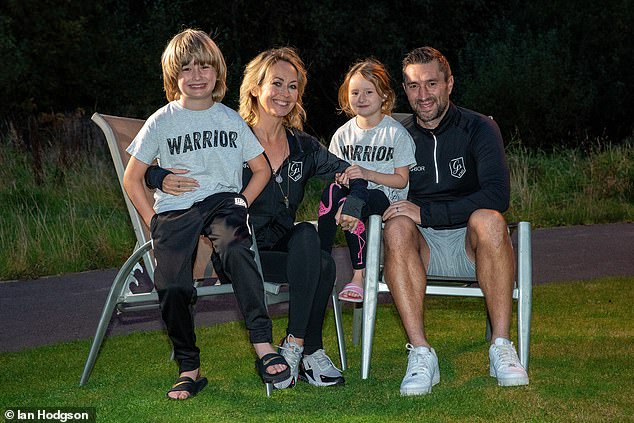 As well as Gemma helping to raise awareness by writing her 365 blog (in recognition of how many days she was given to live), the family are raising funds through a JustGiving page and through their own Warrior Wear clothing brand. The links to all three are below…

Silva insists he hasn't joined Chelsea to 'dine out in London'