Report as Ross Callachan stops Rangers moving five wins from the title with last kick of the game to earn Hamilton valuable point in fight against relegation; Brian Easton puts through own net for opening goal; Allan McGregor in top form to deny hosts before last-gasp leveller 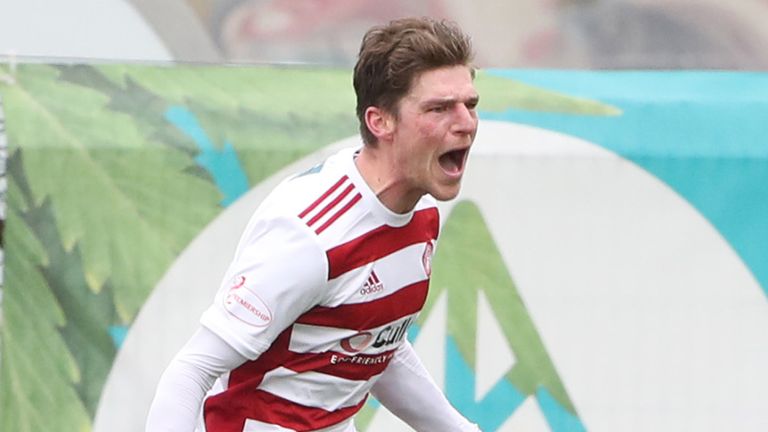 Ross Callachan broke Rangers’ resistance with the last kick of the game to earn basement side Hamilton a shock 1-1 draw against the runaway league leaders.

Callachan finally found a way past an in-form Allan McGregor in the final seconds of four minutes of injury time to give the Accies a point they richly deserved, having earlier gone close through the goalscorer, as well as Bruce Anderson and Scott McCann.

Rangers had stuttered after making three changes from their midweek win over St Johnstone, and the introduction of Steven Davis late on looked to have paid dividends immediately with his role in the opening goal.

His threaded through-ball down the left was turned into the six-yard box by Borna Barisic, where Ryan Fulton’s touch deflected it into Brian Easton, who could do nothing but put through his own net to give Rangers the lead.

But Hamilton, four points adrift at the bottom and beaten on home soil by Ross County in the week, did not give up and earned a valuable point in the fight against relegation when Callachan fired in from a close angle on the rebound after McGregor had kept out Anderson’s header.

Celtic’s victory over Motherwell on Saturday meant only three points at the Fountain of Youth Stadium would take Rangers five wins from the title, but they rarely got going in a stop-start first half at the Scottish Premiership’s bottom side.

Instead, Brian Rice oversaw a comfortable watch in his first game since celebrating his two-year anniversary in charge last week, with Easton going the closest of either side before the break when robbing Filip Helander before pulling a strong stop out of McGregor from a tight angle.

It would not be the goalkeeper’s last. While Fulton remained a relative passenger at the other end, only pausing to watch Joe Aribo’s effort arrow just wide, the veteran stopper was at his best to keep out McMann’s driven effort before recomposing himself to deny Callachan on the follow-up. 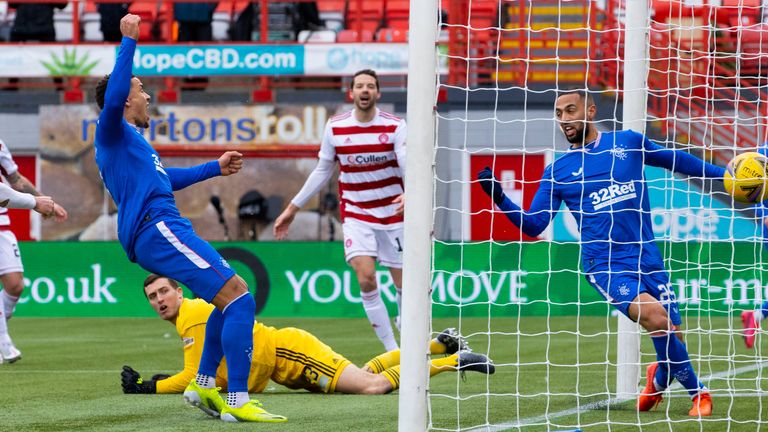 Anderson then pulled another save out of the 39-year-old’s legs, before Rangers finally stuttered into life as their substitutes, rested from their midweek win over St Johnstone, got things clicking.

First Ryan Jack fed Ryan Kent into the box, where he shook off two challenges before firing wide, then after Callachan had been denied with another strong save from a free-kick, then fellow arrival Davis’ through-ball played a major part in the opener.

Easton was left frustrated but blameless when Barisic’s cross was turned into his body and ricocheted into the net, but he did not hold onto his anger for long, with one final sting in the tail still to follow.

Rangers looked to have clawed their way to the kind of victory which champions are made of when substitute Ronan Hughes found space on the left, delivered for Anderson to head goalwards, and from the rebound Callachan’s shot deflected in under McGregor’s body with the final kick of the game.

Five wins and a draw would now do for Rangers, but that could all change with the final game before the split an Old Firm meeting on March 21.

Hamilton travel to Livingston in midweek, visiting the Tony Macaroni Stadium on Wednesday; Kick-off at 6pm.

Rangers are not back in action until next Saturday, when they host Kilmarnock; Kick-off at 3pm.

Liverpool have worked hard to get over title agony, says Alisson