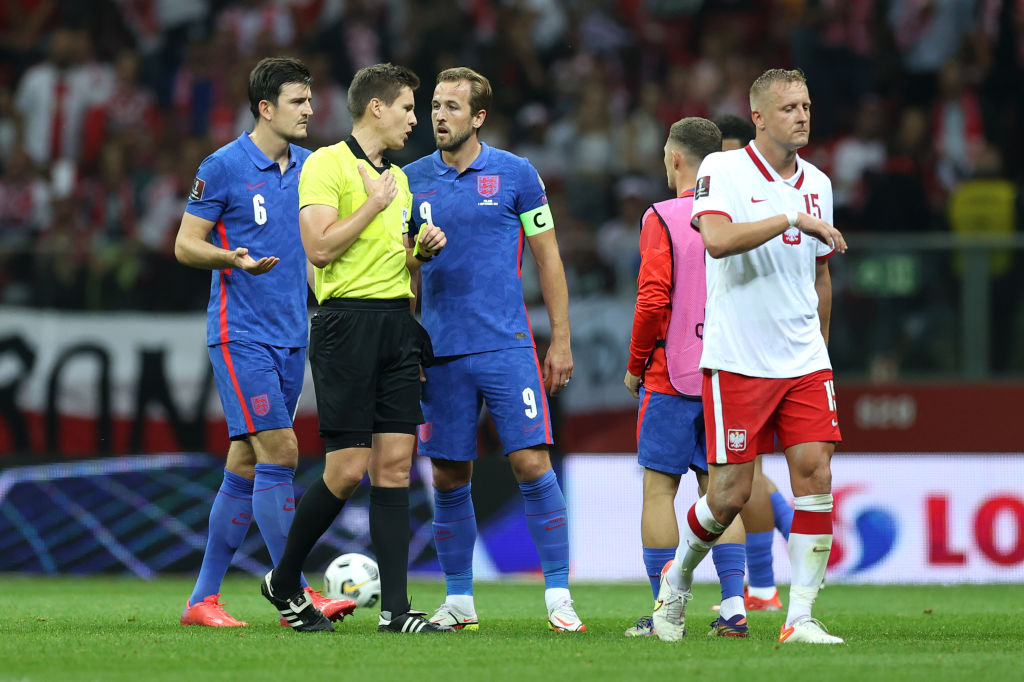 Harry Kane says that the incident just before the half time break during England’s draw in Poland has been reported to the FA and an investigation has been launched.

Kane scored a super opener for the Three Lions in Warsaw on 72 minutes, seemingly giving his side the victory until Damian Szymanski headed in an equaliser in injury time.

It was an extremely feisty game in Poland, with tackles flying in and plenty of physicality mainly on display from the home team, with five Polish players show a yellow card.

There was a significant flashpoint right on the half time whistle which saw Manchester United defender Harry Maguire enraged with Poland centre-back Kamil Glik.

It wasn’t clear what happened at first, with both men shown a yellow card by referee Daniel Siebert, but replays showed Glik seemed to pinch the neck of England and Manchester City full-back Kyle Walker right in front of Siebert.

Whether or not it was this exact incident that has sparked an investigation is not clear, but Kane has confirmed the FA have been informed of something and are looking into it.

‘There was an incident just before half-time which has been reported to the FA guys,’ the England captain told the BBC. ‘They’re taking care of it and investigating it and we’ll go from there.

‘Allegedly it was something that was done, not said. We haven’t chance to look at the footage and talk to the lad.’

Gareth Southgate added: ‘We’re getting to grips with what that was. There’s been a report put in and we need to find out a little bit more about what’s happened.

‘At the moment we’re still gathering all the evidence so there’s no point in me speculating any further.’

England remain top of World Cup qualification Group I but lose their perfect record having won their previous five games, which Kane says hurts, especially given the late goal.

‘A tough one to take right at the end,’ he said. ‘I thought we handled the game well, not an easy place to come and we were seeing the game out well. Sometimes the pressure comes away from home but we are top with four games to go.

‘Rebounds and second balls fell their way and the guy headed it in. That is football. Two tough away games in this camp but four points clear and we are in a good position.’

Sky Bet Championship Goal of the Month vote for June