REVEALED: Burnley’s goals tally has nearly doubled under Mike Jackson, Leeds have cleaned up their defence while Everton are digging in for points… how the Premier League strugglers have abandoned previous styles in a bid to beat relegation

It’s proving to be one of the most competitive battles against relegation for years in the Premier League and it’s set to go down to the wire.

While the weekend saw the likes of Norwich City and Watford seal a return to the Championship less than a year after promotion, the battle to avoid becoming the third and final team to join them in the second tier is heating up at the end of the season.

For a long time it looked like being a straight dog fight between Burnley and Everton. However, their relative form compared to their position in the table has been impressive enough in recent weeks to even drag Leeds United into the fight. 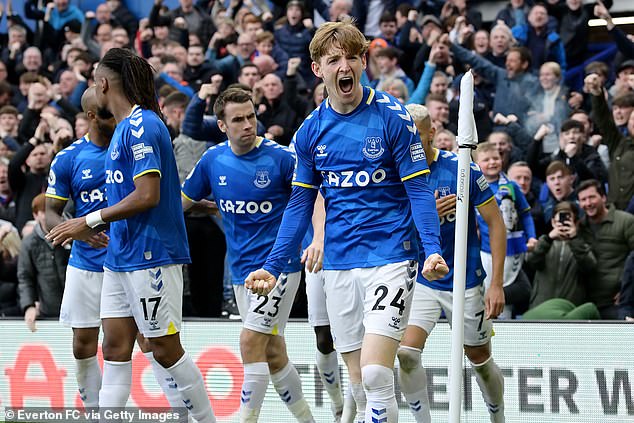 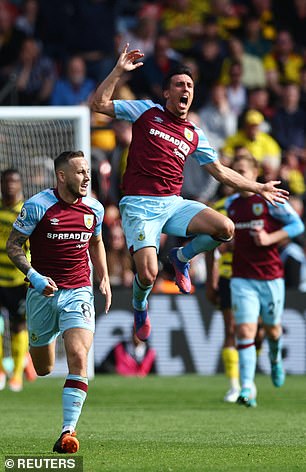 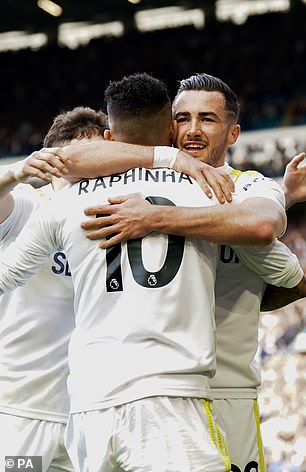 Leeds themselves have also seen an upturn in fortunes during this time, but a heavy weekend defeat at home by Manchester City has seen their table rivals home in on them with Burnley winning 2-1 at Watford and Everton overcoming Chelsea 1-0.

Right now, it’s Burnley and Leeds sitting pretty with 34 points from as many games with four to play, while Everton sit in the relegation zone two points back but with a crucial game in hand. Effectively they are now all averaging around a point per game for the season.

That’s not always been the case, and all three have improved in some form having sacked their managers earlier in the season.

Burnley were the last of the bottom five to dispense with their boss who led them into the campaign when Sean Dyche’s decade long reign was brought to an end after a 2-0 defeat at Norwich last month.

That of course was only four games ago but Burnley had also only managed 24 points from 30 games at that point.

Leeds, meanwhile, pulled the plug on Marcelo Bielsa’s tenure when the Argentine’s defence started showing more holes than a sieve. A 4-0 home defeat by Tottenham at the end of February saw them with only 23 points from 26 games.

Everton curiously are slightly worse off points wise per game under Frank Lampard than they were with Rafa Benitez, who was sacked with 19 points from as many matches after a 2-1 loss against Norwich in mid January.

However, Everton’s tally under Benitez is boosted by having won four of their first six games of the season before form spiralled out of control under the former Liverpool boss.

With that in mind it would be incredibly unfair to suggest Frank Lampard has not in some way improved the Toffees since his arrival. 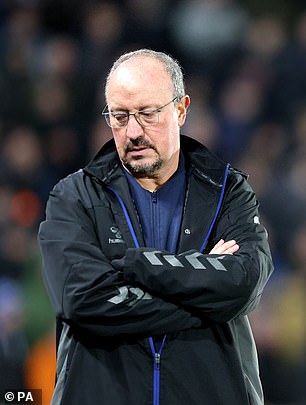 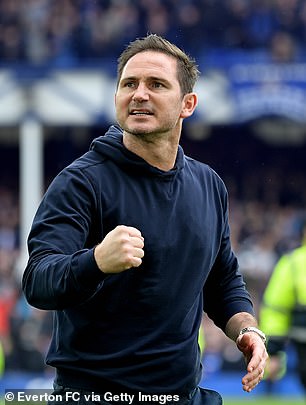 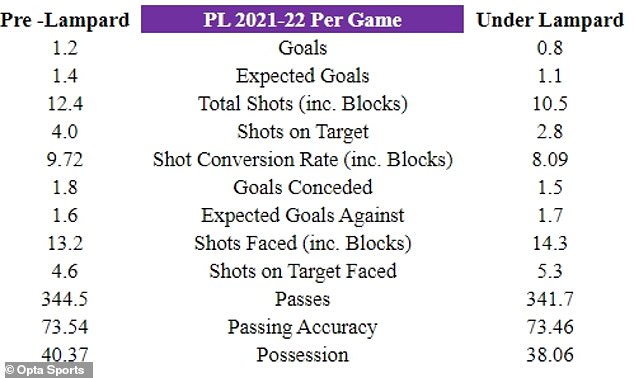 It’s an old cliche but teams usually start to arrest poor form by stopping defeats and the former Chelsea boss appears to be addressing that issue as best as he can with the tools available to him.

Everton have dug in. Effectively they have put the handbrake on now with goals, shots on target and shots in total all dropping under Lampard.

But while the defensive approach has not prevented shots being fired at Jordan Pickford, it has seen a drop in goals conceded from 1.8 goals per game to 1.5.

No where was this more apparent than the recent 2-0 defeat at Liverpool, but for long periods the gameplan was working as they frustrated their Merseyside rivals at Anfield before Jurgen Klopp’s outfit eventually made their second half breakthrough.

Chelsea too were met with a blue wall at the weekend, with Richarlison ensuring at the other end he took a critical chance when presented with one to snatch a vital victory.

Leeds have also looked to plug those gaps at the back under Jesse Marsch following the man-to-man approach under predecessor Bielsa that had been cracked by opposing sides with embarrassing ease. 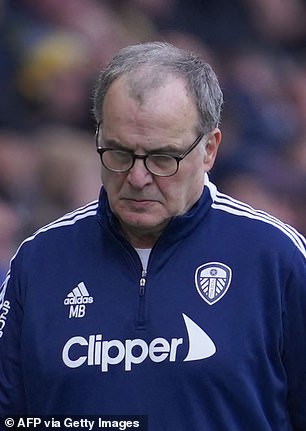 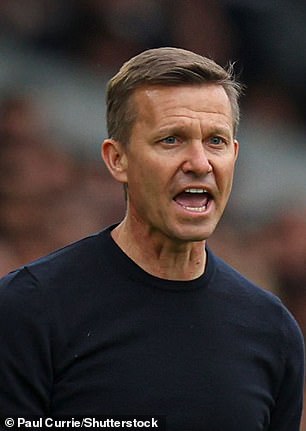 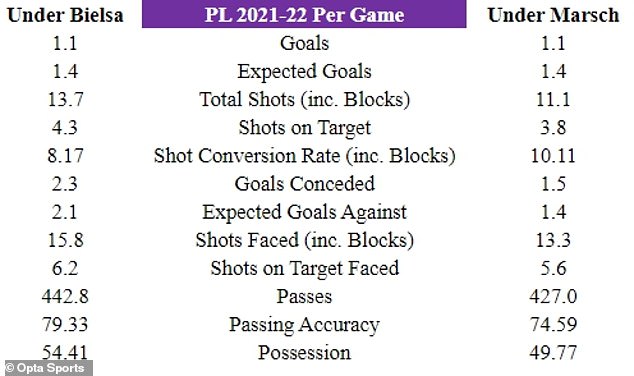 Granted Leeds were hammered 4-0 at home by Manchester City at the weekend – but Pep Guardiola’s side are able to do that against anyone in Europe.

In fact the defeat was an improvement on their previous result against City having lost 7-0 at the Etihad Stadium back in December.

Since then they have been beaten 4-1 at home by Arsenal, 4-2 by bitter rivals Manchester United, before following that up with a 6-0 capitulation at Liverpool and the final humiliation by Spurs to mark the end of Bielsa’s time at Elland Road.

Jesse Marsch has at least for the most part tidied up the defence. Goals conceded per game has dropped from 2.3 to 1.5, with expected goals against also dropping from 2.1 to 1.4 – indicating that the quality of chances being offered up to opponents has significantly tumbled.

Crucially for Leeds, it’s come at no sacrifice at the other end, with the club still scoring and creating the same amount of quality chances per game. Before the City defeat they had taken 10 points from just five games too.

Burnley though have taken an opposite approach. While they could prove tough to break down, losing close games does nothing for the points column and a lack of goals looked to be a key factor to their slide towards the second tier. Even now despite their revival, their tally of 31 is the second worst in the league after rock bottom Norwich. 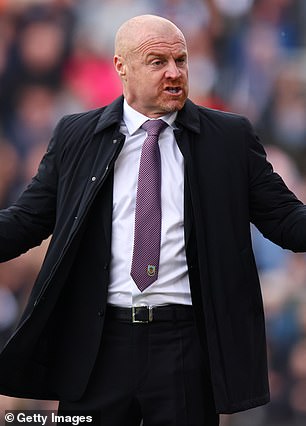 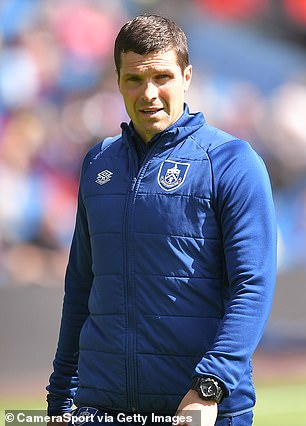 Despite the unpopular sacking of Sean Dyche, form has greatly improved under Mike Jackson 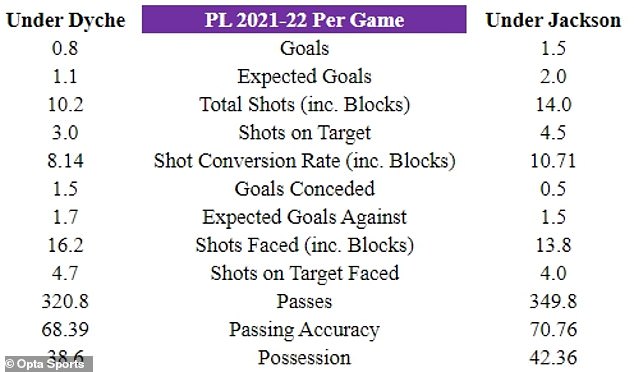 That’s also despite the fact that they have been let off the leash under caretaker boss Mike Jackson, who has now taken 10 points from his four games in charge.

New manager bounce or not, that is a huge improvement and stats show how goals and expected goals have nearly doubled to 1.5 and 2.0 respectively per game in his short time in charge.

Everything attacking wise is up too from total shots, shots on target and even the shot conversion rate, with possession also rising nearly four points to 42 per cent.

Intriguingly enough the defence has improved significantly too. Goals conceded has dropped by a third per game to just 0.5. Attack may very well be the best form of defence.

Despite their improvements under new managers it sill looks like being one member of the three dropping down into the Championship.

But such is their recent improvement in form maybe even some of the teams on what is generally considered the ‘safe mark’ of 40 points above them – including Aston Villa, Brentford and Southampton – may still have one eye over their shoulder.