Eddie Howe says Newcastle’s growing injury list will dictate his transfer policy throughout January, despite admitting FFP rules will play a big role in how much the mega-rich Magpies can spend this month

Eddie Howe has warned that Newcastle’s squad is not deep enough to compete on three fronts in its current state this season.

Ahead of Saturday’s trip to Sheffield Wednesday in the third round of the FA Cup, the Magpies are third in the Premier League and entertain Leicester City in the Carabao Cup quarter-final on Tuesday.

Howe has been boosted by the return to training of Alexander Isak, the £60million striker who has been missing since October with a torn thigh muscle. 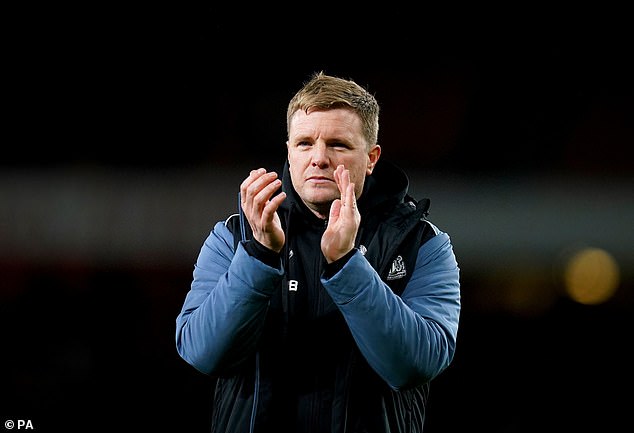 But injuries to defender Matt Targett and midfielder Jonjo Shelvey – both sidelined until February – have left them light in key areas.

Howe says that Financial Fair Play continues to be an issue given a spend in excess of £200million last year.

However, when asked if his squad was strong enough to compete in all three competitions, Howe said: ‘We have spent money in the previous two windows and FFP is impacting what we can do. FFP and our need to improve, they are two different things.

‘Without any injuries, yes (our squad is strong enough). With injuries, probably not. So, we have two injuries at the moment, to Jonjo and Matt Targett, which are a huge blow for us, to take two quality players out of a squad that is not hugely deep in terms of numbers. 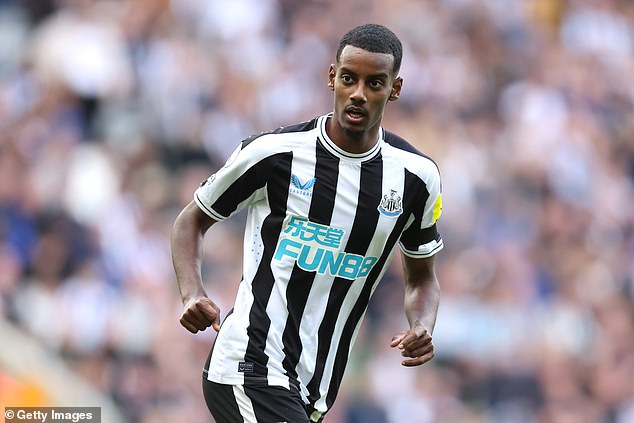 ‘That is why the transfer talk is interesting from our perspective, because it will be injury related. With a full group, I think we are strong enough and have quality in every position, but you lose a few players and suddenly that changes.

‘It will be the injury list that dictates what we do transfer wise, not so much the games. And we are very keen to progress, we want the extra games..’

Isak could return to the bench at Hillsborough this weekend, as Howe said: ‘I’m not clear yet because I don’t want to put pressure on him. We’ll introduce him at the right time.

‘He’s getting closer all the time and he has trained with the team. I’m pleased with his progress. Let’s wait and see.

‘If and when we do get Alex back, it’ll be a huge lift. It’s a cliche, but he’ll be like a new signing for us. He’s a massive player with huge ability, so we’re very keen to get him back on the pitch.’