The day after the Socceroos qualified for the 2006 World Cup, beating Uruguay at the Olympic Stadium in a penalty shootout, the late Age and Herald football writer Michael Cockerill started his summation thus: “It’s a lot more fun witnessing history than reliving it”.

But can we relive some of it, Cockers? Just a bit? For here, in the W Brisbane hotel, all these years later, former Socceroos coach Guus Hiddink sits across the table and he’s in fine form.

Dressed in a dark blue Socceroos tracksuit, he is part of Graham Arnold’s staff for two friendlies against New Zealand. Australia won the first 1-0 at Brisbane’s Suncorp Stadium on Thursday night and play the second at Auckland’s Eden Park on Sunday.

It is an interesting power shift: Arnold was Hiddink’s assistant during that fabled 2006 campaign but even now – like everyone – Arnold still calls the 75-year-old “Boss”.

“I’m not the boss,” Hiddink smiles, before pointing at Arnold. “He’s the boss.”

All history is retold differently with each year that passes, but the story I want Hiddink to confirm is one told to me by Arnold months ago. 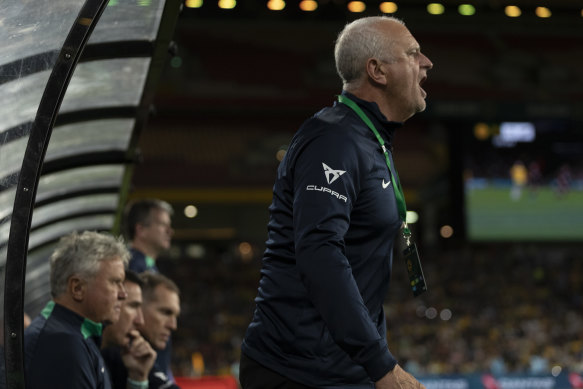 The old firm … Guus Hiddink and Graham Arnold on the sideline on Thursday nightCredit:Aleksander Jason

As Australia prepared for their World Cup qualifying matches against Uruguay, Hiddink was stunned when Arnold told him Football Federation Australia (now known as Football Australia) wasn’t going to stump up for a charter flight from Montevideo to Sydney after the first leg – especially when the team’s major sponsor was Qantas.

“Qantas?” Hiddink said from Holland, where he was coaching PSV Eindhoven. “Aren’t they an airplane company?”

“Tell them to call me tomorrow at 5pm,” Hiddink said. “You be in the office. Because I’m resigning. You watch.”

Hiddink chuckled then hung up.

The next day, according to Arnold, he sat in an office with FFA’s then chief executive John O’Neill, national teams boss John Boultbee and media manager Stuart Hodge.

“I had a conversation with Arnie and we don’t have a charter flight,” Hiddink said. “That’s good … Stuart, I want you to send me my resignation press release. Have a great day.”

Hiddink then hung up.

Arnold was walking through Hyde Park near the FFA offices soon after when Hiddink called.

“How were their faces?” Hiddink asked.

O’Neill disputed this version of events when contacted, saying it was his and FFA chairman Frank Lowy’s idea to charter the flight from Uruguay.

“Success has many fathers,” O’Neill says. “But if Guus and Arnie want to join the queue, they are more than welcome.”

Yet Hiddink confirmed the anecdote. So did Arnold. I asked them twice for verification, although Hiddink said he never intended to resign.

“I’d read the report from the previous qualification when they were kicked out [in 2001],” he recalls, referring to the Socceroos’ shabby treatment against the same opponent in Montevideo four years earlier. “I said, ‘Come on. You were molested. You were harassed. As a federation, you have to provide the best’.

“We had to fight so we could fly easily and come back easily, so we can be refreshed again at the home game. It’s expensive. But if you don’t qualify, it’s even more expensive. They [FFA] went along with it, eventually.”

Regardless of what went down, the interaction shows Hiddink’s minute attention to detail in preparing his teams.

Not only did he get his charter flight, which included massage tables and ice baths, he also asked team manager Gary Moretti to book every business class seat on the only commercial flight to Sydney.

The Uruguay team arrived in Sydney, a day later than the Socceroos, having sat in economy, transiting through Santiago and Auckland.

“He’s a genius,” Arnold says simply of his mentor.

Hiddink effectively sat in silence in the dugout for most of the match on Thursday night. As Arnold stalked the coach’s box, bellowing at his players, the Dutchman merely stroked his chin as he ran a discerning eye over what was being played out before him.

But some things never change, especially for a man who has coached a constellation of stars; whether it’s for Real Madrid, Chelsea or the national teams of Russia, South Korea, his homeland of the Netherlands or his adopted homeland of Australia.

When the Socceroos didn’t receive a penalty late in the first half after an awkward challenge, Hiddink let the poor old fourth referee standing between the two dugouts know.

“Heeeeeeey!” Hiddink erupted. “Come on, referee! Help us! Help us!”

After the match, as the players walked around the fence signing autographs and posing for selfies, Arnold tried to drag Hiddink along.

But he was reluctant, even embarrassed, and the younger generation of fans didn’t notice him as they jockeyed for position on the fence. 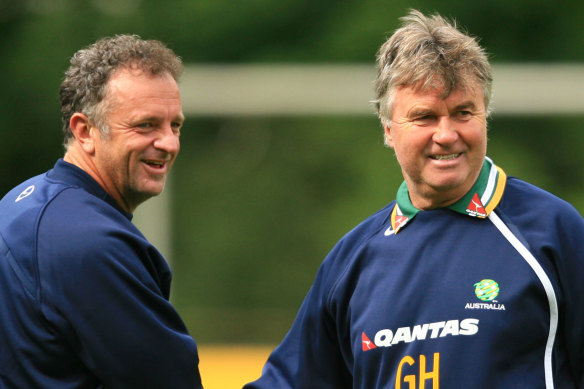 Apprentice and master … Arnold with Hiddink during the World Cup in 2006Credit:Vince Caligiuri

Then, as Hiddink walked towards the tunnel, more people noticed him and soon enough a familiar chant echoed across the stadium: “Guuuuuuuuuuuuuuus!”

“What I like about Australia is that you can be very frank and say what you think,” Hiddink says. “I worked with various cultures and every culture is different. I like them all. From China to Korea to Russia to Spain to England. In Australia, you can be very direct. You don’t have to be over-careful. Australians won’t be offended.”

Which brings us to the Socceroos’ first training camp under Hiddink in Holland in 2005.

“We had a 6pm meeting and dinner,” he says. “The players were dressed in Bermuda shorts, in flip-flops, in T-shirts, with caps on sideways. I turned to Arnie and said, ‘What bunch of lumberjacks is this?!’”

Hiddink roars with laughter as he retells the story.

“Then they start eating,” he continues. “I like to observe the first meeting of the team, how things are. I cherish the good things, and I change the other things. I was sitting there. What a bunch of lumberjacks … I liked it. I liked it very much.”

After Australia bowed out of the World Cup following a controversial 1-0 loss to Italy in the round of 16, Hiddink fronted the team’s farewell dinner wearing thongs and board shorts.

“Just to finish off this whole era,” he smiles.

Arnold carries many lessons from his time under Hiddink into November’s World Cup campaign in Qatar. He started learning from their very first meeting, when Arnold was given the job of selling the role to the legendary coach. 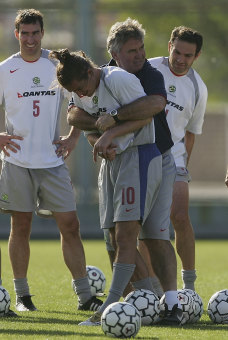 Hiddink with Harry Kewell in Montevideo in 2005.Credit:Getty Images

“When I first met him, it was like, I couldn’t believe that he was going to coach Australia,” Arnold says. “I witnessed his contract. As soon as he signed, he turned to his agent and said, ‘Right, where is the first game?’ It was Uruguay, Colombia or Chile. ‘OK, we need to start campaigning for the right referee’.”

Arnold’s pitch to Hiddink about taking the job was mostly about the quality of Australian players at that time, including Tim Cahill, Harry Kewell, Mark Viduka, Lucas Neill and Mark Schwarzer.

Arnold’s detractors too easily forget he didn’t have that type of firepower, as the Socceroos grappled with lockdowns and border closures because of COVID-19, during two intense years of qualification.

Few gave Australia a chance heading into their final match against Peru, yet they snuck through on penalties – just as they did in 2005.

They did so after Arnold meticulously prepared for a shootout, just as Hiddink had done in 2005 before the second leg against Uruguay.

When Arnold returned to the dressing room that night, he turned on his mobile and it exploded with text messages. One stood out – the message from Guus.

“My big hero,” it read. “Quite a repetition from the early days. So proud of you. You’re a legend. Abrazo – Old Aussie Boss.”

From old boss to new.