Everton won at Liverpool for the first time since 1999, with their 2-0 success ending a run of 24 games without victory against their oldest rivals.

They led inside three minutes through Richarlison and doubled that advantage late on courtesy of a Gylfi Sigurdsson penalty. However, the main man to credit for the Toffees’ success was manager Ancelotti, Carragher told Monday Night Football.

“I never gave a man of the match in the game for whatever reason, maybe it slipped my mind. There was probably three or four Everton players you could have given it to, but I watched the game again yesterday morning when I got up and their man of the match was the manager, Carlo Ancelotti,” said Carragher.

“It’s 22 years since they won at Anfield, 1999. But that’s just the Premier League; notoriously, Everton’s record at Anfield is horrendous. So, to actually win at Anfield for Everton is huge. They’re celebrating like mad, and rightly so.

“Before Saturday, this was Everton’s league record at Anfield since 1962/3 – 58 games, six wins in 58. That’s why that was so big, what happened on Saturday night.

“Forget the ’22 years, Everton’s record at Anfield’. Even with the greatest team, you go through the 60s – Everton won a title in the 60s, an FA Cup, got to another final – only won once at Anfield. They won the league in 1970. Again, the 70s, only one win at Anfield. The 80s, Everton’s greatest-ever team – only won twice there.” 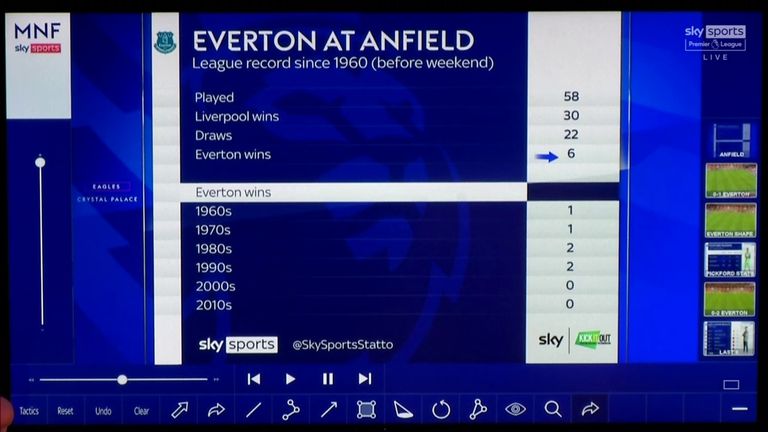 Carragher played in his fair share of Merseyside derbies himself as a Liverpool defender, and was left feeling his former club had enjoyed a mental edge over their near-neighbors which had inhibited Everton’s hopes of taking the bragging rights in games between the pair down the years – something Ancelotti managed to overcome last weekend.

“I’ll tell you the reason, in my experience, the record is so poor, and also at Goodison in the last 20 years as well,” he said. “Everton never get the derby right emotionally. They’re either too up for it, and they get players sent off, or they’re absolutely terrified going into games, certainly at Anfield.

“And the reason I say Ancelotti won Everton that game, is that he took the emotion out of the game, with the team he picked. So when that team came in, Evertonians, getting ready for the game, their heart sank. No Calvert-Lewin, and no Allan. Now, Allan hasn’t played for two months. Calvert-Lewin was coming back from a hamstring injury. So it’s the right decision.

“But emotionally at times, Everton see the derby as the biggest game you have to win. Roberto Martinez told me a story where he almost felt pressured to play Gareth Barry in a derby game at Anfield and he wasn’t 100-per-cent fit.

“He got injured, they lost the game, and he missed an FA Cup semi-final, and he always looks back at that as a huge regret. Ancelotti, again, ended up saying this is three points for our European ambition, forget Liverpool.”

The tactics behind Everton’s historic victory

While much of Ancelotti’s work to win the derby was done ahead of kick-off, the game could not be won, even with Liverpool’s nightmare run of form, without Ancelotti’s players executing a solid plan to stifle the reigning Premier League champions.

Carragher credited the former Chelsea, Real Madrid and AC Milan boss with winning the tactical joust against Jurgen Klopp – and pointed out exactly how he set up his side to finally break their Anfield duck.

He said: “In the first derby, Liverpool scored after two or three minutes with Mane, because they exposed Rodriguez, who at times can leave his right-back really exposed.

“So he didn’t do that in this game, he played off the front – and he’s massively involved in the first goal. He gets in between the lines. When he gets on the ball in these positions, it’s, ‘can he deliver?’

“And in that position, with that pass on to Richarlison, there’s very few who can deliver that pass better than James Rodriguez. Tactically, they got that right playing him in a 10 position, because he does what he’s in the team for, to deliver that pass – and Everton get off to a great start.

“I think was primarily a back four, but there was a man-marking system on this right side. It was Holgate with Mane, and it was Seamus Coleman with Andy Robertson, and that’s what caused the confusion. 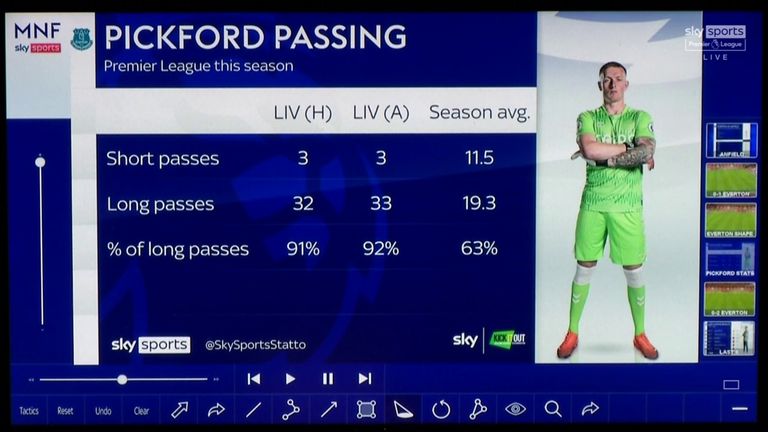 “When you play against Liverpool, they’re a team that press really well. The way you stop that is to just kick along, and it took me back to Jose Mourinho with Chelsea when Liverpool almost won the league under Brendan Rodgers, and we highlighted on this show, Mark Schwarzer kicked everything long – it beats the press.

“Then you go to Calvert-Lewin. And I was talking in commentary about when he probably will come on – I thought the only way he was going to come on was if Everton were losing and he’d join Richarlison, but he brought him on at 1-0.

“And that’s what won them the game, keeping the two attacking players on the pitch. I said at the time I don’t actually think [their second goal] was a penalty but it doesn’t matter, it didn’t affect the result.”

Gary Neville claims 'something is growing' at Manchester United