Jamie Carragher and Richarlison shared a friendly exchange following Tottenham’s 2-0 triumph over Nottingham Forest on Sunday – despite the Liverpool legend declaring in commentary that the Brazilian “winds me up”. The pair’s feud from last season appeared in danger of being re-ignited after Carragher slated the Spurs star for showboating in the latter stages of his side’s City Ground success.

A matter of minutes after Richarlison helped clinch all three points for Tottenham with an audacious outside-of-the-boot assist for Harry Kane’s second of the match, the 25-year-old found himself at the centre of a flashpoint. In an attempt to run the clock down in the dying minutes of normal time, Richarlison flicked the ball up over on the left-hand touchline before performing some flamboyant keepy-uppies.

After then seeing his attempted pass intercepted, the summer singing from Everton was clattered by Forest’s Brennan Johnson and landed upon by Neco Williams following a heavy touch from the former. Though Johnson was the one penalised for his overzealous challenge, Carragher lambasted Richarlison for his role in the incident, admitting that the Tottenham forward – who he was involved in a war of words with last season – “winds me up”.

The Sky Sports commentator said: “It does wind people up. You can’t do that. But what is he doing? He just winds people up that lad, Richarlison. He winds me up. What do you expect him [Brennan Johnson] to do? Yeah, you’re not condoning this but… big Premier League game, passions are running high, superstars taking the mick.” 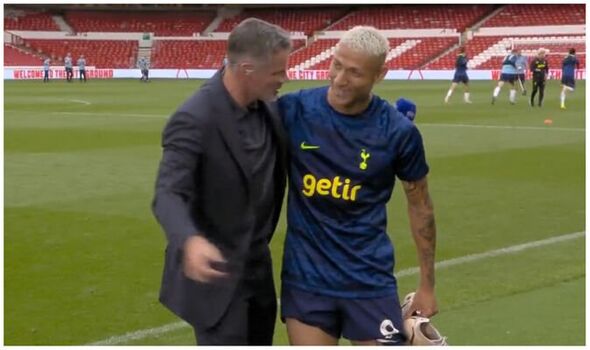 Not long after the full-time whistle, Richarlison was then seen embracing Carragher on the City Ground touchline during a Sky Sports ad break. The pair appeared to laugh and joke with each other before – and after – the Spurs striker shook hands with Carragher’s fellow Sky Sports team.

In reference to a unsavoury Twitter exchange from last season which saw Richarlison demand Carragher “wash your mouth” and express his lack of respect for the Premier League legend, Sky Sports presenter Dave Jones said while talking over a replay: “There has been this sort of long-standing conversation on social media between the two, but as you can see, they are all friends now.” 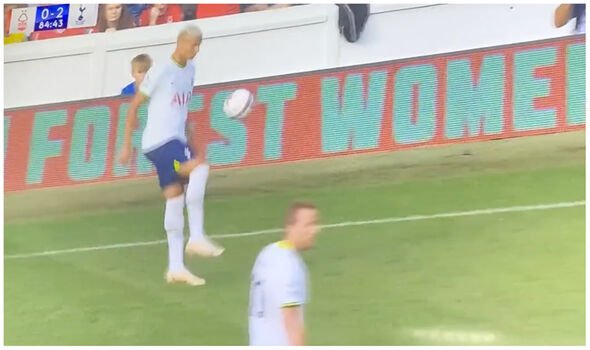 Carragher, who sparked the pair’s long-running feud by demanding Richarlison “get up” after appearing to feign injury in the Merseyside derby at Anfield last season, responded by saying: “As he goes away, I was just checking as he went down hurting, that he was alright there.”

Referencing his high-profile snub from Manchester United superstar Cristiano Ronaldo at Old Trafford in similar circumstances on Monday night, Carragher playfully added: “To be fair, I was just glad he never blanked me!”