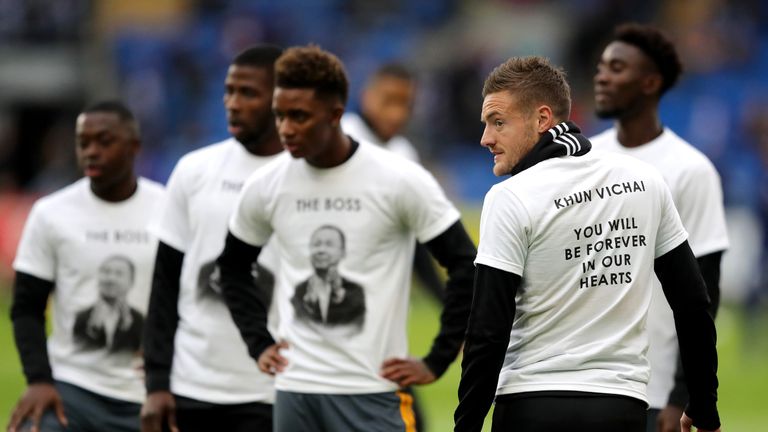 Jamie Vardy and wife Rebekah will auction off their executive box for Saturday’s game against Burnley to raise money for the Vichai Srivaddhanaprabha Foundation.

It follows the death of the Leicester owner and four other people in a helicopter crash at the King Power Stadium on October 27.

Previously named the LCFC Foxes Foundation, it was renamed on Tuesday in honour of Srivaddhanaprabha, who was instrumental in steering the club to the Premier League title in 2016 against the odds of 5,000-1.

Jamie and I are auctioning off our executive box including hospitality and personal visit from Jamie for the upcoming game against Burnley. All proceeds will go to the Vichai Srivaddhanaprabha Foundation email [email protected] to make bids #lcfc

A personal visit from Vardy and a pair of signed boots will also be auctioned off for the foundation, which supports Leicestershire-based causes and builds relationships in the local community.

Also available are a pair of signed boots which were worn by Jamie during the emotional game against Cardiff….. again to place bids email [email protected] #lcfc pic.twitter.com/6LOw8mmkuB

The couple last week laid a wreath outside the stadium, before attending the funeral of the Thai billionaire at a Buddhist temple in Bangkok over the weekend.

‘Quite bizarre’: Adelaide company may take action over A-League logo