Jose Mourinho has been axed following a poor spell from his side Tottenham. The former Chelsea legend was told the news this morning according to sources. First-team coaches Ryan Mason and Chris Powell are expected to take charge for the remainder of the campaign.

Why was Jose Mourinho sacked?

The failure to secure a win leaves them languishing at seventh in the table, meaning they’re currently five points away from Champions League football.

The club is expected to miss out on qualification for the second season running, having previously played in the top competition for the previous four consecutive seasons.

Spurs have taken just one win from their last five games. In fact, since their 3-1 defeat at home to Liverpool on January 28, the side have lost seven of 14 games, winning just five, and conceding 21 goals. 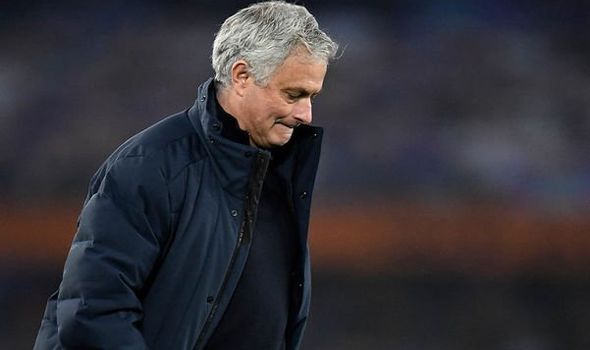 Their European ambitions came to an end last month when they were sent packing from the Europe League.

And they exited the FA Cup in the fifth round following a defeat at Everton.

Harry Kane and his squad will face Southampton on Wednesday night, followed by the League Cup final against Manchester City at Wembley on Sunday.

Should they be able to secure victory, it would be their first trophy since they won the same competition in 2008.

However, it has been suggested the Portuguese boss was axed after a fiery showdown with the club,.

Unconfirmed reports indicate Mourinho refused to take players onto the pitch to train following the announcement of the European Super League.

Spurs fans on Twitter have reacted to the news, with one saying: “This week, Spurs fans should be buzzing. Unfortunately, we’ve become more of a banter club than we ever have been.”

Another wrote: “Nah Jose was defo against the super league and that was the final straw for Levy.”

A third posted: “Big up mourinho actually standing up for football.”

Said Benrahma 'to meet with Brentford this week to discuss future'

Souness slams United for their inconsistency ahead of Liverpool clash