With every goal and week that passes, Diogo Jota further cements himself into Liverpool’s front three… Jurgen Klopp must wonder how the table would look if the Portugal forward had not missed the last three months

He needed a huge helping hand from Rui Patricio, an old friend, but, in one flash of red, Diogo Jota reminded Wolves of better days and provided perhaps another glimpse into Liverpool’s future.

With every goal and week, the forward further cements himself into Jurgen Klopp’s first-choice front three.

How different would this catastrophic domestic season look had he not missed the past three months? 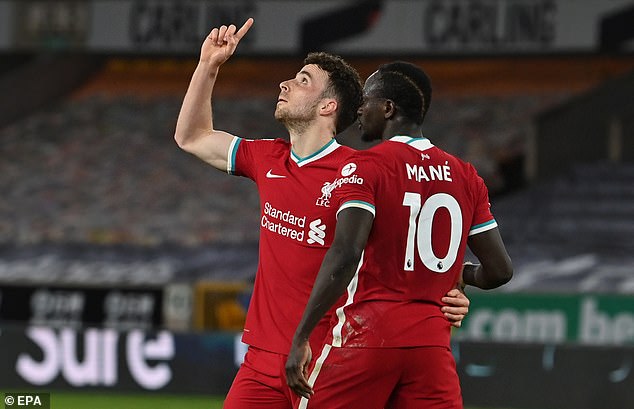 Klopp’s side have been decimated by injuries across the pitch, of course, but their lack of bite cost them most dear. On Monday night, against his former side, Jota needed only one nibble.

Nuno Espirito Santo had promised him a big hug ‘and eventually a kiss’ on this, his first night back at Molineux.

For the Wolves side he left behind — and Pedro Neto in particular — it was a chance to prove how they have filled the void.

For Jota, this was the perfect stage to prove he was worth every penny of the £45million they’d got last summer. Well, £5m at this stage. 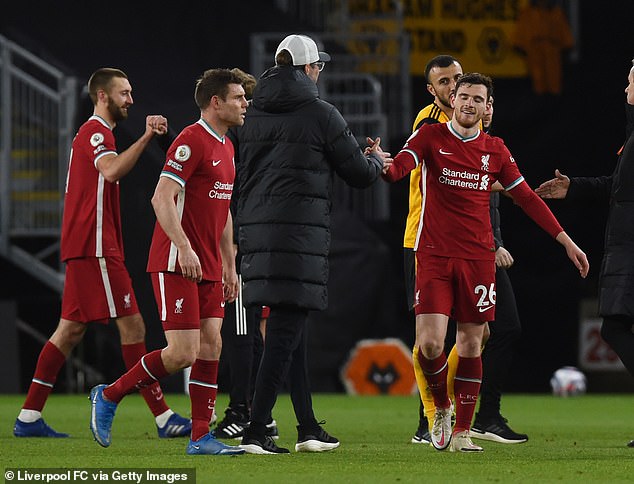 It’s claimed Liverpool owe another instalment of £12m come the end of the season.

If Jota ends this first season like he started it, Klopp won’t begrudge the outlay.

Not when Jota’s pace, movement and goals have added a new dimension to their forward line. Not when he is muscling his way into their fabled front three.

With Roberto Firmino’s goalscoring and creative numbers on the slide, Jota has proven far more than a capable understudy.

That much was clear in the nine goals he scored in his first 17 appearances. And how much Liverpool missed him. 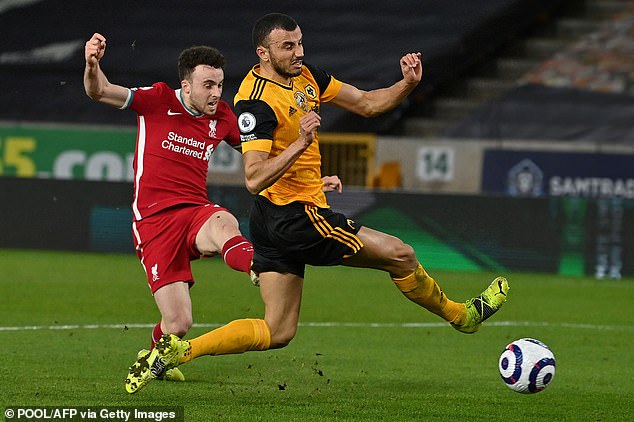 Here, on only his second Premier League start since November, he was a passenger for 45-plus minutes.

And then, in first-half stoppage time, he sprung to life and helped cut Wolves to pieces.

The move began with Nat Phillips, who won his header on halfway. He found Sadio Mane, whose neat pass found Mo Salah.

He slid the ball back into the onrushing Mane, who brilliantly helped it on to Jota. One shot, one botched save and one more reminder of Jota’s worth.