Jurgen Klopp says Liverpool are not on a revenge mission against Real Madrid after their 2017/18 Champions League final defeat in Kiev, as they prepare for the first leg of their quarter-final showdown against the La Liga giants on Tuesday evening.

The teams will go head-to-head for the first time since the tempestuous 2018 final in Kiev, where Mohamed Salah suffered a shoulder injury following a controversial challenge by Sergio Ramos as Real claimed a 3-1 win.

Klopp says his side are now built to face an attacking side such as Real Madrid and insists he and his players do not still hold onto the emotion from the final almost three years ago.

“My motivation is at the highest level, we play Real Madrid in the Champions League to get to the next round, it’s not because of 2018,” he said in his pre-match press conference in Madrid.

“But when we get the draw and I see we face them for the first time since then, of course I remember the game. I said it at the time, if someone asked me a week after the game if I would invite Sergio Ramos to my birthday, I would say no. Meanwhile, I would think it about it again now.

“I did not like what happened that night, it was a strange night, but it was long ago. I cannot get that feeling back, that anger or whatever, so I don’t even try. 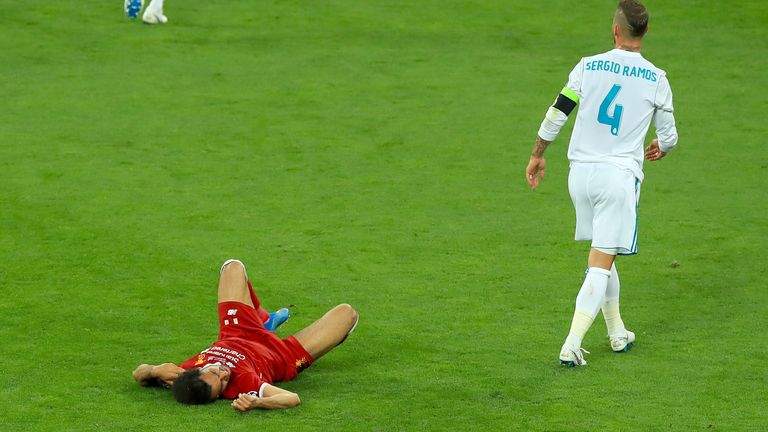 “We are not on a revenge tour here. Life is like this, you try everything to win a game, you lose it and then you meet your opponent again one day.

“Sometimes it’s close enough and you can meet a week or two later and have this kind of emotion still in you.

“I don’t believe too much in revenge but it would be nice to get through against Real Madrid because that would mean we are in the next round and that’s what we actually want to do.”

When asked about Liverpool’s progression tactically since the defeat to Zinedine Zidane’s side in 2018, Klopp says his team are now built to perform against exactly the type of challenge Real Madrid pose.

“We were good in the [2018] game but Real came back. Actually, our team is built for this type of game. We are facing a football-playing side which helps,” he continued.

“We face a football-playing side which is very helpful for football in general but for our kind of defending as well and that’s why we have a chance.”

The Reds boss has heard his side are the underdogs to progress, a tag he welcomes.

He added: “I heard outside already everybody says Real Madrid is favourite. Great, no problem at all with that. They are used to the role and we have no problem with the role of the challenger.

“We want to give it a proper try. We know we were really good that night but 25 minutes being really good in a final, it was never enough. But it was a different time, we were in a different place, a lot of things have happened.”

‘Trent can succeed with trust and faith’

When asked if he felt the right-back had passed a test and proved a point to England boss Gareth Southgate with his display at the Emirates, Klopp rejected the idea his player needed to respond at all, saying: “It was clear that people would say this, you have to give someone a proper knock and then see their reaction. I don’t understand life like this, I don’t understand education like this.

“For me it is different, you can do it by showing trust and faith in somebody and then they can succeed. For us it was not a character test or whatever.

“What we did was not two weeks working on how we can show Gareth Southgate that he was not right. We just wanted Trent to play his best football, that was all. It was an important game, so let’s prepare for it.”