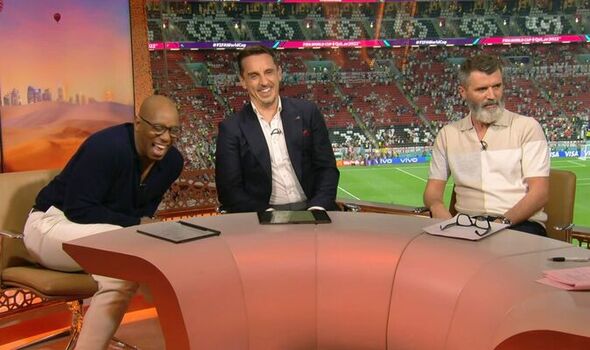 Roy Keane was told to “cheer up” after a comment about England left Ian Wright and Gary Neville in stitches. The trio were in the punditry studio for the Three Lions’ second World Cup group match against the USA on Friday.

ITV showed recorded footage of England players enjoying some downtime in-between matches. Wright joined a few of the squad this week by playing a game of darts.

Keane says that is all well and good and admits the spirit will surely be high following the 6-2 drubbing of Iran. However, he said ultimately the reason they are in Qatar is to win football matches and go all the way to the final on December 18.

Keane said: “They’ve had a good start, six goals. I never believe all that nonsense about team spirit, I never hear a manager or in the media say there’s a bad spirit in the group.

“There should be after the game and three or four days away. They look happy, playing a game of darts, they’re going to be upbeat.

“The most important thing is winning football matches, let’s see if they’ll laugh in a couple of weeks.”

The comment led to Wright and Neville bursting into laughter alongside Keane at the punditry table. Former England winger Karen Carney was pitchside and she said about Keane: “He needs to cheer up. We’ll see at the end Roy, we’ll see at the end.”

Former right-back Neville attended tournaments as both a player and a coach with England. And he says spirit in the camp is vital, especially from the players who are not in Gareth Southgate’s starting XI.

Neville said: “In a tournament when you’ve got 26 players, 15 of them on the bench, eight of them might not even play, you do need a good group. It can bring the group down if the lads who aren’t playing aren’t as important as the lads who are playing.”

Wright saw first hand the mood in the England camp. And he hopes that is a catalyst for a successful tournament.

He said: “If them three guys, [Kieran] Trippier, [Declan] Rice and [Callum] Wilson’s vibe is anything to go by, it’s very cool, very calm, jovial, very focused. It was nice to be amongst, you could feel the energy, very together, it was lovely.”