Arsenal and Chelsea have exceeded expectations under their new coaches, while Tottenham have quietly enjoyed their best ever start to a Premier League season. Jurgen Klopp and his Liverpool team have been congratulated for their unbeaten start and rightly so. Praise all round then. And yet, there at the top of the table are Manchester City.

So has the best chance of toppling the champions already gone?

It might seem a strange thing to argue but Pep Guardiola has managed to negotiate the past two months without the services of arguably the outstanding player in the competition. Mohamed Salah took the individual honours last term and Eden Hazard has received the plaudits so far this season. But Kevin De Bruyne, City’s difference maker, is now back.

There was an assist on his return to the starting line-up away to Shakhtar Donetsk – of course there was – but his brief cameo off the bench against Burnley was equally enjoyable. City were already three up when he came on with a little over half an hour remaining but his delicious blind reverse pass to Riyad Mahrez was still one of the game’s highlights.

That chance was spurned but De Bruyne did deliver the initial forward pass that got City up the pitch for Mahrez’s goal soon after. “Kevin helped us to make another step, another rhythm,” said Guardiola afterwards and it was true. De Bruyne was involved in the build-up to all six of the moves that led to City’s attempts on goal while he was on the pitch.

The defending champs might be the best. De Bruyne makes them better.

That is surely the fear for City’s rivals. Nine times this season Guardiola has named a Premier League line-up that has not included his star man. Nine times this season City have got through the game unbeaten – seven wins and two draws. It is no great surprise given the options at the club’s disposal but it still represents an opportunity missed for the rest. 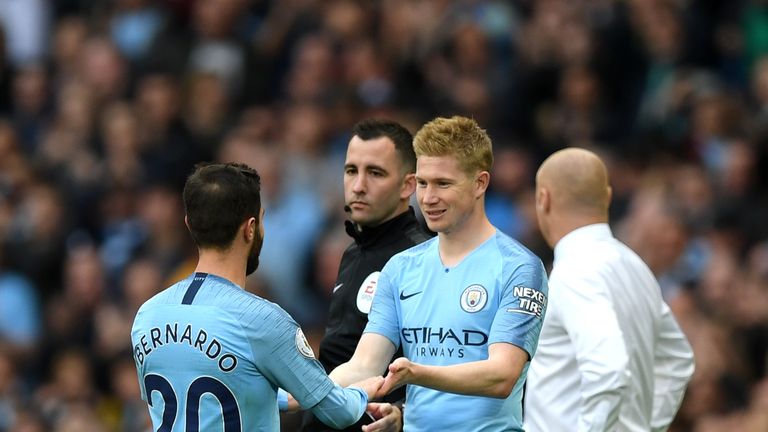 “I would have preferred to have had Kevin this two months,” said Guardiola on the eve of the midfielder’s return. “The important thing is that the team was quite stable. It was solid. Now he has come back he has to fight and play as good as possible to be part of the team because the other ones have also played good up until now, so we will see what happens.”

There was a smirk on Guardiola’s face when he uttered those words because even at Manchester City, a fully fit De Bruyne is not a man likely to be left on the bench. He started 36 of City’s 38 Premier League games in winning the title, more than anyone else. Rotation is something that happens around him. When back up to speed, expect that to continue. 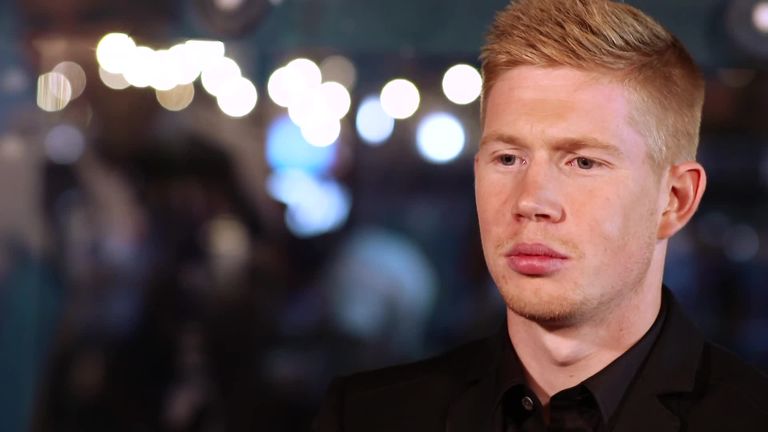 Guardiola is hardly short of options, of course. Earlier this season he claimed it was Bernardo Silva plus 10 others. If David Silva is also included, that leaves only two places for the trio of Mahrez, Raheem Sterling and Leroy Sane even before De Bruyne’s return. But in the congested world of the Manchester City midfield, all men are not equal.

De Bruyne provided the most assists, created the most chances and the most clear-cut chances of anyone in the Premier League last season. He is the man most likely to make things happen and, at 27, in the prime of his career. Injuries are never ideal, particularly knee problems. But perhaps De Bruyne will even benefit from a delayed start to the season.

After a hectic summer in which Belgium finished third at the World Cup in Russia, he can return mentally fresh and ready to go. Back at it, as the man himself put it in a social media post on the day before the Burnley game. “He is back and he will help us to achieve what we want to do,” said Guardiola rather ominously after that victory.

De Bruyne is ahead of schedule having initially targeted next month’s Manchester derby as the date for his return. The bad news for United is that he will be well into his stride by then. The bad news for every rival is that they needed a head start and instead City go into the game against Spurs at Wembley on Monday knowing a win will put them top once more.

And knowing that Kevin De Bruyne is back.