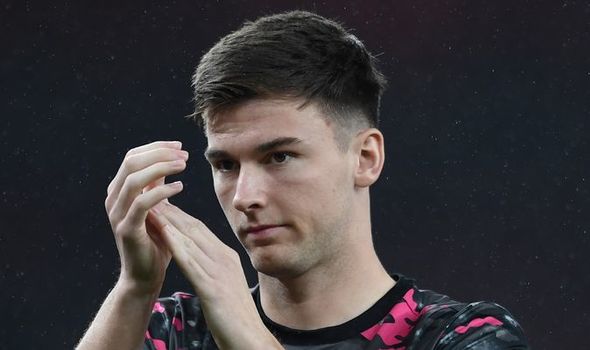 Arsenal left-back Kieran Tierney made his return from injury in Scotland’s crucial World Cup qualifying clash with Moldova and made a stunning tackle that will have caught the attention of Mikel Arteta. The 24-year-old has been absent for nearly a month with an ankle injury.

Tierney was a slightly surprise inclusion in the Scotland team on Friday night given that he has not played for Arsenal since October 18.

But Steve Clarke’s use of the defender was justified when he made an incredible tackle to deny Moldova a goal late in the game.

Scotland led 2-0 when the hosts were awarded a penalty in the 80th minute.

Vadim Rata saw his spot-kicked blocked by veteran goalkeeper Craig Gordon but seemed destined to tuck the rebound away and set up a nervy final 10 minutes for Scotland.

But, somehow, Tierney came out of nowhere, making a fantastic sliding challenge on the goal-line to divert the ball away for a corner.

It was also a brave challenge given that Tierney collided with the post in the process. He had to time the tackle perfectly to prevent conceding another penalty.

The initial attention was paid to the save by Gordon, but Sky Sports commentator Ally McCoist wanted to point out the tackle by Tierney.

“Listen, never mind the save. The save is brilliant,” former Rangers striker McCoist said.

“What about Tierney? Unbelievable, that is. I’m telling you, that’s incredible.

“The save is wonderful but the challenge by Tierney is ridiculous. It’s brilliant.”

McCoist continued to gush about Tierney’s tackle long after the incident. The resultant corner was cleared and the 59-year-old could be heard saying: “The save is excellent. I’m thrilled with the save, [but] I’m double-thrilled with Tierney.”

Commenting over another highlight of the incident, McCoist continued: “It’s brilliant – watch him. Eyes on Tierney. He (Rata) thinks he has a tap-in – he has got a tap-in!

“Tierney comes from nowhere. Absolutely nowhere. Great save and then that (tackle) is brilliant. It really is.”

Tierney, whose Scotland side confirmed their place in the World Cup qualifying play-offs with their win, might face a fight getting back in the Arsenal team.

Summer signing Nuno Tavares has deputised excellently at left-back and has played a key role in the Gunners’ resurgence.

Arsenal have won their last three matches and are now unbeaten in 10 games. It is a remarkable turnaround by Arteta since their disastrous start.

The Spaniard oversaw three consecutive defeats at the start of the season. Arsenal entered the September international break bottom of the Premier League and without a goal.

Arteta must now decide whether Tierney goes straight back into his team or whether he must bide his time. The former Celtic star’s tackle for Scotland might have made the decision easy.

How Manchester United could line up with Bruno Fernandes