A weekend marred by highly-contentious decisions has revived opposition to the VAR technology, with the A-League’s director of referees Strebre Delovski forced to apologise after a trio of questionable penalties gave Adelaide United an unlikely 3-2 win over the Central Coast Mariners on Friday night. 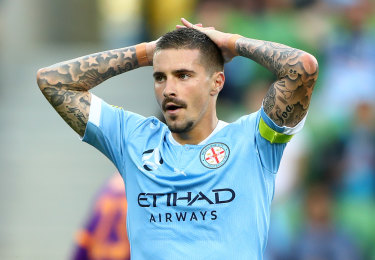 Melbourne City star Jamie Maclaren is no fan of the VAR.Credit:Getty Images

It has been a mostly blemish-free season so far for match officials but the latest controversy has stirred up old questions amongst players, coaches and fans over whether the VAR technology – which reportedly costs clubs around $100,000 per season to operate – is actually doing more harm than good.

Brought in ostensibly to eliminate the “howler”, the VAR did not overturn Adelaide’s first or second penalties – which Delovski admitted were wrongly awarded by referee Adam Fielding – and spotted a handball by Mariners defender Kye Rowles, which was in line with IFAB’s interpretation of the rule, for the third.

Maclaren, whose City side face Sydney FC in a grand final rematch on Tuesday night, could not hide his frustrations in an interview with the ABC Grandstand Football Podcast.

“We as players, if we don’t perform to our best, we get told about it,” Maclaren said. “We wake up the next morning and it’s in the papers, but the referees, they get away with it.

“They finish the game and they can just hop in their car and drive home without explaining their decisions. 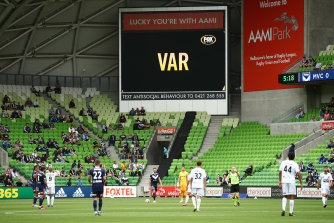 The VAR has split opinion in Australia since its introduction in 2017.Credit:Getty

“Something’s got to change because I’m getting messages from guys in the UK who are watching the A-League saying ‘I’ve turned my TV off because it’s embarrassing’ … I can only imagine how bad it is for people at home and our fans.

“We want to grow this game but it’s killing our game.”

Maclaren was flabbergasted with the first two penalties given to Adelaide but particularly the opener, in which captain Stefan Mauk appeared to initiate contact with Central Coast’s Ruon Tongyik.

“I can’t see how VAR have [not reversed] Mauky’s first one. I try and milk penalties sometimes but that was beyond,” Maclaren said.

“Mauky copped some abuse, which he shouldn’t have, and he did rightfully put on his social media and it’s uncalled for, but at the same time, if we’re going to make these big calls that are effectively coach-killers and result-killers, you need to have these referees and these VARs [explaining themselves].”

VAR operators are being taught to maintain an extremely high bar for intervention with on-field decisions – perhaps out of fear of angering fans for overusing it – but in the instance of Mauk’s penalty, Delovski told the Herald and the Age that VAR Kurt Ams should have stepped in.

APL commissioner Greg O’Rourke declined to comment on Monday, but sources say A-League clubs have no intention of abandoning the VAR system, despite its widespread unpopularity.

The Mariners, meanwhile, are appealing a red card given to Rowles after the final whistle, which Fielding brandished as the 22-year-old remonstrated with him as he walked off the pitch at Coopers Stadium.

The club believes a more experienced referee may have warned Rowles away rather than instantly dishing out a red, which rules him out of their next clash against Perth Glory on March 2. Coach Alen Stajcic also received a yellow card, and said on Monday he still does not understand what it was for.

Stajcic said official apologies and acknowledgements did little to comfort his side, who remain four points clear on top of the A-League ladder but could have an even bigger buffer had those decisions not gone against them.

“That doesn’t bring back the match or the three points,” Stajcic said. “I don’t see why they need to apologise or say why they got it wrong.