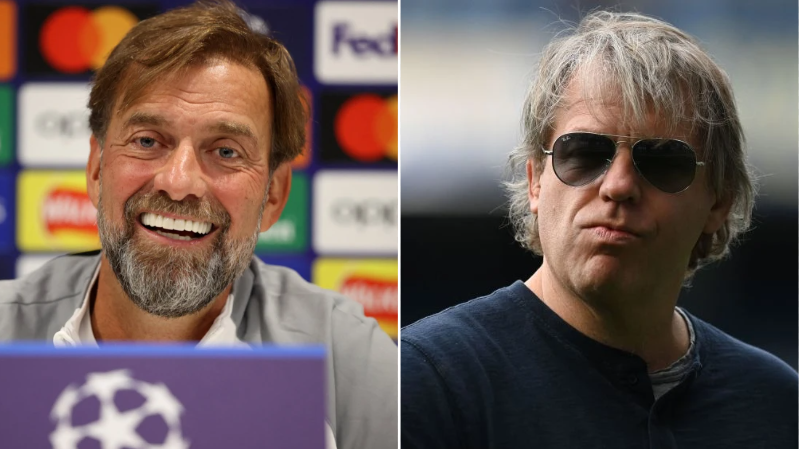 Jurgen Klopp seemed confused by Chelsea owner Todd Boehly’s idea of a north vs south Premier League All-Star game, questioning whether anyone wants to see it, when it would happen and whether the Harlem Globetrotters might be involved as well.

The Blues co-owner and chairman was speaking at a business conference on Tuesday and said that he hoped the Premier League would embrace some ideas from American sport.

He suggested a north vs south Premier League All-Star game, similar to those in MLB, NFL and NBA, in order to raise money to give to the EFL pyramid.

‘Ultimately I hope the Premier League takes a little bit of a lesson from American sports,’ said Boehly at the SALT Conference. ‘And really starts to figure out, why don’t we do a tournament with the bottom four sports teams, why isn’t there an All-Star game?

‘People are talking about more money for the pyramid, in the MLB All-Star game this year we made 200 million dollars from a Monday and a Tuesday.

‘So we’re thinking we could do a north versus south All-Star game for the Premier League, for whatever the pyramid needed quite easily.’

The idea was floated to Klopp after Liverpool beat Ajax in the Champions League on Tuesday night and he was surprised to hear it, especially coming from someone who has only been involved in English football for a short time.

‘He doesn’t hesitate, he doesn’t wait long!’ Klopp said at a press conference.

‘Great. When he finds a date for that he can call me. He forgets that in the big sports in America, these sports have four-month breaks so they’re quite happy they can do a little bit of sport in these breaks. It’s completely different in football.

‘Does he want to bring the Harlem Globetrotters as well and let them play a football team?

‘I’m surprised by the question so please don’t judge my answers too much, but maybe he can explain it to me at one point.’

Other than the date and the organisation, Klopp is also not sure that rival teams would be keen to work together for the venture.

‘I’m not sure people want to see that,’ said the German. ‘Imagine that, [Manchester] United, Liverpool, Everton, Newcastle players all on one team that’s not the national team, just a north team. Interesting game.

‘All the London guys together. Arsenal, Tottenham. Great. Did he really say it? Interesting.’

MARTIN SAMUEL: If kicking the ball is a red card, we're in trouble