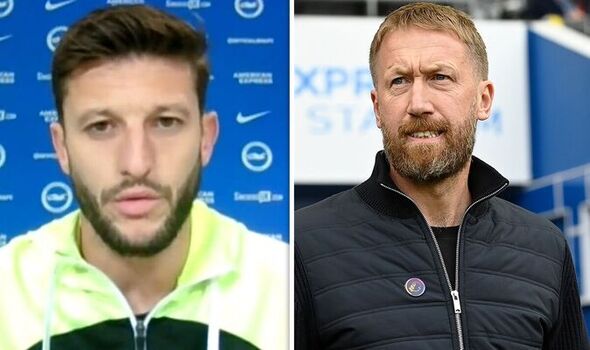 Brighton star Adam Lallana admits he was not surprised that Graham Potter was booed on his return to the club. Potter left the Seagulls in September to replace Thomas Tuchel at Chelsea.

He faced his former side for the first time at the end of last month. And it was an afternoon to forget for Potter and his team.

Brighton ran out 4-1 winners at the Amex to condemn Potter to his first defeat as Chelsea boss. He was given a frosty reception from the home supporters despite his successful three-and-a-half years in charge of the club.

Lallana still has sympathy with the Brighton fans, who he claims were hurt by Potter’s exit. And therefore he does not see a problem with the reaction they gave their old manager.

Lallana told talkSPORT: “It didn’t surprise me. It must have been very difficult for them and I had a lot of sympathy for them because it’s still so raw for all the Brighton fans and people associated with Brighton.

“It was a bit pantomime-y but for them it wouldn’t have felt like that, it would have hurt a lot because they still care about Brighton, all of them do.

“So it probably wasn’t avoidable, it was just maybe something they were going to have to have gone through and I think the more times they come back, the easier it will be and the better the reception will be. But it can’t have been easy for them.”

Following the defeat, Potter claimed he had left Brighton in a good place and felt the reaction was undeserved. He said: “I have nothing to say sorry for or apologise for. I did a good job, you can see the team is a good team.

“I took over when they were fourth from bottom in the Premier League and were probably the third-worst team. I hope for their sake, the next managers do as good a job and that’s brilliant for them.”

Ex-Tottenham midfielder Jamie O’Hara also waded into the row. He was on Potter’s side and hit out at the Brighton fans.

“He went there when they were fourth from bottom. He’s changed the fortunes of the club. He’s given the club a philosophy, an identity.

“He left them in fourth place in the Premier League with a brilliant squad, the club have made loads of money on players he’s brought in. It’s a selling club and he’s always made money and profits for them and they play brilliant football!”

Permanent work from home is here. Will cities survive?