It was a historic week in the Women’s Super League as Old Trafford played host to its first game, with Manchester United recording a 2-0 victory over West Ham United.

The occasion was soured by the lack of supporters in the stands, but it didn’t stop 19-year-old Lauren James from producing an immaculate performance and leading her side to the three points.

James, the younger sister of Chelsea and England men’s full-back Reece James, added the title of the first player to score in a WSL fixture at Old Trafford to her list of accolades – she also netted the Reds’ first goals in the WSL, Championship and FA Cup. American forward Christen Press then extended her side’s lead to two shortly after.

Despite the result, United head coach Casey Stoney found herself coming away from the match with a feeling of disappointment after a poor first half performance.

“I was a bit disappointed with the way we played in terms of an exhibition at Old Trafford, but of course we all want to do it again and be a bit better, in front of a big crowd, next time we’re here,” she said.

Just over four miles away, another fixture took place on Saturday evening as neighbours Manchester City had to wait until the dying minutes of the game against Reading to earn the breakthrough and rescue the three points.

A wonderful run from Lauren Hemp, in which she careered past four players, allowed her to square the ball to Chloe Kelly who atoned for the wastefulness that her side had displayed throughout the rest of the game.

It had looked as if the Blues would play out a goalless draw that would have hampered their title ambitions, but the late goal put paid to those worries.

In Saturday’s other game, Arsenal completed a comfortable 3-0 victory away to Spurs at the Tottenham Hotspur Stadium in the latest North London Derby.

It was Vivianne Miedema who stole the show, her first-time volley from an out-swinging Katie McCabe corner the best moment of the match. McCabe and Caitlin Foord also found themselves on the scoresheet.

“You always want to win these games by as many goals as possible and we probably scored the more difficult goals than the easy ones today,” said Arsenal head coach Joe Montemurro after the match.

“The most important thing for us is that we are getting into these positions where we create these opportunities, and we are doing it our way with game control. Today was a great example of that.” 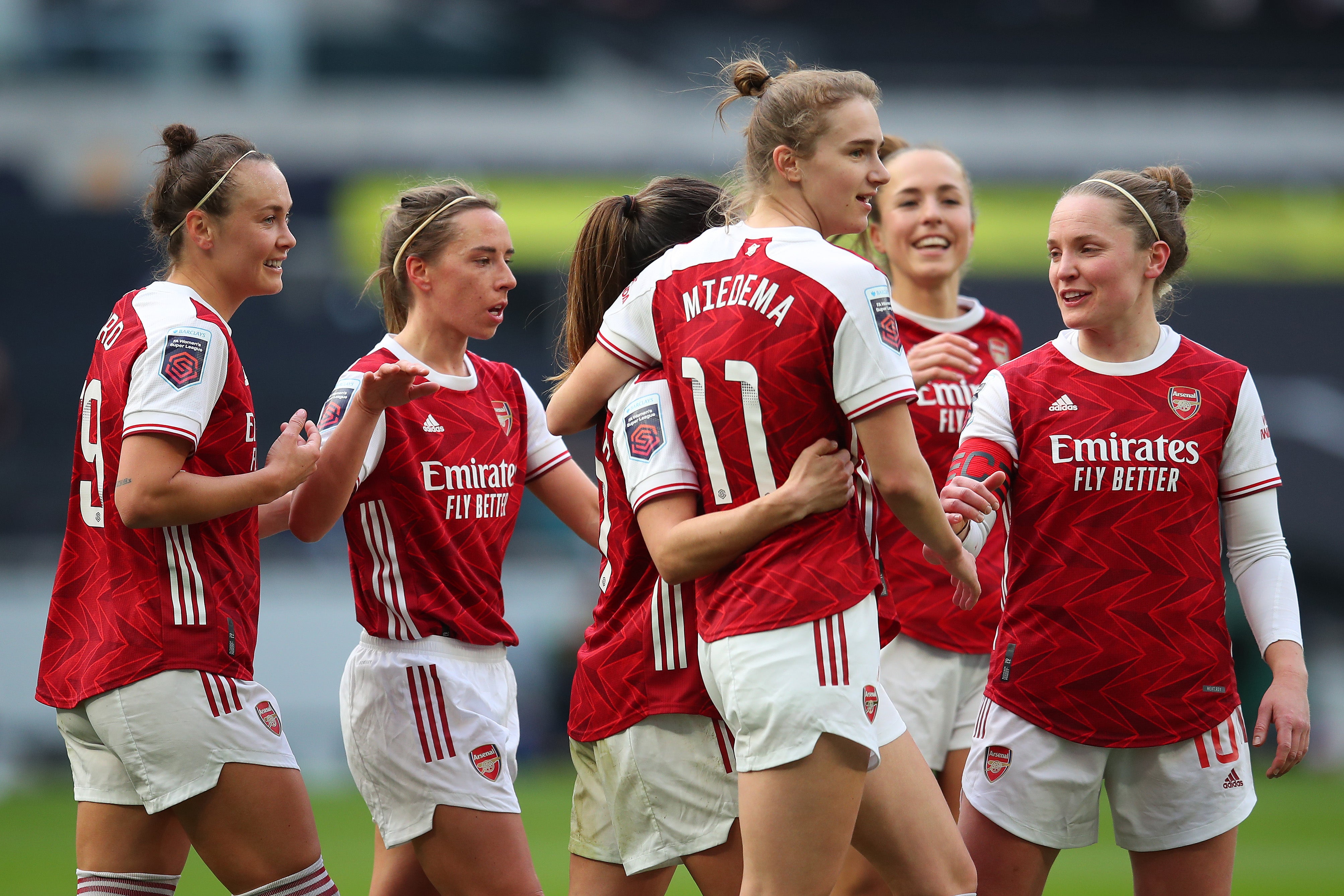 In a six-pointer at the bottom of the table, the spoils were shared between Bristol City and Birmingham City.

Charlie Wellings fired in the first from close range for Bristol, latching on to Carla Humphrey’s effort that failed to hit the target.

Blues captain Christie Murray replied in the second half for the hosts, rifling in an effort from the edge of the box towards the top-right of the goal after picking up a loose ball from a corner.

Bristol are now two points ahead of bottom side West Ham, although the Irons have two games in hand. Carla Ward’s Birmingham are four points off the foot of the ladder having played one more game than the Hammers.

Everton returned to winning ways on Sunday afternoon, recording a 5-0 rout away to Brighton and Hove Albion.

Izzy Christiansen opened the scoring with a penalty that was quickly followed up by Hayley Raso’s first goal of the game one minute later.

Raso then converted twice more to pick up a perfect hat-trick, while Simone Magill also scored one.

Table-toppers Chelsea, meanwhile, recorded yet another victory as they look to retain the Women’s Super League title. 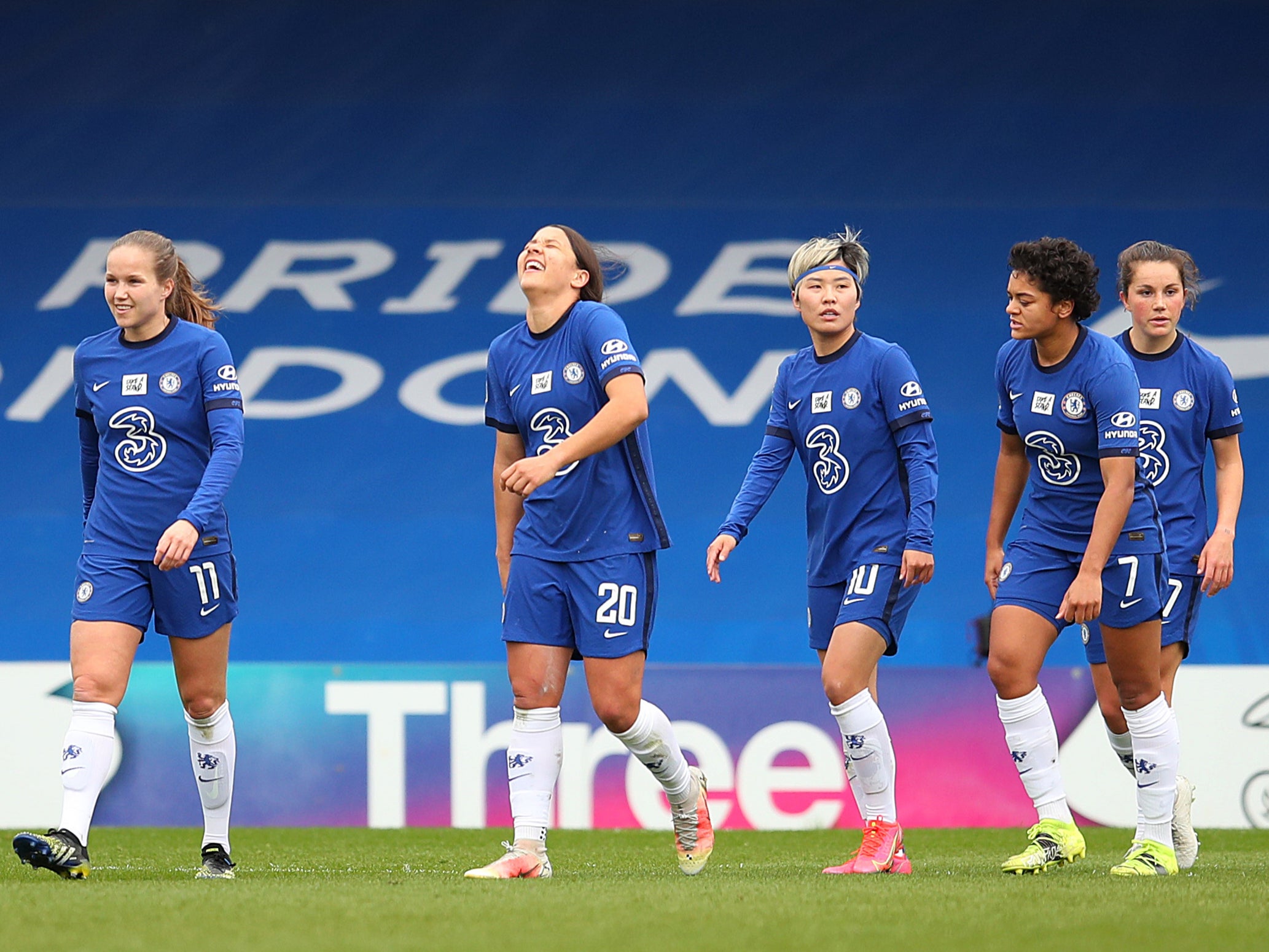 Coming into the match off the back of a 2-1 win against Wolfsburg in which Sam Kerr opened the scoring, the common combination of Kerr and Fran Kirby yet again came together for both of the London side’s goals as they set aside Villa 2-0.

For Chelsea head coach Emma Hayes, it was a displeasing performance in which she thought her side should have performed better.

“I was disappointed about some of the standards I uphold dearly about what you need to do to win football matches,” she said after the match.

“There are certain fundamentals I expect of the group that weren’t followed. We did enough to get over the line, but we’ll have to improve. I liked the response from my team at half-time.”