It is tempting to ask exactly how much time Leicester City spent on the defensive side of the game during the World Cup break.

This result made it three defeats in a row for the Foxes since the restart, with six goals conceded.

It took two freakish own-goals from Wout Faes to ensure defeat at Liverpool and but it was a far simpler effort that cost them here, as Aleksandar Mitrovic took advantage of woeful work at the back to equal his best-ever Premier League goal tally. 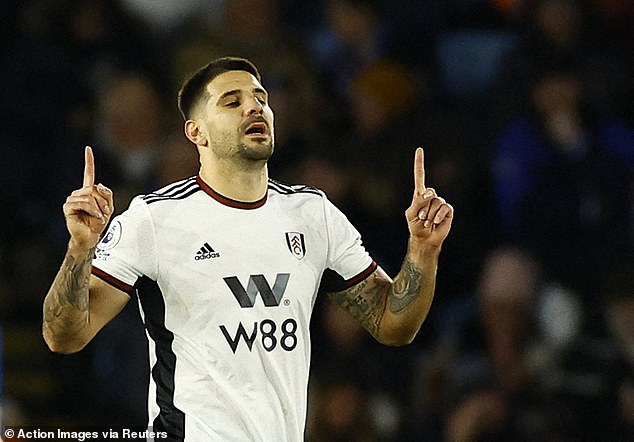 Aleksandar Mitrovic celebrates after breaking the deadlock against Leicester on Tuesday 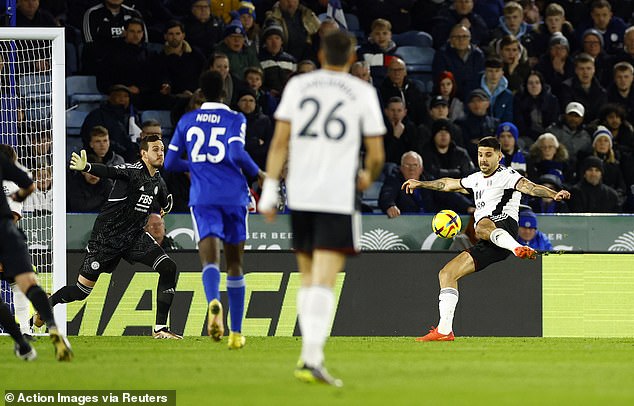 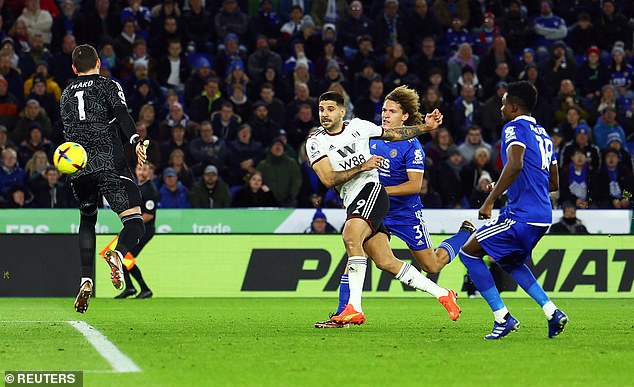 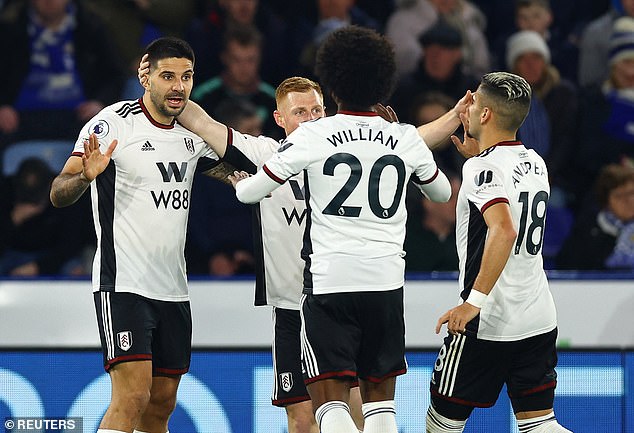 With this win Fulham surpassed their points total for the entire 2018-19 season, and levelled their tally for the 2020-21 campaign.

They were guilty of time-wasting throughout and rode their luck, especially in the second half, as Youri Tielemans hit the bar with a stunning volley and Ayoze Perez, Harvey Barnes and Jamie Vardy missed excellent chances, but the Londoners were always dangerous going forward.

After their rapid improvement before the World Cup, these are troubling times again for Leicester.

Kiernan Dewsbury-Hall was injured before kick-off and Boubakary Soumare pulled up inside eight minutes, meaning they are without nine first-teamers including their best player, James Maddison, and captain Jonny Evans. 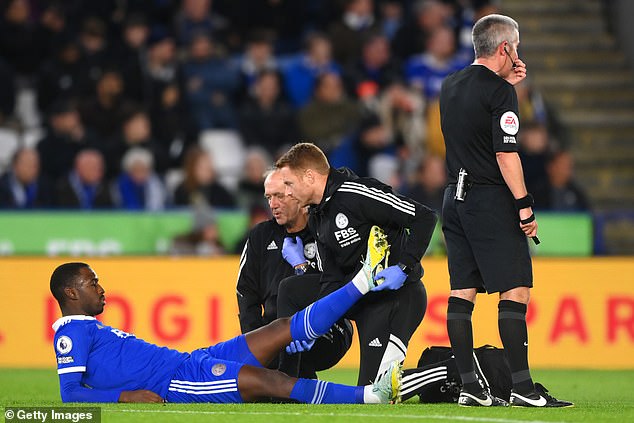 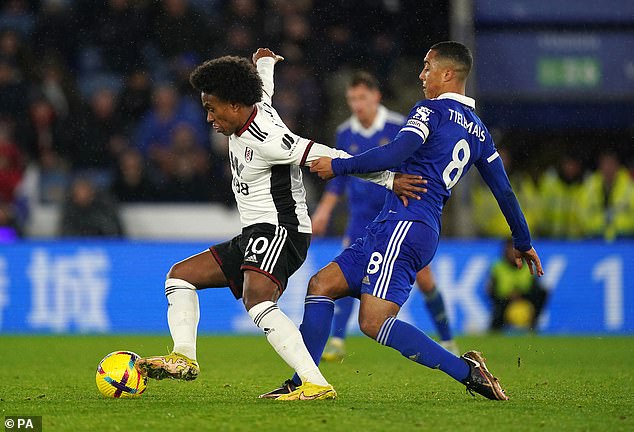 Vardy runs as hard as ever but turns 36 later this month and is struggling to find the old spark. Boss Brendan Rodgers would like three new signings this month and the club need to back him if they are to avoid being dragged again into relegation trouble.

Leicester were already missing seven players when Dewsbury-Hall had to be replaced before kick-off by Wilfred Ndidi due to a late injury, and things went from bad to worse when Soumare came off after only eight minutes with what appeared a hamstring problem.

By that time, Willian had already wasted two good chances for the visitors against a desperately flat Leicester side, and it was no surprise when the home side fell behind in the 17th minute.

Mitrovic had just had lengthy treatment following a heavy challenge on his ankle by Ndidi, but he had recovered in time to control Willian’s cross and guide home his 11th goal of the season from close range. 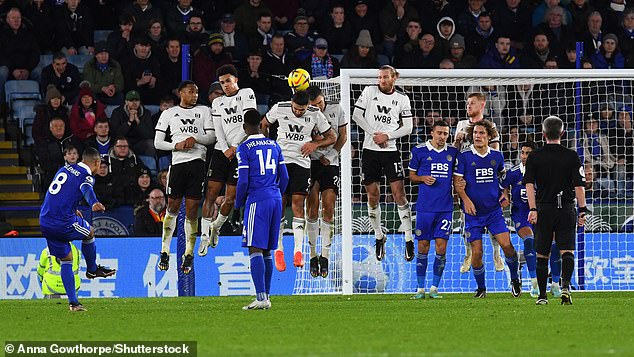 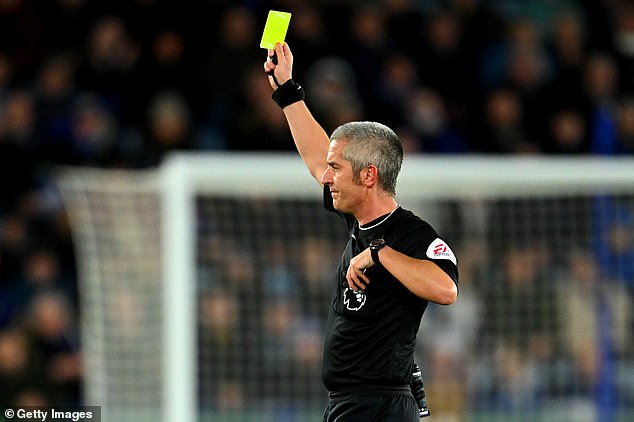 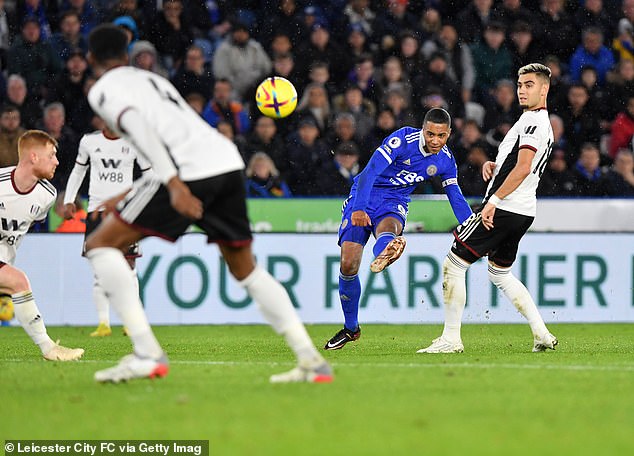 It was a tidy finish by Mitrovic but the defending was appalling. First Daniel Amartey played Ndidi into trouble, and his poor touch allowed Willian to race clear. Then from the cross, Mitrovic found it far too easy to hold off Faes before scoring.

Leicester were giving the ball away with startling regularity and it was no surprised when the boos from the home fans started after only 20 minutes.

Though they remained as jittery as ever at the back, Leicester did at least rally in attack. Perez somehow fired over from an unmarked position six yards out after fabulous work by Tielemans on the right. Moments later, bosses Marco Silva and Rodgers had to be kept apart on the touchline after disputing a challenge by Faes on Harrison Reed that left the Fulham man on the deck.

A deflected shot from Barnes had Bernd Leno scrambling to concede a corner, before the German goalkeeper did well to palm away Vardy’s cross with Barnes waiting at the far post. Timothy Castagne met a cross from Marc Albrighton, who had replaced the injured Soumare, but steered his header wide. The slight improvement did not spare Leicester from more boos when half-time came. 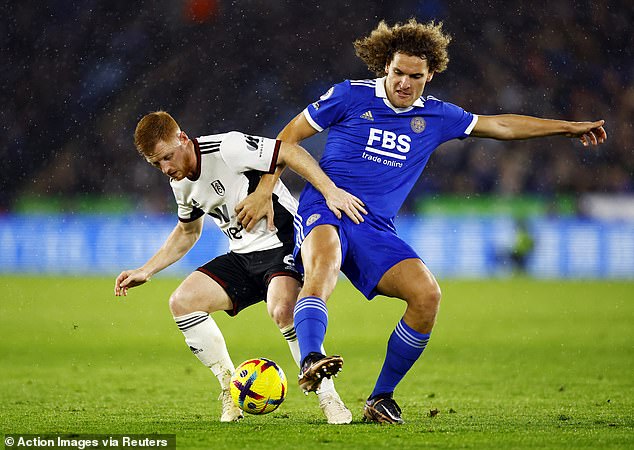 Whatever Rodgers said at half-time did not work initially as Leicester were still careless in possession, but they should have levelled when Barnes ran on to Luke Thomas’ long pass but failed to lift his shot over Leno, who stood up well.

Soon afterwards, Perez set up Vardy for the sort of chance he takes with ease when in top form. Frustratingly for Leicester, this one was drilled against Leno’s legs. Tielemans looked the Foxes’ most likely source of inspiration and curled just wide from 20 yards.

Into the final quarter, substitute Kelechi Iheanacho teed up Perez to bring another important save from Leno. And when Leno was finally beaten by Tielemans’ ferocious effort from the edge of the box, the crossbar came to his rescue.

Substitute Harry Wilson could have made stoppage time a breeze for Fulham only to stab wide when one on one with Danny Ward.