Goals from James Maddison and Harvey Barnes helped Leicester up to second in the Premier League with a 2-0 win over Southampton at the King Power Stadium.

Maddison’s seventh goal of the season gave the Foxes a half-time lead (37) as he spun away from Jack Stephens to collect Youri Tielemans’ pass before firing high into the net beyond Alex McCarthy.

Stuart Armstrong came closest to rescuing a point for Southampton after his long-range shot struck the crossbar, while Jamie Vardy missed a glorious chance to put the contest to bed when his close-range shot was saved by McCarthy before he was forced to hobble off late on.

Barnes sealed only Leicester’s fourth home league win of the season in the fifth minute of stoppage time as he collected another Tielemans pass before confidently stroking his shot beyond McCarthy.

The result moves Leicester above Manchester City and Liverpool, who face Manchester United at Anfield on Sunday, live on Sky Sports. Southampton stay in eighth on 29 points after 18 games. Man of the match: Youri Tielemans.

How Foxes broke up the top two

These two sides last met in the East Midlands last January, when Southampton emerged victorious thanks to goals from Stuart Armstrong and Danny Ings – and the visitors made life uncomfortable from the outset against Leicester, with Theo Walcott and Che Adams proving a handful.

Leicester, who had lost four of their previous eight home league fixtures, threatened sporadically as Marc Albrighton’s pass was dummied by Vardy for Barnes to shoot first time, but McCarthy saved with two strong hands. Kasper Schmeichel, on his 400th appearance for the Foxes, was alert to keep out Adams’ fierce shot at his near post but the hosts began to crank up the pressure and went ahead in the 37th minute.

After Saints cleared an initial cross, Tielemans’ fine ball put Maddison in and the midfielder held off Stephens to fire a thumping effort from an acute angle that beat McCarthy at his near post. Ibrahima Diallo felt he was fouled by Wilfred Ndidi in the build-up, but VAR Jon Moss may have concluded there had been too many phases between the incident and Maddison finding the net.

After the 4-0 victory over Stoke in the FA Cup third round, Brendan Rodgers reverted back to the same starting XI that beat Newcastle 2-1 in their last Premier League encounter on January 3.

Jamie Vardy led the line with James Maddison and Harvey Barnes in support while Ricardo Pereira was named on the substitutes’ bench.

Alex McCarthy returned in goal for Southampton following his negative coronavirus test but Danny Ings was out as he served a period of self-isolation having tested positive for Covid-19.

That meant Che Adams started up front, supported by Stuart Armstrong and Theo Walcott. Will Smallbone came in for Moussa Djenepo to make only his second league start of the season.

Ralph Hasenhuttl later admitted his players are “too honest” in playing on only to be punished, but Southampton sought and nearly found an immediate response. Armstrong, Adams and James Ward-Prowse combined expertly in midfield to release Ryan Bertrand but the full-back’s shot was brilliantly kept out by Schmeichel as Leicester reached the interval protecting a slender lead.

Within a minute of the restart, Hasenhuttl’s men signalled their intent as Armstrong found Will Smallbone to his left but Schmeichel was equal to his shot before Walcott was unable to readjust his feet on the rebound. 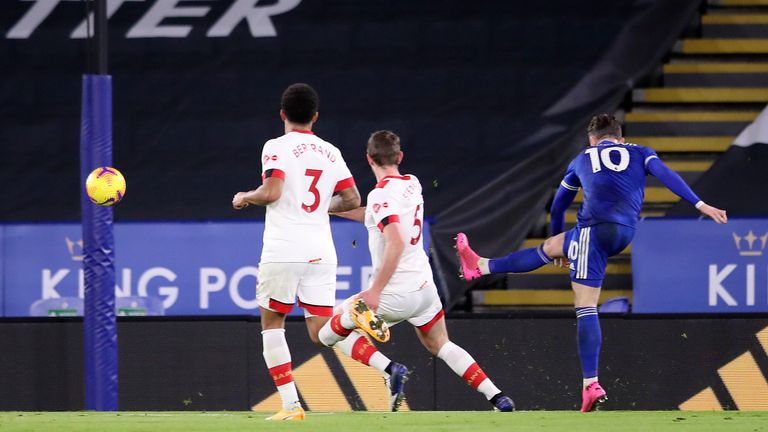 That was Smallbone’s last meaningful act as he was replaced by Dan N’Lundulu following a collision with Timothy Castagne, and Leicester came close to doubling their lead when Vardy headed over Barnes’ cross.

Having been let off the hook, Southampton very nearly levelled when Armstrong took N’Lundulu’s lay-off 25 yards out, and his swerving right-foot shot crashed off the crossbar before substitute Shane Long was offside as he was brought to ground by a relieved Jonny Evans on the rebound.

In an open finale, Brendan Rodgers’ side came within inches of a second as the impressive Albrighton dug out a cross for Barnes to shoot towards goal but Jan Bednarek got back to clear off the line. By now, Southampton were throwing everything forward in search of the equaliser as Ward-Prowse was found in space on the edge of the Leicester penalty area, but he screwed his effort wide. Vardy had a late chance to add to his 13 goals this season as James Justin released him clean through on goal only for McCarthy to brilliantly keep out his close-range shot.

Liverpool and Manchester United, who are one point ahead of Leicester, meet on Sunday, but there are other players in this absorbing title race, with Barnes capping a professional job from the hosts as he collected Tielemans’ pass to dispatch his shot beyond McCarthy in the fifth minute of injury-time. Leicester boss Brendan Rodgers: “It was always going to be a hard-fought game, Southampton have a very good team and work really hard. We were too passive in the first half but then we started to find our way into the game and we talked at half-time about doing the dirty stuff a bit better.

“Not every game in the Premier League is about nice football, you have to fight like hell to get results and we were much more aggressive in the second half. We’re delighted with the three points. The spirit of the team and the collective unit in the second half was really good. Harvey has improved his all-round game and he’s tactical much better.

“His positioning without the ball is now much better so he’s in a better position to threaten. He’s got the bug now of scoring goals, and when the ball hits the back of the net, you want to do it more. He’s getting into really good areas and his fitness and stamina is getting better all the time.

“We’ve got lots of young English players and those playing for us today all impressed. I’m sure Gareth Southgate will be pleased with what he saw, especially in the second half.” Southampton boss Ralph Hasenhuttl: “We gave our maximum against a strong side. We had more chances than them in the first half. It’s normal you take more risks as the game goes on and they had counter-attacks. We missed not only Danny [Ings], but at least one in every key area, so it was difficult for us, but the team was fighting well and this was a chance for the young lads to step in. This is the moment for them to step up.

“It’s never nice to lose a game but we had chances. We hit the bar, we fought with everything we have. We are definitely a team that is never giving up. The quality of the opponent was better than ours today.

“The first goal, you don’t shoot at goal like that every day, it was fantastic from Maddison. We had good chances but we couldn’t finish and that was the difference.

“It doesn’t look good at the moment, we have a lot of injuries and not many alternatives. The good news is we have 29 points and they don’t take them away from us.”

Man of the match – Youri Tielemans 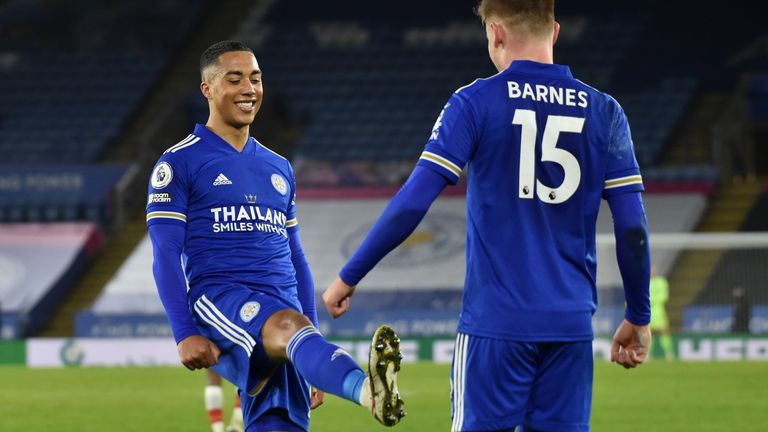 Given the high-pressing tendencies of both these sides, it always felt the midfield battle would prove important and Tielemans dominated this crucial area of the park to ensure Leicester returned to winning ways on home soil.

The Belgian provided both assists but his passes were always purposeful, with 48 of them finding a team-mate, more than any other player. Leicester always looked to build through him when in possession.

Tielemans’ work often goes unnoticed, but after being below his standards in the last campaign, having made his move permanent, he is quietly enjoying a very productive season.