Neil Lennon has vowed to do all he can to repel any moves for Celtic hat-trick hero Odsonne Edouard.

The £9million Frenchman picked up from where he left off last season with three goals in a 5-1 rout of Hamilton.

Jeremie Frimpong and substitute Patryk Klimala also scored as the champions began their quest for ten-in-a-row with a sharp and clinical attacking display. 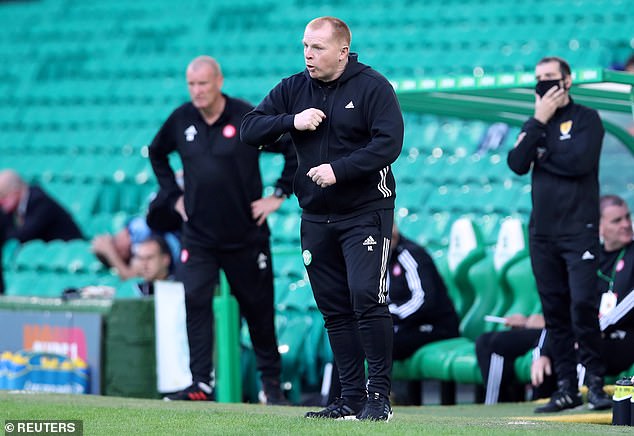 Leicester boss Brendan Rodgers has been linked with a summer move for his former striker at Parkhead, but Lennon issued a hands-off warning to potential buyers.

‘I was really pleased, he scored great goals,’ said the Celtic manager. ‘His volume of goals is really pleasing me.

‘They were striker’s goals today. Normally you associate Odsonne with brilliant individual goals, but there were a few tap-ins and a near-post run.

‘I’m absolutely thrilled and I’m sure he’s happy, but we are looking as a team to build on what we’ve started with. 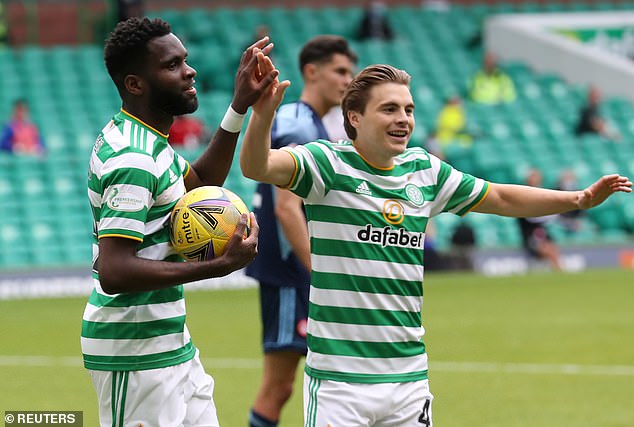 ‘We can’t help that (interest in Edouard), it’s inevitable. But we’ll try to stave off any admirers.

‘I’m sure there are plenty out there, but we love having him here and I’m sure he’s enjoying it.’

Transfer speculation is likely to intensify while Europe’s top leagues are out of action and the SPFL is the only show in town.

Admitting he can do nothing to stop others looking, Lennon added: ‘He’ll be well on the radar of clubs before the start of this season.

‘He had 28 goals up until March last season, and I was delighted with that goal return.’

Two up through Edouard and Frimpong after 30 minutes, a deflected strike from Hamilton’s Scott Martin planted a seed of doubt at half-time. 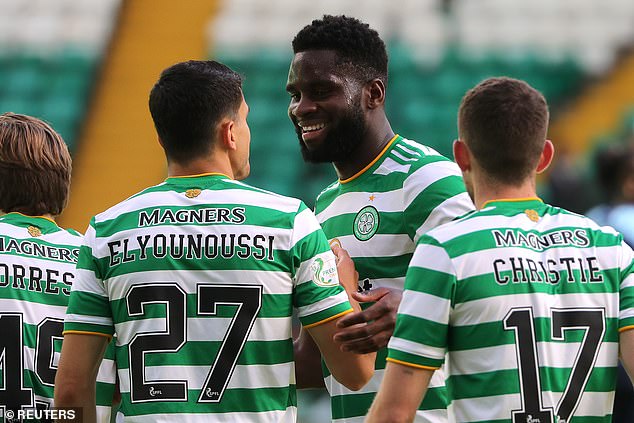 But two more Edouard goals in the opening ten minutes of the second half finished the game as a contest, Klimala claiming a stoppage-time strike to make it 5-1.

‘It’s a brilliant start,’ said Lennon. ‘I’m more pleased with the second half, we had to iron out a few things. We were a little bit passive and lacking in intensity in our play with the ball.

‘We got a brilliant response, a real powerful performance.

‘To score five after such a lengthy lay-off speaks volumes for the players’ mentality and their quality, and their will to win. I’m absolutely thrilled by that.

‘A lot of the boys work on with the coaches behind the scenes, and they got their just rewards today.

‘I didn’t think Hamilton defended badly, we just had real pace and power which is what we probably lacked first half.’

In the market for a striker, centre-half and left-back, the situation concerning Peterborough’s Ivan Toney is likely to be resolved this week. 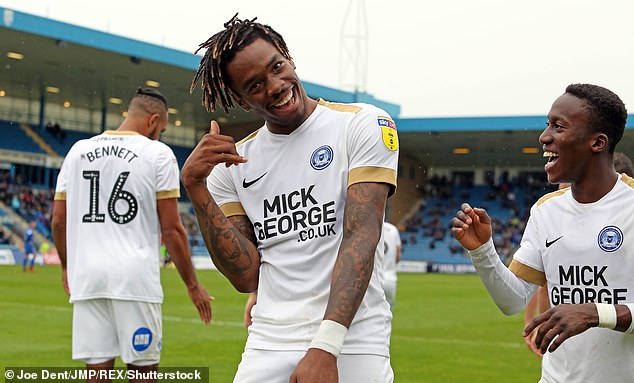 Celtic had a £4m bid turned down last week and, asked if he hoped to do more business, Lennon added: ‘Maybe two or three just to add. We lost seven or eight in the close season.

‘Mo (Elyounoussi) was already here, so we’ve only really brought Vasilis (Barkas) in.

‘In terms of the playing pool we’d like to add two or three more if we can.’

Pleased to see Klimala show further signs of settling into life as a Celtic player, adding the fifth goal after four minutes on the pitch, Lennon added: ‘He should be delighted with himself.

‘He’s come in and he’s really hungry. He knows he’s got work to do and he’s prepared to do it.

‘It was a brilliant goal and it’s a good trait of his, he runs off the back of people and he’s got that strength now that he worked on.’