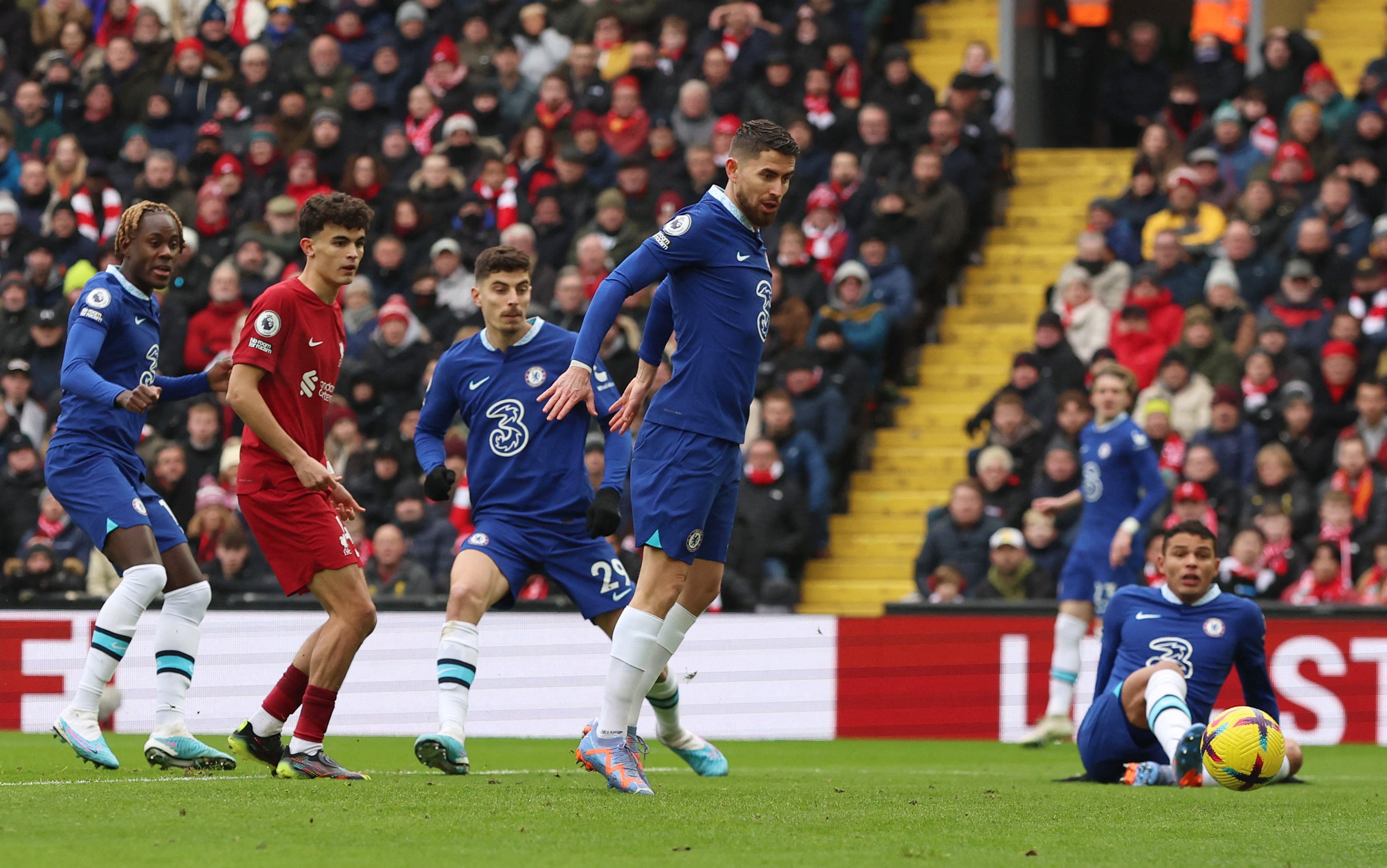 They could at least reflect on some encouraging signs from two of the arrivals in a spending spree that is approaching half a billion pounds. Benoit Badiashile made his second start, and looked an upgrade on the dropped Kalidou Koulibaly – even if that means a summer signing is a reserve already – and combined well with the typically excellent Thiago Silva. The centre-back twice posed a threat in the Liverpool box, too, suggesting he has a set-piece menace. 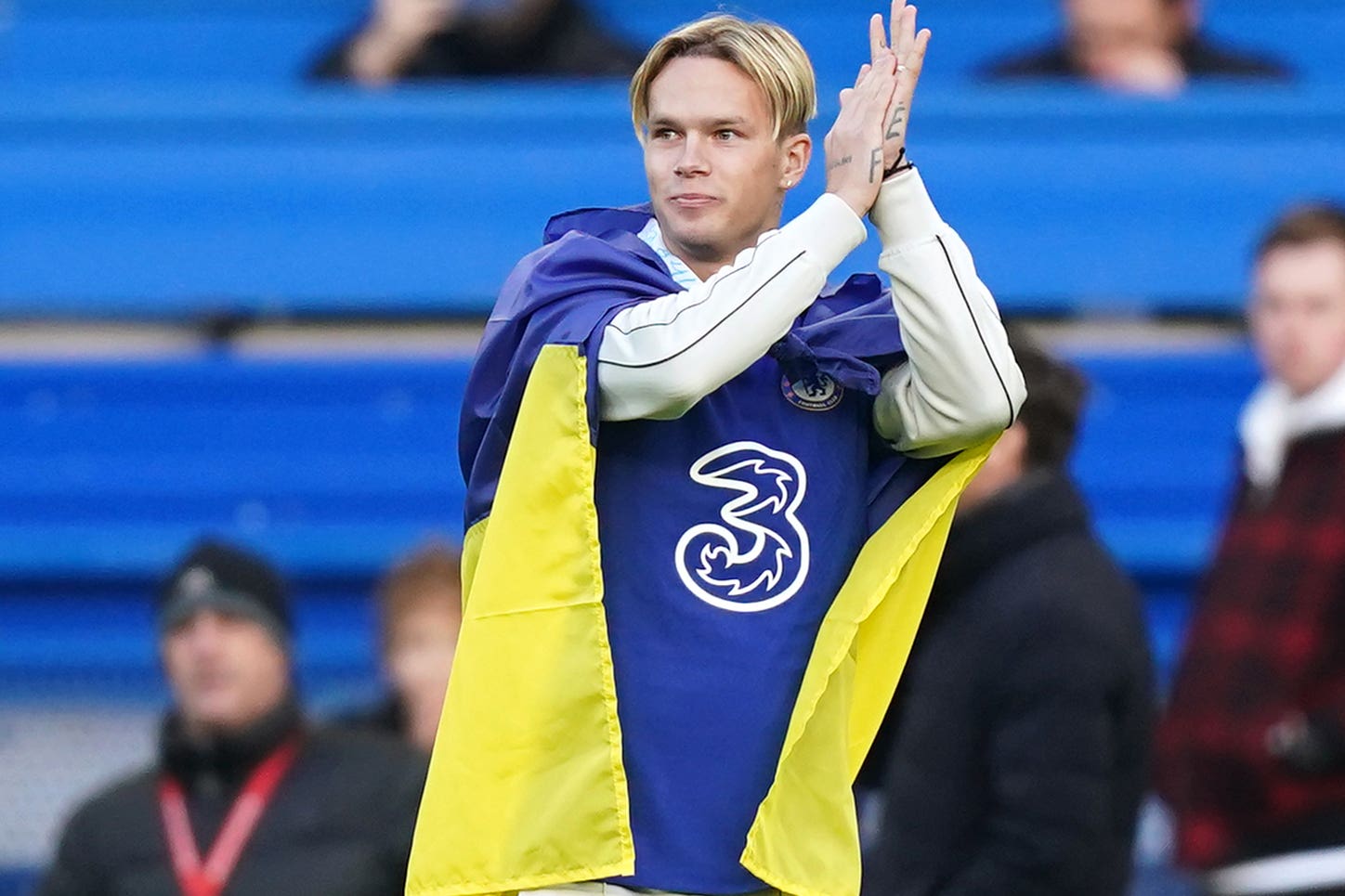 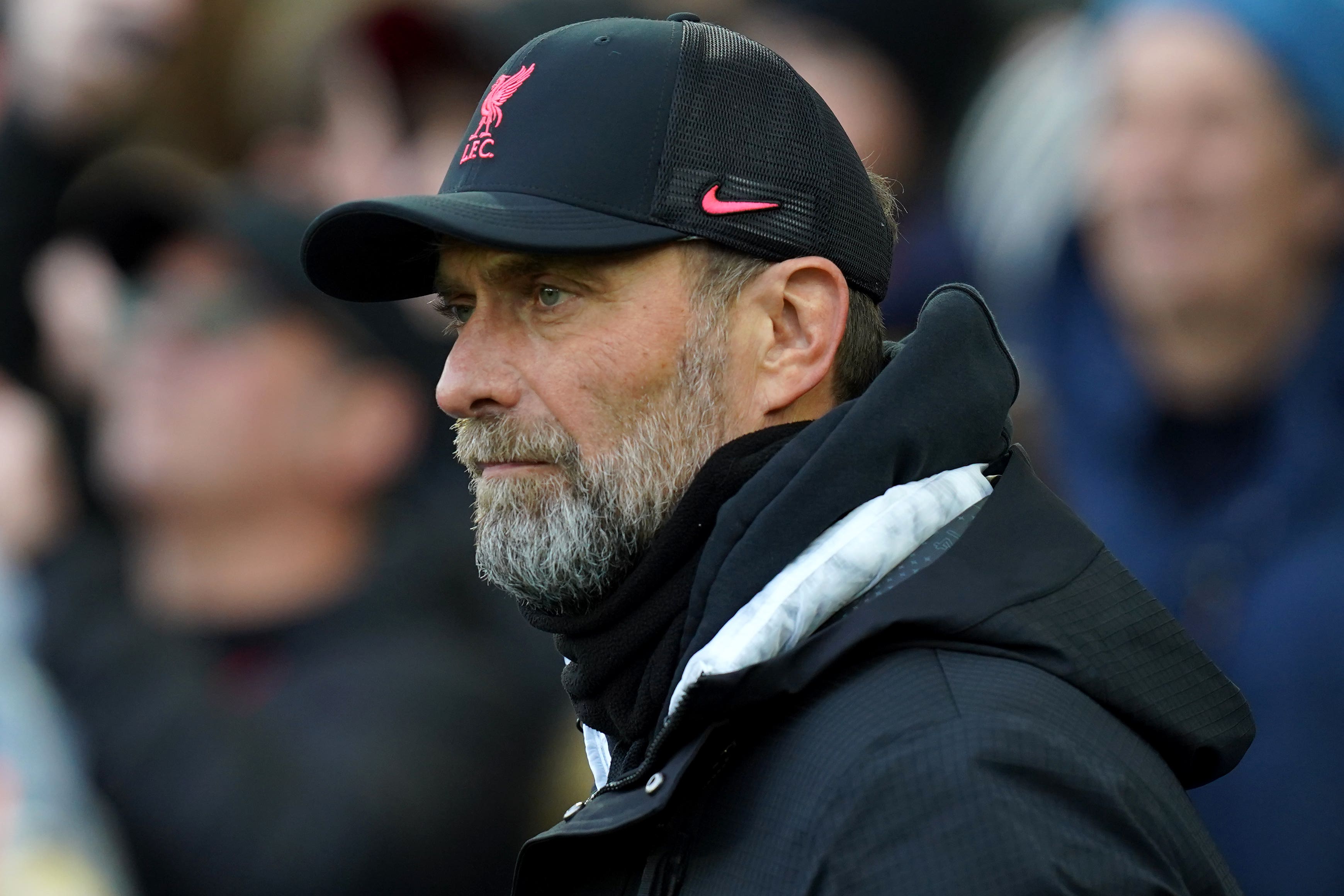 Graham Potter opted not to start with Mudryk. Instead, his debut lasted 35 minutes and could have brought two goals. There was pace and potency. There was a glimpse of the £88m man’s talent when a flash of speed and skill was followed by a shot into the side netting. He miscued a second effort wide. In between, a moment of acceleration brought a booking for James Milner, the 37-year-old who was his immediate opponent. A race felt an unfair contest but the last Ukrainian Milner faced in a Chelsea shirt was Andriy Shevchenko: in this respect, as in many others, he has spanned eras.

Shevchenko struggled to score in a blue shirt and Chelsea’s goals have been too few and far between this season. They could rue the excellence of Alisson, who denied them victory in the FA Cup final last season, as well as a VAR decision. Liverpool’s habit of conceding first seemed to continue when Kai Havertz set off in celebration after converting the rebound when Alisson had pushed Silva’s shot on to the post. The goal was given then chalked off, the German contentiously deemed slightly offside. 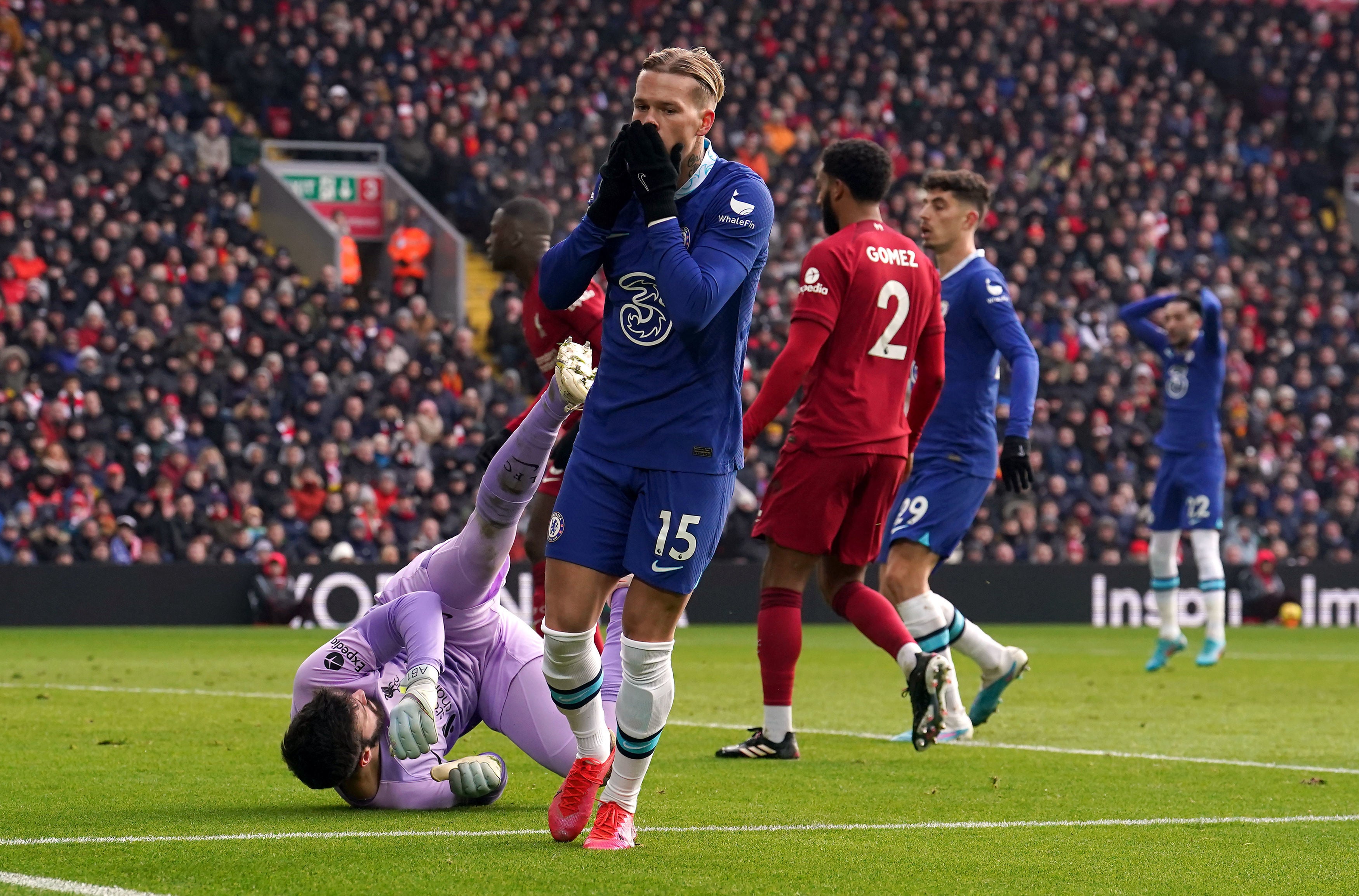 Badiashile had met Conor Gallagher’s corner for the disallowed goal and, but for a brilliant reaction stop from Alisson, would have opened his Chelsea account when he stooped to head. Hakim Ziyech was the provider and the Moroccan had bright moments; one glorious solo run was marred by a wayward finish. Havertz had posed problems with elusive movement. The German found Lewis Hall, who needs a goal to cap an otherwise impressive start to life in the Chelsea side, when he arrowed a shot wide. That Hall was playing in midfield showed how this team, after 15 signings, retains a makeshift look. It is a work in progress but, and though this was not another damning day for Potter, there is too little progress.

Nor can Liverpool prove they have turned a corner. Klopp retained nine of the team who beat Wolves on Tuesday, with Fabinho and Jordan Henderson omitted as Harvey Elliott and Stefan Bajcetic started, but that victory scarcely looked a catalyst for a revival. They at least kept a second consecutive clean sheet, albeit with the aid of the officials, and Andy Robertson was their outstanding player.

But it was another disjointed display. Liverpool lacked fluency as they struggled against Chelsea’s pressing. In a mediocre first half, and as unforced errors outnumbered moments of quality, Potter’s side were at least better. Liverpool showed more intent thereafter. They gained a threat when Darwin Nunez came off the bench and he had a late chance to turn match-winner, but picked out Kepa Arrizabalaga with a rasping strike. Trent Alexander-Arnold, who came on to end Milner’s trial by Mudryk, sliced a shot over. 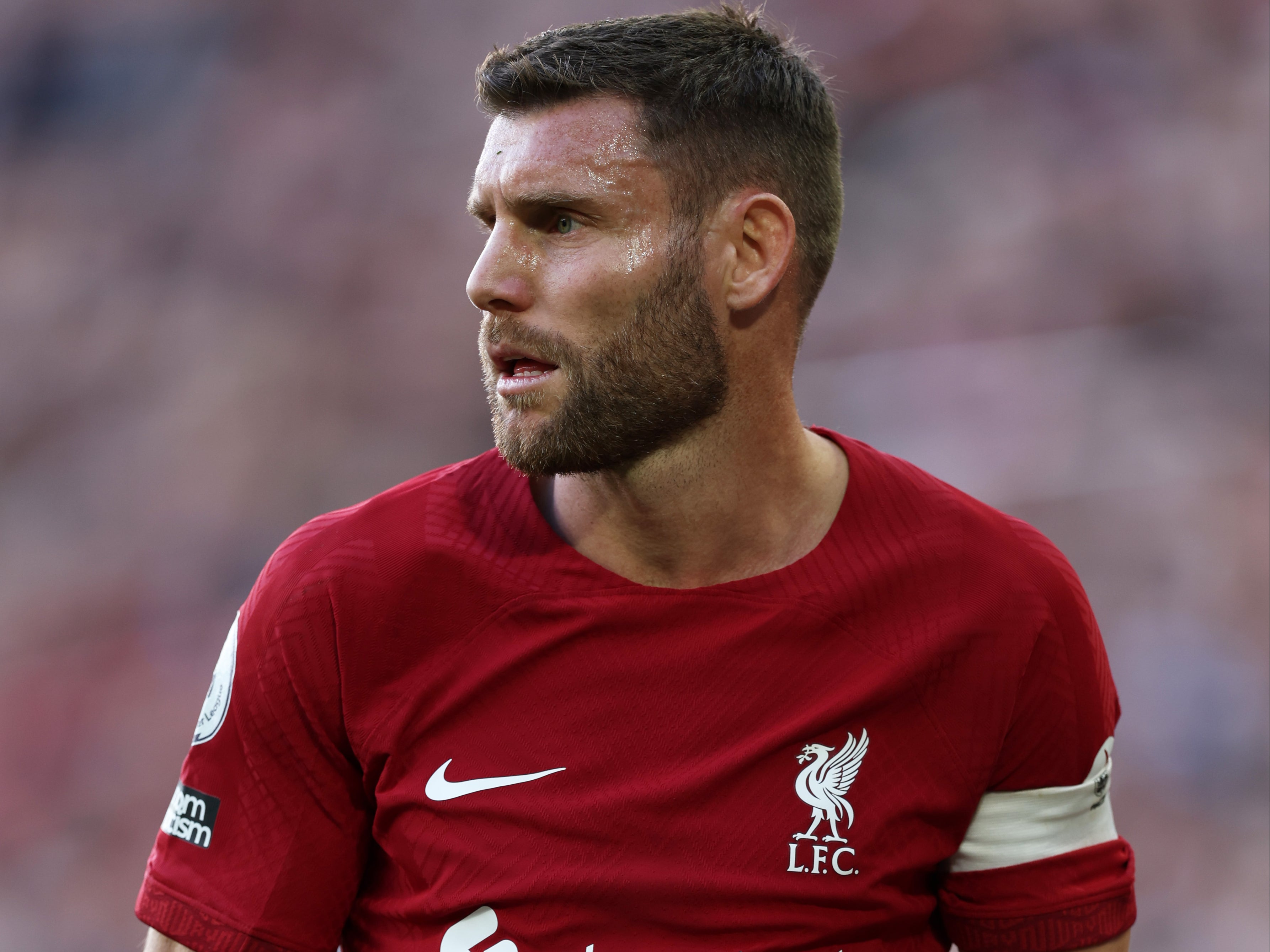 But most of the chances fell to their January arrival. Four games into his Liverpool career, Cody Gakpo is yet to open his account and, if Klopp hoped he would provide an injection of impetus, the Dutchman’s radar needs fine-tuning.

Gakpo skied two shots, even if he created the second opportunity by dispossessing Hall, and he headed over the bar too. He at least drew a save from Arrizabalaga after taking Nunez’s pass on the turn. But Liverpool are yet to win a league game in 2023. Chelsea only have two victories since October. The mighty have fallen. It may take some time to clamber back up again.