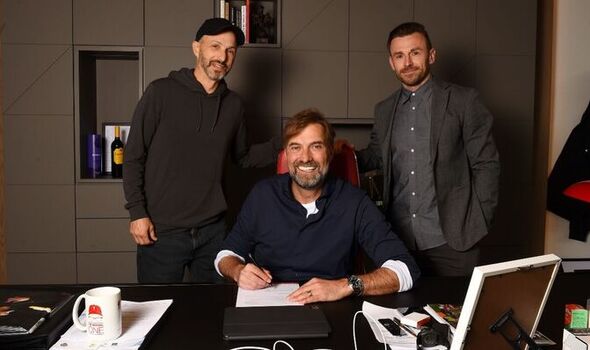 Liverpool have been left ‘surprised and disappointed’ after Julian Ward indicated to the club that he plans to step down from his role at the end of the season – just months after taking over from Michael Edwards. Liverpool’s transfer record over the past few years has been heralded all over Europe with Edwards helping make the club one of the most attractive destinations for prospective targets.

News that he was stepping down at the end of last season came as a surprise to many, but his understudy was already being primed to take up the role. Ward ended up becoming a de facto sporting director last year, which saw him lead negotiations in the Luis Diaz deal while he also took the reigns on getting Mohamed Salah to sign an extension.

He was also the man to get Darwin Nunez through the door at Liverpool while also taking responsibility on Sadio Mane’s exit. It appeared to be the seamless transition Liverpool had hoped for after Edwards announced his plan to depart.

But Ward has now decided he wants to take a break from football also, leaving Liverpool in a hole heading into next season. According to Goal, Liverpool have reacted with ‘surprise and disappointment’ at Ward’s sudden decision.

The 41-year-old will stay in his role until the end of the campaign, at which time Liverpool will be planning to hire a replacement from outside of the club. Ward’s decision is said to be based on a number of factors, including FSG’s planned sale of the club.

Mike Gordon’s decision to step back from his usual role at Liverpool to help oversee the club’s possible takeover was also a deciding factor for Ward. It now leaves Jurgen Klopp without both of his right-hand men behind the scenes at Liverpool.

The Reds boss had worked closely with both Gordon and the club’s sporting director throughout his seven years in charge at Anfield. No decision has yet been taken on Ward’s replacement, but Liverpool are facing troubling times off the pitch with big departures leaving Klopp more and more isolated.

The Liverpool boss’ agent, Marc Kosicke, insisted last month that the club’s off-field situation has no bearing on Klopp’s plans to stick it out at Anfield. “I can assure that Jurgen Klopp has no intention of resigning from Liverpool FC,” Kosicke told Sky Sports.

“The fact that problems could arise this season due to the past intensive season was taken into account by the club’s owners before the start of the season.

“Jurgen enjoys the backing of the people in charge and is in regular contact with them. He loves the club, his team and the fans and is determined to continue and successfully complete the transition in Liverpool. He didn’t extend his contract until 2026 for nothing.”

And Klopp confirmed his intentions earlier this month that he said: “Whatever happens, I am committed to the club.