Everton defeated Liverpool 2-0 to get their first win at Anfield in the Premier League since 1999.

Inside three minutes, James Rodriguez played an excellent ball to Richarlison who fired into the corner to give Everton the lead.

Jordan Henderson went off injured inside the opening half an hour and it could have been worse for Liverpool as Everton captain Seamus Coleman fired his diving header right at Alisson before the break.

The result means the Merseyside rivals are level on points in the table, with Liverpool in sixth just one place ahead of Everton.

Here are the player ratings from Anfield.

Alisson – 6. The Brazilian could do little about the goal, which was an excellent finish by Richarlison. He made a good save to deny Coleman, although it was right at him.

Trent Alexander-Arnold – 6. Like Liverpool, he struggled early but almost equalised with a fine effort from distance.

Ozan Kabak – 5. The January signing never looked comfortable, and was undone for the goal. He let a clearance by Pickford bounce through to Richarlison and was clearly unsettled. Booked for a clumsy challenge on Coleman.

Jordan Henderson – 6. He tried to carry on through an injury picked up, but could not and was withdrawn inside half an hour.

Andy Robertson – 6. The Scot was nowhere near as effective as he usually is going forward.

Thiago – 6. He sprayed the ball around, but not many passes actually went forwards.

Curtis Jones – 6. Integrated himself well within Liverpool’s play, but was often wasteful with no end product.

Mohamed Salah – 6. It was a performance to forget for Salah, who was uncharacteristically wasteful. He should have scored but was denied by Pickford.

Roberto Firmino – 5. You’d be forgiven for forgetting Firmino was on the pitch.

Sadio Mane – 6. Mane was kept quiet for much of the game, although there were flashes of his dribbling ability when he turned Holgate and nutmegged Gomes. His header was right at Pickford. 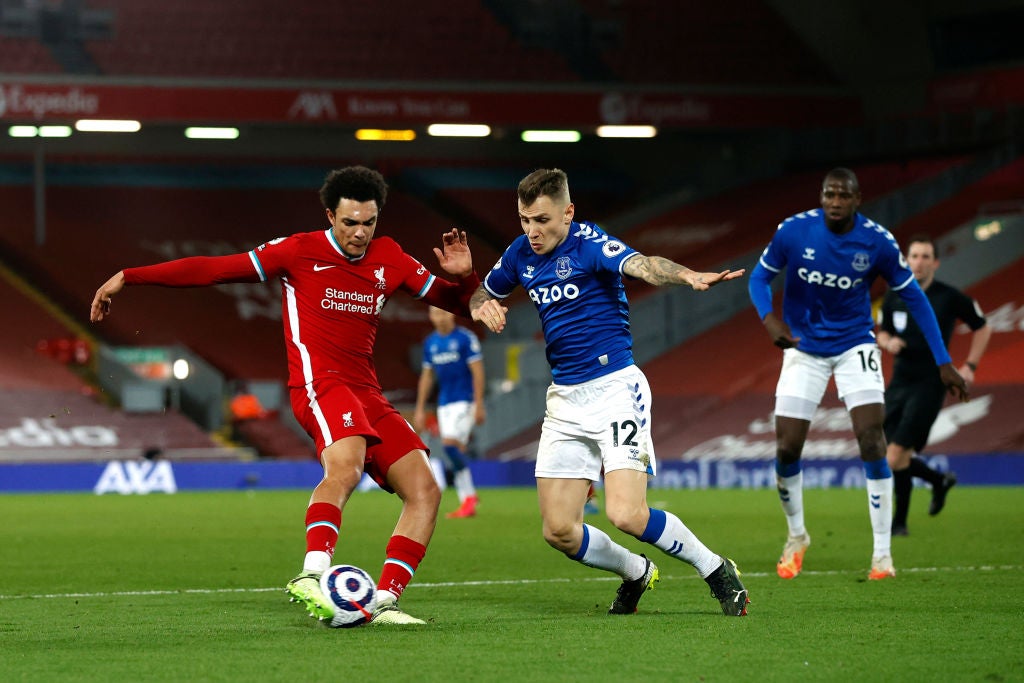 Jordan Pickford – 7. He was rarely troubled, but he made a fine save to smother Salah.

Seamus Coleman – 7. The captain should have doubled Everton’s lead with a diving header right at Alisson.

Mason Holgate – 8. Dealt with Firmino and Mane really well with some perfectly timed challenges. His clearance saved a goal in the second half.

Michael Keane – 8. Keane was excellent in defence, proved with a towering header to clear early in the second half.

Ben Godfrey – 7. Defended well against Salah and made a number of important interventions.

Lucas Digne – 6. Some of his defending was rather suspect and while he was an attacking option, he was poor compared to his usual high level.

Abdoulaye Doucoure – 5. He struggled early, giving the ball away a number of times across the field, but grew into the game as it wore on.

Tom Davies – 8. Davies was excellent in midfield, dominating the midfield and dribbling well.

Andre Gomes – 7. The Portuguese midfielder made his presence known, and never stopped running while trying to break up Liverpool’s play.

James Rodriguez – 7. An excellent pass by James found Richarlison to give Everton the lead inside three minutes.

Richarlison – 7. The Brazilian brilliantly took his chance to score after just two minutes and never stopped running for the Toffees. He should have perhaps added a second but he hesitated.