Liverpool are through to the quarter-finals of the Champions League after a 2-0 win over RB Leipzig, giving the Reds a four-goal aggregate victory.

The Reds led 2-0 from the first leg and could realistically have wrapped up the tie inside the opening half-hour here, with a series of chances being created. Mohamed Salah had the best of them, a one-on-one after Thiago’s outrageous through-pass, but Diogo Jota had a header saved and Trent Alexander-Arnold spurned a big shooting chance, too – while at the other end Alisson had to deny Dani Olmo and Kevin Kampl.

Jota then missed another glorious chance right before half-time, only finding the side-netting from six yards out, with Leipzig boss Julian Nagelsmann making one sub at the break and two soon after to attempt to change his side’s fortunes.

One sub, Alexander Sorloth, nodded an effort onto the crossbar around the hour mark – but Liverpool finally found their shooting boots after that with two fine team moves, Salah finishing one after Jota teed him up and Mane netting the second after a low cross from sub Divock Origi.

Here are the player ratings from the match at the Puskas Arena.

Alisson Becker – 7. A huge early save from Olmo, not often troubled thereafter.

Trent Alexander-Arnold – 7. Could have shot when played in down the right in the first half. Defended well throughout and involved in the second goal.

Nat Phillips – 8. May have set a world record for headed clearances tonight. Caught for pace once or twice but excellent in clearing his lines.

Ozan Kabak – 7. Effective with his clearances too and stood up well to the different attacking approaches from Leipzig.

Fabinho – 9. Back into his natural role and utterly dominant. Didn’t miss a tackle or header, with plenty of intelligent passing besides.

Thiago Alcantara – 8. A quite incredible mid-air kick would have been the assist of the year. Excellent distribution all game long.

Mohamed Salah – 8. Really should have scored his one-on-one chance but eventually buried the crucial opener. Kept running all game long.

Diogo Jota – 7. Caused no end of problems with his pace and picking up loose balls, but spurned two great first-half chances. Set up the first goal.

Sadio Mane – 7. Left frustrated a number of times when free-kicks didn’t go his way but kept making his runs off the ball and got his reward with the second.

Divock Origi – 7. An assist with just about his first touch.

Naby Keita – 7. Involved in the second goal and continued a good recent return. 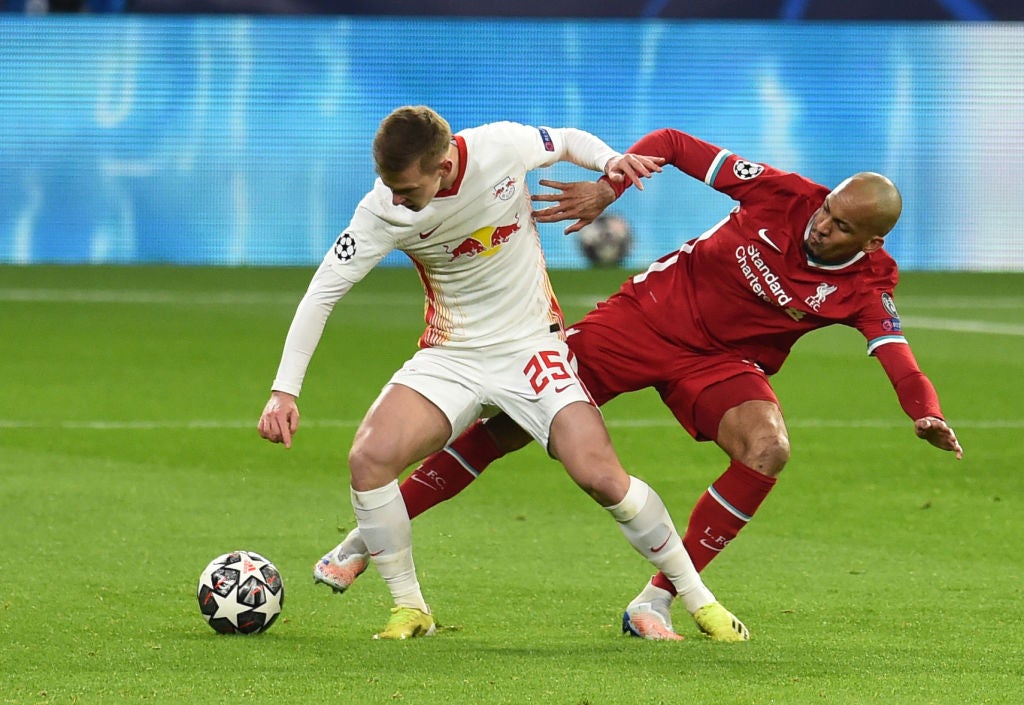 Nordi Mukiele – 6. Strong enough in the challenge but wasted a few balls in the first half.

Dayot Upamecano – 7. A mixed night of silly passes, missed challenges, dominance in the air and a few surges forward.

Lukas Klostermann – 6. Strong enough to beat Salah one-on-one, but didn’t have the pace to catch him running infield.

Tyler Adams – 7. A decent outlet at times, though not much end product.

Kevin Kampl – 6. Moved the ball well through the lines and tried to support the attack. Subbed at the break.

Marcel Sabitzer – 5. Clumsy in the challenge and loose in the pass first half. Didn’t get much better.

Christopher Nkunku – 7. The regular outlet, but they’d have preferred him further forward rather than at wing-back. Plenty of crosses were searching,

Dani Olmo – 6. Had a good early opening but then mostly snuffed out in the first half. Quiet after the brak and subbed.

Emil Forsberg – 5. Very little involvement in the final third in his hour on the pitch.

Yussuf Poulsen – 6. The usual relentless running, but couldn’t get a sight of goal.

Alexander Sorloth – 6. On at half-time to lead the attack. Hit the bar with a header.

Justin Kluivert – 7. Bright and sharp after coming on down the left.

Donny van de Beek: Why is the Ajax star such an in-demand transfer target?