I have felt deeply detached from football for months, despite it being both my passion and job. There can be overwhelming guilt in admitting this given the greater scale of everything else happening in a pandemic-painted world.

Sitting with that realisation, staring at it, trying to talk around the reality is also stirred with a sense of disloyalty to a sport I have loved, that has given me so much. Mix in the worry of if I’m divorcing who I am, and you have a potent What The Bloody Hell Is Going On? cocktail.

I know I am not alone. Supporters, friends and family have shared similar feelings of distance towards the game, as have colleagues and those involved with elite clubs. You might be nodding along reading this. We’ve just been going through the motions, haven’t we?

To understand why the element of detachment has ballooned so widely, to figure out how we can reframe the situation, and to undergo a bit of therapy in the process, I tapped up a sports psychologist, Tom Young.

He talked The Independent through this friction with football in its current state.

MR: A year ago, there was a desperation to get football back in whatever guise to keep the pyramid intact, jobs safe and give us distraction, hope, something to look forward to. There was an outlook of ‘any football is better than no football and then we’ll return to normal next season.’ We’re in the same situation now and perhaps this is a big driver of the discontent?

TY: Yeah. I think when football first returned, everyone was really positive about it because it felt like something normal was coming back. I even started watching games that I would never normally watch, just because it was something to almost connect to. Football probably mirrors the experience of the pandemic in some ways in that people were pretty resilient at the start, making use of their time, and trying to be calm and controlled in the face of this challenge. All while probably thinking that ‘this can’t last that long, we’re going to get through this soon.’ Then you get hit again, when it gets either continued or some things get taken away again: like with a few fans coming back for a short while in certain pockets of the country.

This really tests our resilience and people’s persistence or grit, which is just that ability to get through things. So it’s not bouncing back from a massive setback, it’s the ability to endure through a very long one that no-one has had the experience of before.

On a lesser scale, that has happened in the football world: it came back, we thought, ‘great, let’s get this out of the way. Let’s get this season finished and then we’ll come back stronger.’ And obviously it’s gone on a lot longer than people maybe expected. And that’s then really challenged the way some people think about the game

Football is usually an escape from the realities of life and its problems, but the current form – no fans, emotion brushed away, no sense of occasion – reminds us of the restrictions we’re under…

I think it definitely does still serve as an escape for lots of people. It’s a sense of normality, but the experience just isn’t the same. It’s sanitised, isn’t it? So quite often a trap that people can fall into, is we’ll focus on what’s missing, focus on what we don’t have, rather than what we do.

But it’s just not the same. And probably the thing that’s lacking most is the emotion. Our brain works on words, pictures, emotions. So at the moment we’re kind of getting into words and the pictures, but we’re not getting the emotions in terms of the passion and energy you’d feel from supporters in the stadium.

And football, probably the most of any sport in general, brings people together. It gives commonality. If you go anywhere in the world and find another person who supports the same team as you, you’ve got a bond straight away. And the more we find commonality with people, the more we build relationships. And then the easier we build relationships, the more sense of belonging we have.

And we’ve kind of lost that I would say from the absence of fans and being part of something that is bigger than us. So if you think about football, obviously we get engrossed in results and outcomes, but actually what you remember are the things around it: what you were doing during the game, funny moments with other supporters, going into the ground with your friends or your family, the conversation you had with your mum or dad watching at home… So what we’re missing most is the emotion that brings that sense of connection.

Yes! The experience is now just watching the game, taking in the result and talking about VAR!

When it’s a derby game, you’d have the thing about bragging rights. You’d hear ‘I can go into work with my head held high tomorrow’ and those kind of comments. A lot of people are stuck at home so they’re not even getting that base level of emotion and interaction. 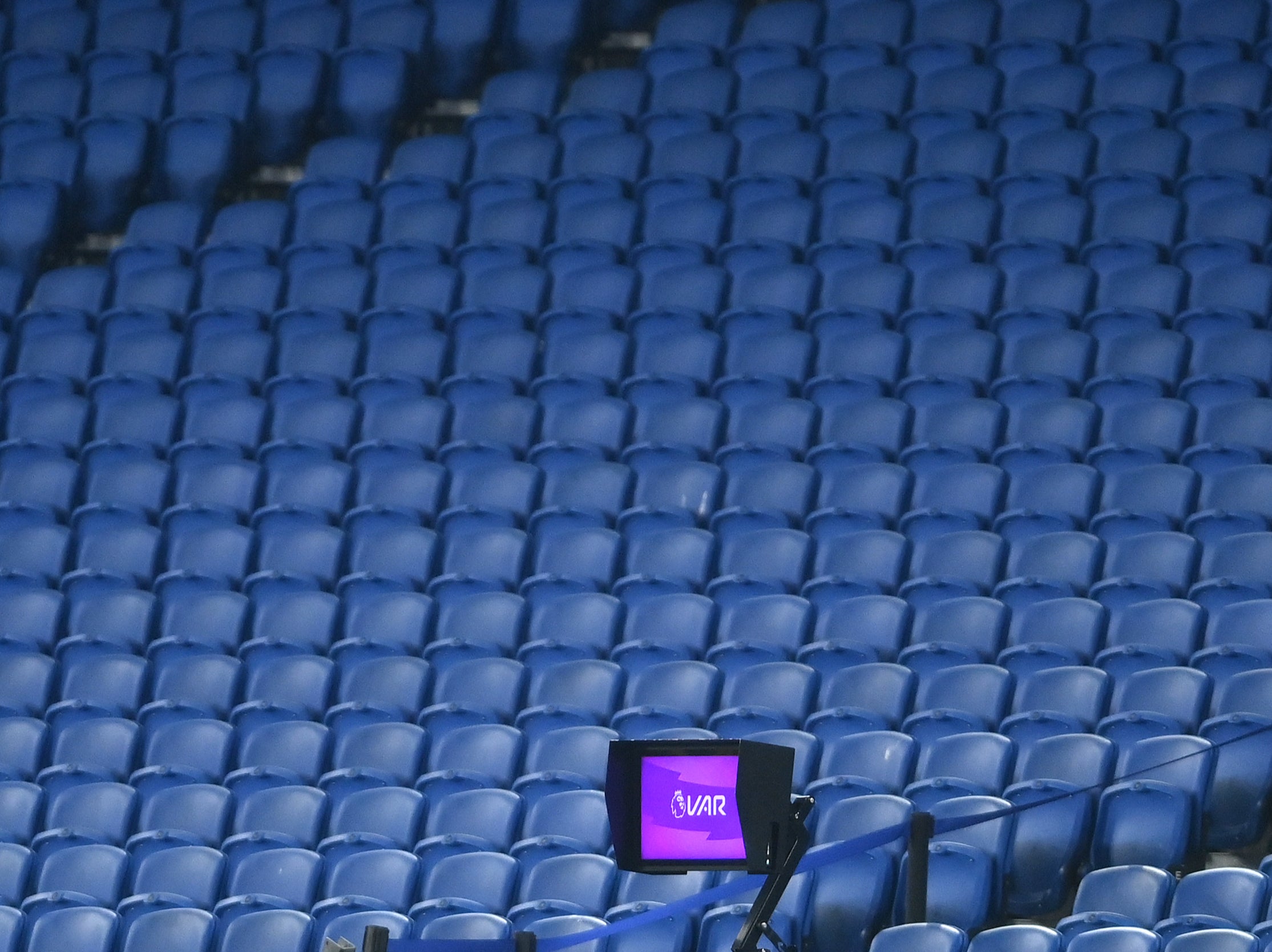 VAR has removed the emotion from football’s natural viewing experience

Even when you hear retired athletes talk about their careers, they don’t always focus on wins or trophies but special moments and relationships they built, bonds in the changing rooms, when they celebrated together with team-mates – the fans’ equivalent of that has been stripped away.  We’ve largely lost the opportunity for those shared moments.

We’ve discussed this from a supporter perspective, but as someone who covers football and feeds off what makes the game unique – the colour, the noise, the emotion, the community – I’ve found it difficult to be invested. For me, the stuff that really gives each match its specific story has been removed. So it’s taxing to source inspiration without those elements I love painting the picture of. Is that natural?

Yes. You’re human! Even in the context of reporting, that connection is so important. Your work is also gained from things around you, whether it’s speaking to fans while you’re heading inside the stadium, travelling with other journalists, getting to be in front of the manager and players…

So losing all of that definitely detracts from how you would normally do your job and why you started it in the first place. And I think that’s where, probably throughout periods of the pandemic, people have had to change the way they think, to change their expectations, to become more rational.

We need to make sure we’re more aware of the way that we think, because at the moment we can’t do things how we would like to do them, or how perhaps how things have always been done. So how do we reframe that and still absolutely maximise our performance within the facts of the situation? In your case, you’re covering a sport during a truly unique period of time, where the human aspects of the sport are arguably even more important – there’s a richness in that.

What would be the steps in doing that?

It’s really important that someone’s mindset doesn’t become a driving factor behind the situation. So we’ve got the facts of the situation that we have to face, sometimes the way we think becomes another contributing factor to the upheaval. It’s normal that we get quite pessimistic or we feel a bit helpless, trapped in a cycle of thinking. Our challenge is to make sure that we’re doing everything we can, within our powers, and that starts by taking ownership of how we think.

It’s not an easy thing to do by any means. Sometimes people expect a psychologist to have a kind of magic trick and it’ll go away. But one of the things is to become more aware of what your thoughts are, how you’re talking to yourself and how that impacts our behaviour. Writing them down or talking about them is a first step. And by the way, this isn’t just about ‘thinking positive’, it’s important to acknowledge how you truly feel.

We often slip into the use of irrational language: I have to do this, I should be doing this, I need to be doing that. That type of language puts us in an irrational state. So we need to try to be a bit kinder to ourselves. The sweeping statements that we make are also unhelpful.

‘This is all awful. We’re never going to get out of this. I don’t enjoy football anymore.’ What we encourage people to be is a little bit more authentically optimistic, not blindly optimistic. So get specific: What are you missing at the moment? How are you finding that difficult? Reminding ourselves that it’s not going to be like this forever, that we’re going to move forward, we’ve already made progress – just really trying to stay on that right side in terms of how we explain things that happen into us.

On another level, in terms of the psychology of persistence, it’s helpful to chunk something up to bite-size elements: for example, for you as a journalist, cover that game, write the report, do the analysis, try to think a little differently. Small steps.  So to recap: watch out for irrational language, try and focus more on specific issues that you can control rather than sweeping statements and put your tasks into more manageable portions.

That advice can be teleported into everything that we’re going through now I suppose? So not just in a football sense, but our personal relationships that we might be struggling with, or just situation in general of feeling so isolated?

Yes, absolutely. And soon we’ll be allowed to do a little bit more. I’d suggest being proactive in terms of that, in terms of rebuilding connections with people and getting that back. Things like beer gardens are on the horizon and you can talk about football with someone you’ve not done that with for a while. That’s lovely to picture. Whether it’s a technique or not, but that constant awareness of how you think is important.

If you say don’t think of a pink elephant, you’re going to think of a pink elephant! So if we just say, ‘don’t think that the stadiums are empty or that sport’s not quite the same at the moment,’ then that’s not going to work. because it’s just going to make you think about it more. So focus on what you have got, on what you can be grateful for. Focus on what football does still give us, and will give us as well going forward. Control the controllables is probably the oldest cliche in the book in terms of psychology, but it’s a cliche for a reason because it’s true!

Imagine what it’s going to be like going into a stadium again or having a conversation with your friends over a drink… We have the Euros coming up and that has so much potential for our connections, for togetherness – think back to the 2018 World Cup and how galvanising that was.

So football is mirroring the pandemic, in where we can see now some light around the corner and that can really revitalise everyone’s passion for the game.

Want to bookmark your favourite articles and stories to read or reference later? Start your Independent Premium subscription today.