Aymeric Laporte struck late as Manchester City beat Tottenham 1-0 to lift the Carabao Cup but who starred and who struggled at Wembley?

The 26-year-old American goalkeeper has retained the faith of Pep Guardiola for every single domestic cup tie that Manchester City have played this season and – as in many of those matches – he had little involvement as the game took place at the other end of the pitch. Did punch one cross clear in the first half and made a good save low to his right in the second.

The experienced full-back was not being tracked by Heung-Min Son and that allowed him to raid forward at will. Walker still has considerable pace even at 30 and his powerful running was a feature of the game, feeding Riyad Mahrez on that right flank, and buying the winger space with his tireless overlapping runs.

The challenge for the Portuguese was to stop the counter-attacks because City were camped in the Tottenham half for much of the match. He was harshly adjudged to have fouled Harry Kane in the first half despite getting the ball with his outstretched boot. Ensured there were no late scares. 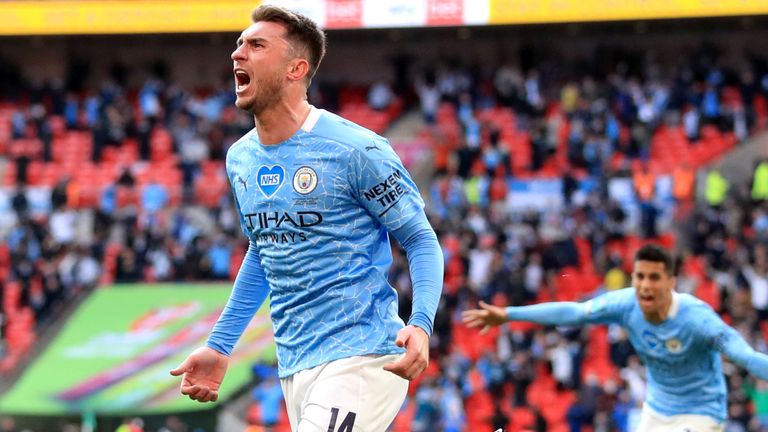 The goalscoring hero. With John Stones suspended, this was an opportunity for the Frenchman to re-establish himself in Guardiola’s preferred line-up but, even as Spurs struggled to create, there were two uncomfortable moments in the first half. Fortunate to escape a booking for a foul on Lucas Moura, he was finally penalised for a similar offence later in the half. Had the last word.

⚽️ Aymeric Laporte has scored 2 goals this season – both in @Carabao_Cup, against Arsenal and Tottenham

All 8 of his @ManCity goals have been scored away from the Etihad (7 away, 1 neutral) pic.twitter.com/JRLbEFCmUA

Cancelo has spent much of the season drifting in from the right, but he enjoyed himself on the left here. Sprayed one wonderful long-range pass out to Mahrez on the other flank before forcing a smart save from Hugo Lloris late in the first half. Had more defending to do in the second period but was generally impressive in his work throughout.

Preferred to Rodri at the base of the midfield, the veteran Brazilian might have found himself swamped due to the congestion as Spurs looked to defend narrow, but gave away possession just twice in the opening 45 minutes. Was booked for clipping the heels of his opponent when stopping a counter-attack and had a shot on target – a header saved low by Lloris.

The imperious Gundogan provided the calm amid the chaos of a frenzied cup-final atmosphere. Popped up in the box a bit more in the second half, heading over when stretching to reach a Mahrez cross on the hour mark before volleying wide of the near post with his left foot late in the game.

Operating in the No 10 role, De Bruyne had the freedom to find space wherever it may be and used it to good effect when drifting right and whipping in those dangerous low crosses. Struck the wall with a free-kick and was hacked down by Sergio Reguilon. His probing passes continued to trouble Tottenham until he provided the assist for Laporte’s winner.

Spent much of the evening teasing defenders on that right side, as has become his habit. Showcased that trademark gorgeous first touch before firing a shot wide of the far post, then put another shot just over the bar soon after. Finally tested the goalkeeper late in the second half but Lloris was up to it. Such a threat when running at the back line.

⭐️ @Carabao_Cup Final Man of the Match, @ManCity’s Riyad Mahrez
Completed 40/47 passes (20/24 in final 3rd)
3 chances created
4 shots, 1 on target
Made most League Cup apps in last 3 seasons, this was 1st app in the final – had been unused sub in last 2 pic.twitter.com/C01uwjgVZY

The star of last season’s final produced another classy performance at Wembley, his silky skills yet again a joy to watch. There was a brilliant bit of skill to dart away from defenders early on and he came close to the opener when hitting the post via a deflection off Toby Alderweireld. More delightful touches followed in the second half. So talented.

Those twinkle-toes in the opposition box can be so dangerous and Sterling’s mere presence there had Spurs on edge. He was a little wasteful when the chances came his way – losing possession when well-placed and seeing another shot blocked before dinking the ball over Lloris only to see his effort drift wide of the far post. Won the free-kick from which City scored.

Was ready to come on to attack the free-kick from which Laporte scored but had to settle for celebrating wildly on the touchline instead. The substitution went ahead and the holding midfielder helped see the job through.

The second substitution by Guardiola introduced a man who was perhaps a little unfortunate to miss out on a starting place. Brought his usual energy to the game late on.

Should have been worked harder given City’s dominance but consummate pro when called upon. Made sure with an early overhit corner, denied Cancelo at the end of the first half with a smart diving save and produced a strong right hand to deny Mahrez after the interval.

Used strength well to snuff out danger during City’s blistering start and created team’s first chance with a teasing cross that belated raised pulses of Spurs fans. Largely measured performance from a player prone to tempestuous moments – but then needlessly gave away free-kick from which City scored.

Had Spurs’ only effort at goal in the first half, dragging wide, and up the other end, made brilliant block to thwart Foden – even if the ball was sent crashing onto the post. Marshalled defence, solid in the air throughout and made a game-high eight clearances.

Guilty, along with his defensive team-mates, at times of inviting pressure by trying to play out from the back but defensively sound. Crucially got body in the way to deny Sterling in the first half and Mahrez in the second.

Got done several times in the opening stages by Sterling, then forced to barge Foden off balance when eluded again. Sloppy in possession on several occasions and looked short on composure as well as focus, seeing yellow after hacking at De Bruyne in frustration. Looked more insulted than injured after coming out worse in tussle with Walker that failed to bring the punishment he had hoped for.

Shouldered much of the dirty work in overawed midfield and made several key interceptions and clearances. Gave Reguilon a tongue-lashing after over-hitting a pass inside the box; right place, wrong player. 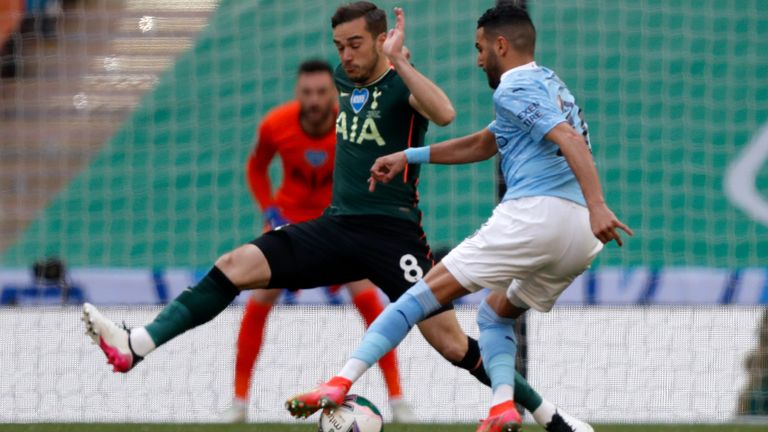 Made first start since the Zagreb debacle, with Tanguy Ndombele dropping to the bench, but game largely passed him by as Spurs’ strategy to try and play through midfield crumbled against swashbuckling City. Tidy enough after the break but one loose pass sparked sarcastic cheers. How we’ve missed you, fans.

Wasteful on rare occasions he found himself in threatening positions but forced Steffen into a smart stop after the interval. Replaced by Moussa Sissoko midway through the second half.

Pace and intent with galloping runs made him Spurs’ only half-threat in a lacklustre first period. Battled well too, showing sense of occasion, but – a little surprisingly – replaced by Gareth Bale not long after the half-hour mark.

Loose early pass almost let in Sterling with just five minutes on the clock. Neat as always on the ball but ineffective with it and beaten too easily in his duels. Did not muster a shot. 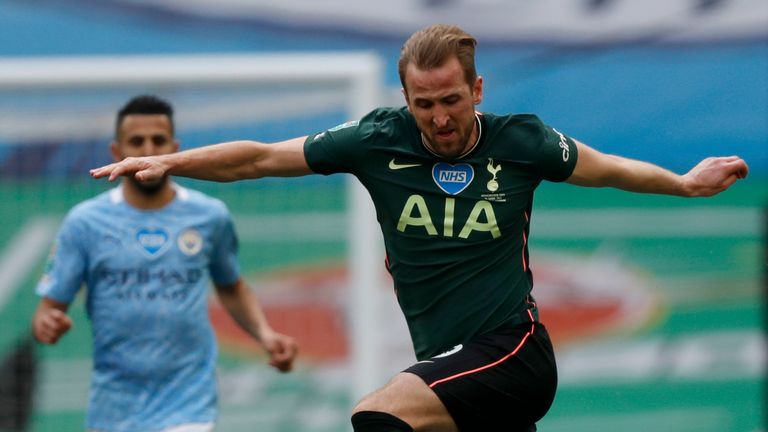 Declared himself fit but had had only two touches in total – as opposed to Sterling’s nine in the Spurs box – as the 20-minute mark approached. Made a couple of important defensive clearances from set-pieces and more involved as playmaker after the break but failed to have an effort at goal and did not look ready in truth.

Sparked a couple of counters by winning back possession but too easily beaten in the air by Laporte.

Flashes of nice link-up play but failed to have an impact where it mattered on the big stage.

Late run-outs for Dier and then Aurier respectively but not enough time to change the game.

Manchester City will now turn their focus to the Premier League and Champions League.

Manchester United’s draw at Leeds means City are 10 points clear in the top flight and need just six points (effectively five based on their vastly-superior goal difference) to reclaim their crown from Liverpool.

If Guardiola’s side beat Crystal Palace on May 1, victory at home to Chelsea on May 8 – live on Sky Sports – would secure the title.

Having ended their Champions League quarter-final hoodoo under Guardiola, City are also gearing up for a big semi-final clash against Paris Saint-Germain, with the semi-final first leg set for April 28 and the decider on May 4.

Win that tie and they will face Real Madrid or Chelsea at the Ataturk Olympic Stadium in Istanbul on May 29.