Man United 1-3 Chelsea: Sam Kerr and Lauren James star as the Women’s Super League Champions showed their experience putting the Blues level on points with Arsenal at the top of the table

If this was a test of Manchester United’s title credentials, they fell short – but only just. Chelsea edged a game dominated by mistakes, but it was the quality of Sam Kerr and Lauren James that made the difference.

Their two goals in four second half minutes put the Blues 2-0 ahead before Alessia Russo’s strike gave United a glimmer of hope with 20 minutes to go. But as the hosts pushed forward for an equaliser, they left themselves exposed and Erin Cuthbert wrapped up the points with a deflected strike in added time.

The difference between these two sides is depth and experience. Chelsea, Women’s Super League champions three years running, have it in abundance. United are catching up, but they are not there – yet. 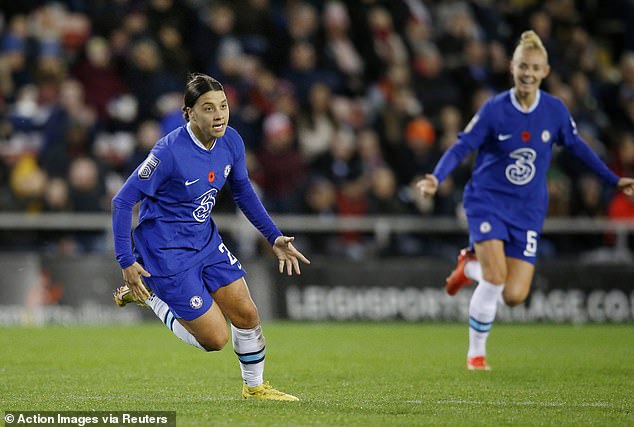 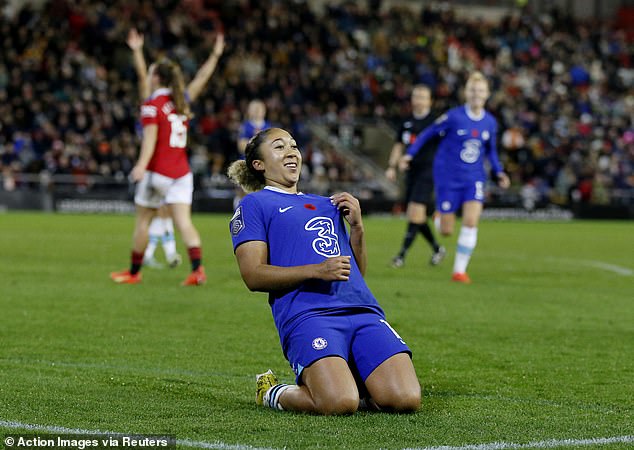 ‘We lost the game on speed of thought and concentration,’ Skinner said.

‘It’s those second half focus points that we need to be better at. We acquitted ourselves much, much better than we did last year. There are things we’ll definitely learn and it will only feed our hunger for the next fixtures coming up.’

Only United and Arsenal had won every game before this weekend’s round of fixtures and the Gunners, who beat bottom-of-the-table Leicester 4-0, have been by far the best team in the league this term. 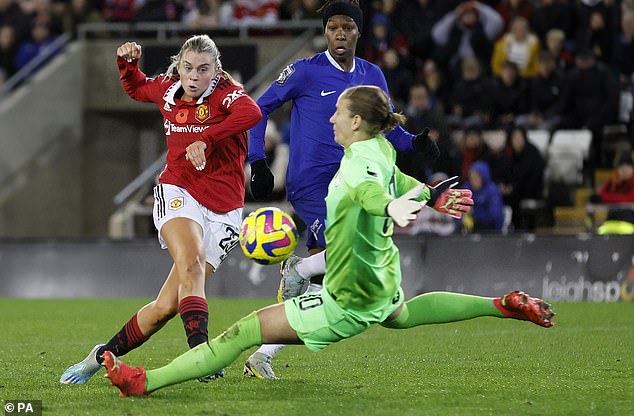 Chelsea are yet to hit their top form but they are still winning and they will have manager Emma Hayes back in the dugout after the international break.

‘I think we deserved it [the win],’ said general manager Paul Green. ‘We knew we had the weapons in our squad that could hurt them and coming here and scoring three [goals] tells that story. I think we’ve got a lot of momentum behind us in this period and I think we are getting back to our best.’

It was United who had the first real chance of a quiet first half as Russo almost carved out an early goal. The forward cut the ball back to Ella Toone inside the box and her deflected shot was parried by Ann-Katrin Berger before Nikita Parris sent the re-bound into the side netting. 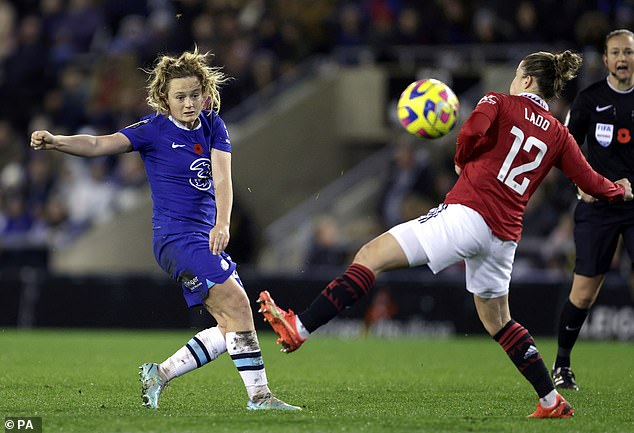 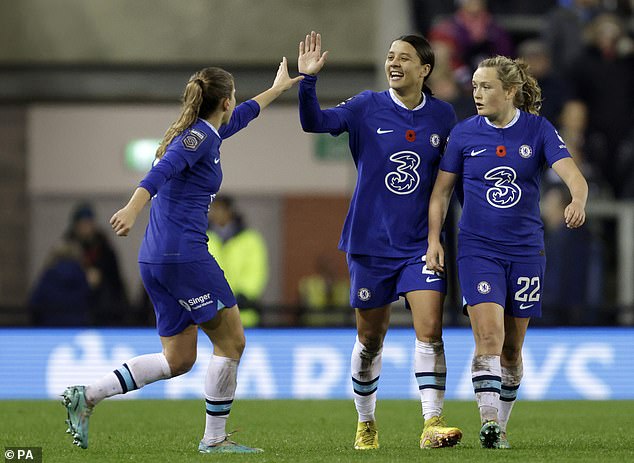 Chelsea should probably have had a penalty when Maya Le Tissier clashed legs with Guro Reiten, knocking the forward to the ground, but referee Cheryl Foster was unmoved. Niamh Charles then forced Mary Earps into a fine save before Pernille Harder headed a Sam Kerr cross wide.

The Blues almost gifted the hosts a goal just before half-time as Millie Bright’s pass across her box was intercepted by Toone, but the defender got back well to block the forward’s effort.

Instead, it was a defensive lapse from United that broke the deadlock in the 60th minute and ended their run of consecutive clean sheets. 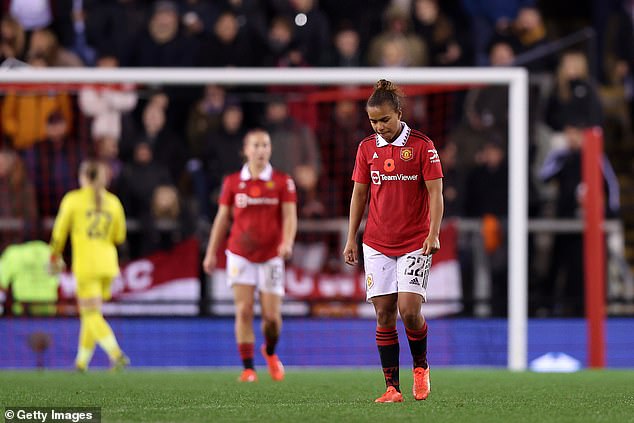 Millie Turner’s pass was cut out by Sophie Ingle and the midfielder played through Kerr, who held off Le Tissier to finish past Earps.

Chelsea had found their groove and four minutes later they had a second. Kerr raced on to a ball over the top and fed James, who fired a low strike into the bottom right corner.

United stayed in the game and pulled one back in the 71st minute. Toone pounced on a mistake from Cuthbert and played through Russo, who kept her cool to slot the ball past Berger.

United pushed forward for an equaliser but left gaps in defence and Chelsea exploited them, with Cuthbert firing in a deflected strike in added time.