Henderson’s eventful home debut began with Gundogan’s ruled-out strike, De Bruyne crashing against the post, and Foden also being denied by the offside flag after finding the net. The ‘keeper’s luck ran out after the break when Stones scored but Henderson responded well, pulling off fine saves to keep out Sterling and Mahrez, before Fernandinho gave him no chance.

Wan-Bissaka had a real battle with Foden and finished the first half as United’s top tackler and joint-top clearance maker. Had no joy on the front foot but did well in his one-on-ones.

Returning to the United defence after suffering a back problem on Boxing Day, Lindelof got back up to speed well. He and Maguire had to deal with the challenge of City’s attackers not playing in a usual striker role so positioning was key in open play. But it was his missed clearance from the free-kick which allowed the ball to go through to Stones.

Maguire made vital blocks in the league fixture between these teams last month but could not react quickly enough to cut out the free-kick for the first goal when Lindelof made his misjudgement. Glanced a header wide from a first-half corner but couldn’t lead his team to the final.

Steady down the left flank for United without doing anything spectacular. Found his man with a couple of crosses but was limited by a hard-working Sterling and had a real wrestle with the City man for much of the match. Booked for a shove on Cancelo.

A fine long ball in the first half from Fred should have been controlled and finished by Rashford but the striker missed his touch. Mopped up loose balls well in midfield and worked hard to limit the opposition.

Tidy in possession – he had a 100 per cent passing accuracy in the first half – and keen to join in with attacks when he could, McTominay shot well over from distance in the first period. Was withdrawn with 15 minutes to play for Greenwood as United searched for an equaliser. Pogba has looked like he has been getting back to his best in recent weeks and looked sharp early on, pouncing on a loose City pass before overhitting a cross. Tried to get United going on the front foot after City’s goal and teed up Fernandes for a wild shot but could not be the inspiration.

A poor performance from United’s key man when they needed him to step up. Harmless long-range shots in either half and a miscued pass to Rashford when United were on the break suggested a player searching for something that was not quite there. Wasted a great chance with 20 minutes to go when the ball sat up for him nicely in the box. There were a handful of nearly moments but nothing quite came off for the United striker. He went just too soon and was flagged offside in a move which saw the ball end up in the City net in the first few minutes, saw a fierce shot well blocked by Dias midway through the first half, and then failed to control Fred’s ball to him in the box when he was in one-on-one.

Like Rashford, Martial scored home and away against City last season but he rarely threatened in this one, badly miscuing his best chance when he had a header from Shaw’s deflected cross. Fortunate not to be booked for diving late on as United searched for an equaliser.

Sent on to find an equaliser at 1-0 down but United were soon two behind and a good chance did not come his way.

On for the final couple of minutes – and his lack of involvement will be a talking point with the transfer window open.

Like Henderson, he had an early let-off thanks to an offside flag when Stones deflected the ball into his net but saved well from Fernandes on 10 minutes. That assault on his goal was not sustained, though, and he only had to work one more time. 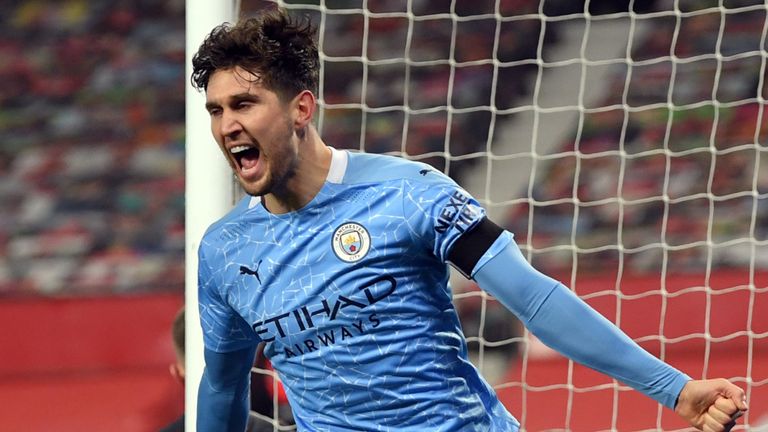 Stones had a let-off inside two minutes when the ball bounced off his chest and past Steffen into his own goal but an offside flag spared him and the defender improved from then on. He was perfectly placed to bundle in the opener soon after the break and City’s defence continues to look assured with Stones alongside Dias.

Like Stones, Dias made an early blunder, misjudging the long ball in the move which led to his team-mate knocking into his own net, but soon sharpened up. There was a vital block to deny Rashford and a sense of authority at the heart of City’s back three, as well as assisting the less experienced Zinchenko to his left. A man-of-the-match performance.

A left-back by trade, the City defender did an impressive job tucking in to form a three. He gives up height and muscle on most of his opponents but with speed and good positioning he helped City cope well with what United threw their way. Showed his ability on the ball with a nice pass through for Foden for his offside ‘goal’ but this was all about his back-foot play.

Expected to play at right-back, Cancelo spent the game in midfield and worked to shut down the spaces Pogba and Fernandes love to operate in. Improved after the break, firing over from distance soon after the opener, almost finding Foden with a great cross, and just unable to set Sterling through, too. Booked for a clash with Shaw after being shoved to the floor but had the last laugh.

Another masterful defensive midfield display – and a super clincher from the captain too. In the first half there were a couple of fine balls over the top for De Bruyne and Sterling and although he was booked at the start of the second half for a foul on Pogba, he won that midfield battle and capped it off by sending City to Wembley with a stunning low strike from the edge of the box which showed off his exemplary technique.

Gundogan was a goal-scorer against Chelsea and he thought he was on the scoreboard again on Wednesday when he netted inside five minutes at Old Trafford – but he had just edged offside from Foden’s cross. So often controls the tempo for City, and while he struggled to get on the ball in the first half – instead busy breaking up United’s play with interceptions – he was more influential in the second. 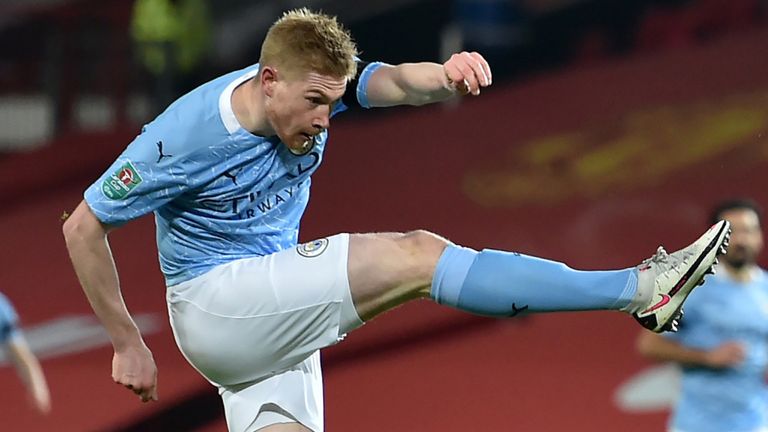 As ever, at the heart of City’s best play for most of the match and almost scored a stunner on 13 minutes when he crashed against the post from the edge of the box. Playing in that more advanced position like he did against Chelsea, De Bruyne looked for space in the right channel to send crosses into the United box. It was his deflected shot which led to the set-piece for Fernandinho’s strike.

Started in City’s strikerless attack but Mahrez was quiet for much of the opening 45 minutes. Saw plenty of the ball but his involvement was little linking passes from deeper areas rather than doing damage higher up the field. He came alive on the hour mark, forcing Henderson into a brilliant save, but this was not his night.

Backed up an impressive display at Chelsea with another good performance. Could have had an assist when he crossed for Gundogan to score from an offside position and was then the victim of the flag himself when he finished brilliantly on 24 minutes. It was his free-kick which bounced through for Stones to score and he almost added another himself when stretching for Cancelo’s cross. Becoming a key figure.

Defended from the front brilliantly in the first half, winning the ball back for City more times than any other player (four) but did not quite make his moments in the box count. Ran into Shaw when he burst in from the right flank in the first half, and – despite impressive hang time – could not quite direct his header beyond Henderson in the second.

On for Mahrez the final 10 minutes to shore things up but his defensive midfield partner Fernandinho meant his role was not as vital as it might have been.

The Carabao Cup final will take place at Wembley on Sunday, April 25, with kick-off at 4pm.

United are then back in Premier League action at Burnley on Tuesday, January 12, live on Sky Sports Football for an 8.15pm kick-off, while City host Brighton on Wednesday, January 13 at 6pm.