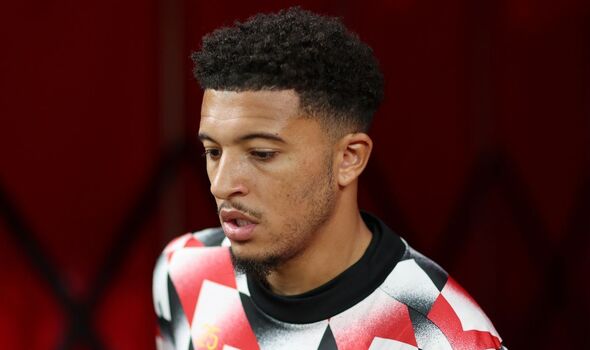 Erik ten Hag has raised further doubts over the return of Jadon Sancho at Manchester United, stating he still does not know when the £73million winger will seal his comeback following a two-and-a-half-month lay-off. The England international was ordered to train alone in Holland with one of Ten Hag’s recommended coaches in November in a bid to get his season back on track following an alarming dip in form.

After starting the campaign on a positive note, illness disrupted Sancho’s momentum and saw him lose his place in the United starting XI.

But before he knew it, he was cast aside by Ten Hag following his concerning demise and told to train at the facilities of OJC Rosmalen in the Netherlands to clear his head.

To make matters worse for the player, Sancho also missed out on England’s World Cup squad after failing to force his way back into Gareth Southgate’s set-up.

While the former Borussia Dortmund starlet is now back at Carrington with his United team-mates, Ten Hag is still not convinced Sancho is ready to return – both in his mind and in terms of his physical conditioning.

The Dutchman said: “He was in the Netherlands but the good thing is he is back in Carrington and that shows he is making progress and he is ready for the next step.

“I think many top athletes, in football and also in other sports, sometimes it’s good to go away from the place where you are at daily to get a new vibe and a new experience. This can give you the right push to get back on track.

“Football players aren’t robots and we thought that, in cooperation with Jadon, it was the best choice.

“I would like to have Jadon back as soon as possible. But some processes you can’t force – and this is one of them.

“So I also have to show patience. We have some hurdles to take, but I think he’s in a good direction.

“In this moment he is not fit enough. I hope he can return quickly but I can’t say a duration of how long it will be.”

Sancho has been silent throughout his period of rehabilitation, recently switching off his social media channels in a bid to rebuild focus.

It’s understood he is wholeheartedly committed to turning his fortunes around as he eyes a statement comeback as United continue to improve on the field.

The tricky dribbler has scored just twice this season for United, netting in wins over Liverpool and Leicester earlier in the season.

He can also take great inspiration from team-mate Marcus Rashford, who endured a similar barren run last season when he was not enjoying his football following a difficult European Championships with England.

Now Rashford is among the goals and back to being United’s main man having also netted three goals for England at the World Cup in Qatar.

There is now extra competition for places at United following the emergence of Alejandro Garnacho, who has taken Old Trafford by storm since forcing his way into Ten Hag’s ranks.