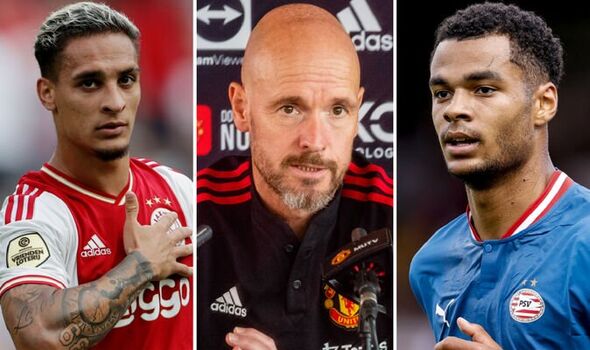 Manchester United are confident they can make Ajax forward Antony the fifth signing of Erik Ten Hag’s regime after agreeing to pay the Dutch club £84million – and they could go for PSV Eindhoven’s Cody Gakpo as well, Express Sport understands. Ajax have held firm on a huge valuation despite the player making it clear he wanted to join his former manager at Old Trafford.

A bid of £76m was rejected last week by the Eredivisie champions despite the player trying to force the club’s hand by not training or being involved in match-day squads. Antony missed Sunday’s clash with FC Utretcht, the second consecutive match he has missed.

Negotiations are still ongoing over the final details of United’s offer. But the Brazil international is expected to become Ten Hag’s fifth summer signing before the window closes on Thursday. At £84m it is thought Ajax’s board will not stand in his way of becoming United’s second-most expensive transfer ever behind only Paul Pogba.

Only three players in Premier League history – Jack Grealish to Manchester City, Romelu Lukaku to Chelsea and Pogba to United – have gone for more money. Antony breaks the Dutch transfer record too.

Previously, Frenkie de Jong’s £73m move to Barcelona was the most money a player in the Eredivisie had gone for. De Jong was of course a major target for the Red Devils this summer but they have been unsuccessful in their pursuit. 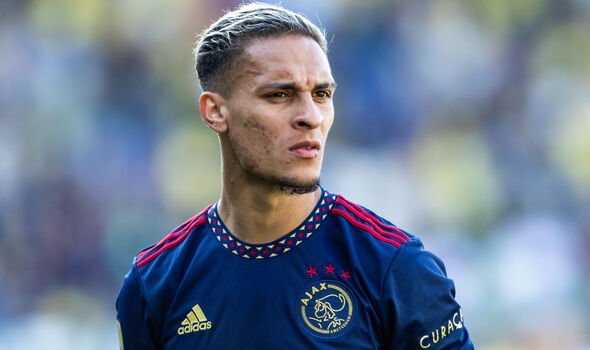 United have brought four players to Old Trafford this summer with Casemiro, Tyrell Malacia, Lisandro Martinez and Christian Eriksen all joining. Ten Hag is also understood to be open to signing PSV’s Cody Gakpo as well.

The Dutch giants missed out on qualifying for the Champions League after being beaten by Rangers and the Dutch attacker told ESPN on Sunday after a 6-1 win over Excelsior: “There are also other options, United are a serious option. I can hear it all. I try to shut myself off from it, but it’s difficult.”

Antony meanwhile said of his future in an interview with Fabrizio Romano last week: “In June of this year, I interrupted my vacation and came personally to inform the managers of Ajax, including new coach, about my wish to leave and that they should consider this possibility, because it was a project for two seasons.

“During the window months, meetings continued and I also received a proposal from Ajax for contract renewal. I made it clear once again: I want to leave. Today, in a meeting with the club, I expressed my old interest in leaving, only this time with a considerable offer on the table.

“Others had already arrived, Ajax refused with argument that they only have five days to replace me. I was very happy in Amsterdam, I won titles at Ajax, made friends and built part of my career, but now I reinforce that I am ready and full of motivation to follow my story and my dreams.

“I hope Ajax fans understand me… because the future for a football player is a totally uncertain thing and the opportunities can be unique. My message is one of gratitude for Ajax, club and fans.

“I’m not asking Ajax to release me, I’m asking Ajax to sell me with the highest bid ever for Eredivisie player. I’ve been insisting on this theme since February so that the club could rebuild the team with peace of mind.”

Antony’s impending move to Old Trafford is set to see Hakim Ziyech return to Ajax from Chelsea. The Moroccan playmaker will be the direct replacement for Antony after two seasons at Stamford Bridge.