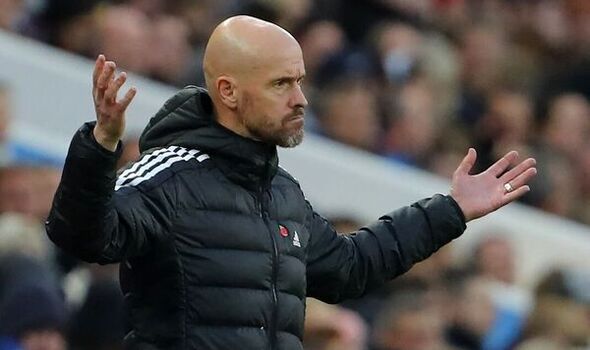 Manchester United head coach Erik ten Hag has been handed a huge blow after discovering their Europa League opponents for the last-16 knockout round. The Red Devils will take on Barcelona in a mouthwatering tie in February, but the Dutchman’s preparations will be hampered by the absence of key man Lisandro Martinez for the first leg through suspension.

Martinez has been one of the signings of the season after settling into life in the Premier League quickly, starting all 19 of the games his team have played since his £56m move from Ajax. The Argentinian is regarded as Ten Hag’s lieutenant and he has been instrumental in helping tighten up the backline, demoting club captain Harry Maguire to a role on the bench.

But the 24-year-old will be out of the clash at the Nou camp on February 16 after picking up his third yellow card of the Europa League campaign against Real Sociedad during their 1-0 win in San Sebastian on Thursday.

The centre-back was overzealous in his decision to fly into a challenge on striker Carlos Fernandez and was brandished a yellow card by referee Georgi Kabakov, which sealed his fate and he will now serve a one-match ban.

Martinez will be suspended after accumulating three bookings in six appearances in the competition. He also cautioned in the reverse fixture against Sociedad at Old Trafford, in addition to his 87th-minute booking against Omonia Nicosia.

And the centre-back will pay a heavy price for his indiscretions as he will miss out on the trip to Catalonia.

Martinez’s absence is far from ideal for Ten Hag, who will be wary of the threat posed by Robert Lewandowski, Raphinha and Ousmane Dembele in the Barcelona attack. But the 52-year-old at least knows there is a fairly straightforward choice for picking his replacement after watching Raphael Varane injure himself against Chelsea last month, ruling him out of the World Cup.

Ten Hag used Victor Lindelof to play alongside Martinez in the 3-1 defeat to Aston Villa and the Swede is guaranteed to keep his place on the right side of the centre-back partnership if Varane is still out injured.

On the left side, Maguire would be required to deputise providing the 29-year-old is fit and Varane is still out when the first leg comes around in three months’ time.

Maguire has only made four starts for United this season after a disappointing run of form, with his individual mistakes costing United dearly early on in the season. However, his improved display in the 1-0 win over West Ham in October showed signs that he could be relied upon in the coming months with Varane out injured.

And the same will apply in Barcelona if Maguire is required to step into the side to face Martinez, with the £80million man using his experience to ensure Martinez’s absence is not sorely felt by his team-mates.